Early this year I got the bug to try one of Chuck Acker’s p kovachii flasks. I looked up a number of places online including emailing LittleFrog rob about how he has started his and took the plunge. When the weather cleared in early March, I received the plants 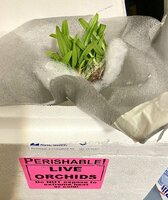 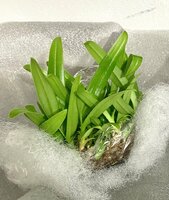 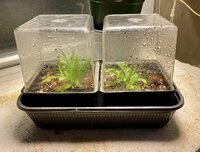 they arrived March 4th, fantastic seedlings! I split them up bigs and smalls in separate trays. The trays are 4”x 4”, mesh bottom. General seedling mix with a little chopped sphagnum, domes on, always sitting in very clean water. I first spritzed them heavily with some of rays quantum total probiotic at the recommended rate, put them near an east window with an led light on a timer. After a few months and they were looking pale, I sprinkled them with a little slow release fertilizer after reading someone’s post that they had done this and their plants looked really nice

last pic is of the seedlings a few days ago. Some of the big ones are touching the top of the domes! The paler ones I think get more sunlight and may have dried a little. I had started to open the domes some, but they looked so happy I just left the domes on. After I found more inocucor I treated them once or twice with it at the recommended rate. Otherwise clear water occasionally from the top and more at the bottom when it gets low. On average there’s 1/2” water in the bottom tray. My goal is to have pots in ebb/flood or trickle water all the time

so far much better than some of my infamous experiments

cnycharles said:
so far much better than some of my infamous experiments
Click to expand...

Your's and mine both, "Nesbitts Orchids" !!!
Save me one.

hopefully the present trend continues and lots to share. How is the Spiranthes?

Automation experiment for my hobby collection