This is Fumi's Delight 'Barbara Ann's Butterbowl' AM/AOS x micranthum 'War Eagle' HCC/AOS, out of a flask from Windy Hill Gardens. They have been very slow growers. The spread is about 9 cm. The edges of the petals are a little wavy and the colors muted. Otherwise, an interesting flower. Mike 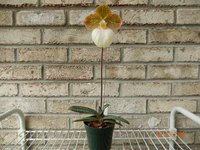 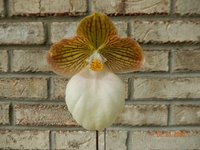 i really like that.
Was the micranthum an 'eburneum'?

That really is a beauty. Wish I had a couple of those guys.

Looks perfect to me. Love the odd brownish colour against a white lip.

Looks fantastic! I have two seedlings from Windy Hill. They are slow growing also. Good to know its them and not me. Aldo, it's great to see what all the wait is about.

Looks great, think I’ll be ordering a few of these! - P x

That's a great outcome! Your plant's flower is much better suited to my tastes than the BL that flowered for me. My plant's flower was white and the tessellation was reduced to mostly being speckles. I'm hoping it improves next time it flowers, but I'm not holding out a lot of hope.
N

Yay Parvi hybrids! Thanks for sharing.

Perfect flower and color, send it to me

What is the leaf span on that flowering size plant?

Bob in Albany N.Y. said:
What is the leaf span on that flowering size plant?
Click to expand...

Bob, the leaf span is about 8 inches. The pot is 4 inches, if that helps as a reference. I have one of these in bud with a leaf span of only 6 inches. They are not very large, but they took years to reach this size. Mike
B

I’m always prejudiced against hybrids and I absolutely love this one.

I bought a compot from Windy Hill in 2016. The first seedling that came to spike was early last year, but it sat low for many months and eventually just dried up. The plant was at 6 inch across with multiple growths via stolons already! It was the smallest yet among the two most vigorous among the bunch. The second vigorous seedling with five new growths (both via stolongs and right at the foot of the mother plant) has been in sheath for many months. It is about 8-9inch wide. I really hope it blooms this year. The rest of the seedlings are tad bit smaller and all single-growth plants.

I have one from Piping Rock from their own breeding. It was in sheath for many months in 2017 and eventually also dried up brown and dead.
It has multiple growths at the moment.

While at it, one of my Barbara Larkin with multiple growths was in bud last year, but it also just sat low for many months and eventually dried up as well. This particular plant was under attack by mites.

Stunning. I have one of those from Windy Hill as well. Seems like a healthy little plant but slow growing, as you said. If mine is half as nice as this one I'll be happy.

That has MoJo Mike!

Mike, how long did it take from the fist sign of sheath appearing at the center to open bloom?
Mine (the ones that blasted and one that's been in sheath for months now) took so long. I'm about to throw them in the garbage bin!! hahaha

Comparison on the Progress of Parvi Seedlings