Cattleya Dinard was registered in 1930 by Charlesworth as (Saint Gothard x Dinah). I can’t access RHS records for awards for any of these classic heirloom plants.

Dinard has 6 species ancestors (warscewiczii 25%, warneri 25%, trianae 12.5%, tenebrosa 12.5%, dowiana 12.5%, and schilleriana 12.5%). There have been three AOS-awarded Dinard cultivars: ‘Kinn’ (HCC, 1999), ‘Blue Heaven’ (AM, 2001), and ‘Veronica’ (FCC, 2016). ‘Blue Heaven’ has been mericloned and is popular. I don’t think I have ever seen ‘Veronica’ available to purchase so it is probably closely held in limited collections. The AOS award pictures, description, and measurements of 'Veronica' are stunning.

Cattleya Arthos was also registered by Charlesworth in 1942 as (Dinard x trianae). I don’t know if it was ever RHS awarded, but it doesn’t appear to have been used in breeding. There aren’t any AOS awards for Arthos and Orchids Limited suspected that it hadn’t been remade in decades, so they remade the cross. Arthos is comprised of the same 6 species as Dinard, but of course with a much heavier dose of trianae (trianae 56.25%, warneri 12.5%, warscewiczii 12.5%, schilleriana 6.25%, tenebrosa 6.25%, dowiana 6.25%). Here is a picture of the current blooming of my plant, made against a black background under an LED panel delivering light rated at 3500 K (a little more red than blue). 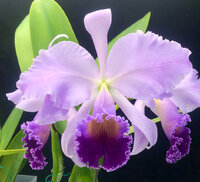 The Orchids Limited Arthos cross used a high quality trianae coerulea, hoping to maintain coerulea coloration and maybe even improve size or shape. Some of the plants from the cross achieved this. I think the following link should take you to a short video that Jerry Fischer made about the cross with some example blooming plants.

Very harmonious color combo. Is it fragrant as well as lovely?
T

I'm not a catt person, that is so beautiful!! the species fanatics probably don't like it
Last edited: Apr 5, 2021

This line of breeding in remaking older hybrids with better parents are producing spectacular flowers. In this case the large blue flowers are quite stunning IMO.

Although first bloom after 11 years is an undesirable trait ...

Side note: I have met the owner of 'Veronica' in Bogota, Dr. and Mrs Uribe. Very sweet couple.
T

It is very fragrant. I wish my nose had developed better to identify species by fragrance but I think I can only be certain about percivaliana right now!

It is really humbling to see how long it can take plants to go from seed to flower. This takes so much time and effort by growers but few want to pay for this.

Leslie, I was hoping that you had maybe seen ‘Veronica’?

Some plants take a while to bloom but when they do, 'VOILA'!! This cross is indeed spectacularly IMO.

Unfortunately I didn't know about 'Veronica' then (September 2019). We had a tour of their new house outside of Bogota, where they set a natural orchid garden with beautiful local species (like huge flowering Cyrtochilums) around the property, set upon a hill with amazing views of the land.

T
Do you know who awarded Cattleya Dinard?
2