I originally purchased 5 of these from a German vendor named Hilmar from Redlands last year from his selfing. This is the first to bloom. Second one blasted here (not sure why) and a third one is in spike at Zephyrus. The other two is thinking of budding lol.

Colour is apple green with a deep green emerald staminode markings. There are however brown dots on the base of the petals. This does exclude it from being complete album. In fact the term album really doesn’t apply to this green flower, but rather alboviride, meaning green and white. Due to the brown dots, it is more quasi-alboviride. Note both leaves and inflorescence/stem are green.

Form is quite nice compared to the amabile album next to it. The petals hold nicely, facing the front, with white tips. 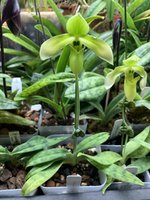 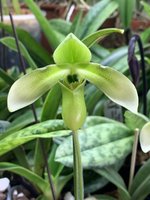 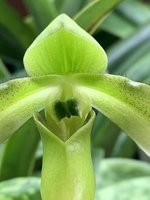 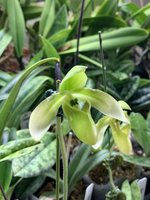 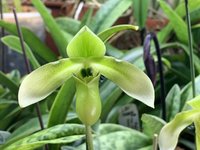 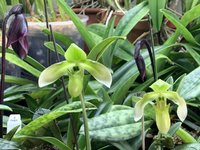 I have the same one from Hilmar, probably a sister of yours, blooming now the second year...

You learn something everyday. I never knew that's what alboviride meant. Thank you for that. This one has better form for sure.
Don
Last edited: Mar 23, 2020

musa said:
I have the same one from Hilmar, probably a sister of yours, blooming now the second year...
Click to expand...

Yes a sibling... any pics of flower? Would be nice to compare the differences.

Don I said:
You learn something everyday. I never knew that's what alboviride meant. Thank you for that. This one has better form for sure.
Don
Click to expand...

Thanks and welcome. The term album only (and should) applies white flowers.

Thanks for comments. I hope it will get stronger next year with even bigger flowers.

Here is mine fore comparison, sorry for the quality of the fotos but at the moment there is no time for better ones:

It blooms the second year in a row.
The inflorescens is extremley short. 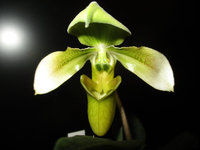 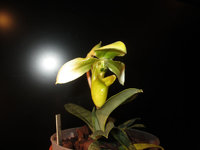 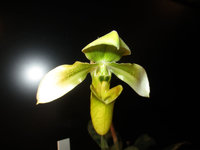 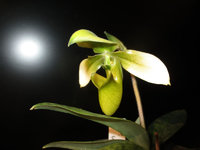 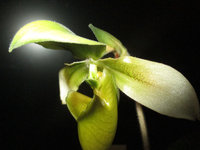 Thanks Musa for the pics. It is great to have two of these to compare.

I notice the following:

1. the flowers have similar shapes; hooded dorsal, open forward facing petals and a narrow oblong pouch. Your pouch rim protrudes a little more, and flares outwards. The staminode shield and stalk look also the same. The proportion ratio of the dorsal sepal and petals look different with your dorsal looking much bigger.

2. the colour spread look similar, with the flower green and petal tips white, and the minute brown dots on the petal bases. The real green colour of yours is hard to pinpoint due to it being a flash pic in the dark. Is it similar to the apple green of mine (looks yellow green now)? Maybe if you get a chance to photograph in natural light if you can (indirect bright light, like a north window). The staminade green veining is also similar.

3. plant size looks similar as well, so I presume the maximum size is reached by my plant. I do notice the short flower stalk has brown pubescent hair in your pic. Is this true or just shadows from the flash? Perhaps the short stalk is a trait in these albums as normal coloured type appletonianums have really tall flower stems (up to 30-50 cm high). Mine now is about 20 cm tall.

I wonder if there is a pic of Hilmar's mother plant and flower for comparison?

Leslie, thanks for your precise comparison.
I agree with you. Only in one point my fotos are misleading, the hairs on the flower stem are white but the stem itself has a slight purple flush becoming green towards the base and the flower. I suspect that is due to the age of the inflorescence because I found a foto from last year, where it is still perfectly green. Would be interesting if you'll make the same observation.

As the flower is coming clearley to its end the colour is changing already to yellow, so I give you a foto from last year as well ( black bachground, south window without flash). Unfortunately there is no better material: 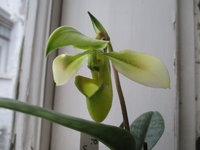 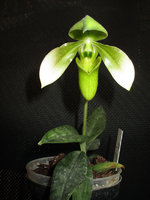 I'll ask Hilmar if there are pics of the motherplant.

Thanks Musa for last year’s pic as well. It closely resembles the colour of my flower now. I love that both of ours have that thick forward facing petals. Makes a big difference in the majestic carriage and presentation.

I did take a picture of the sale pic at Hilmar’s booth. If I can find it again I will post here. I am not sure if that was the mother plant though. The reason is that the petals are narrow and twisted (see my observation and explanation below).

Also thanks Hakone for sharing pics of the immaculatum variety of appletonianum from the nursery. It is actually the correct name for the album variety.

One thing I would like to point out. Most of the appletonianum var immaculatums (that I have seen in Japan) have very narrow petals that twist downwards past the midpoint. I wonder if this differentiates the wolterianums from appletonianums.

Here’s a pic of appletonianum var immaculatum (album) that I took at Tokyo Orchid Nursery last year February 2019. You can see the downward twisted narrow petals.

I also noticed a slight difference in the staminode, in that it has less green veining than both the ‘wolterianums’.

Flowers look overall more dainty in these appletonianums (along with the nursery flower shown by Hakone) while the wolterianums look more chunky. Maybe it’s my eyes? this is real album

according Harold Koopowitz , Tropical Slipper Orchids , paphiopedilum and phragmipedium Species and Hybrids : " paph. appletonianum is closely related to paph. bullenianum ans sometimes the two are difficult to distinguish. Some plants recently named, like paoh. cerveranum seem to be variants from within the Vietnamese populations of paph. appletonianum.Another plant, paph. wolterianum, appears to be a Long-stemmed form of paph. appletonianum.
If one is to make sibling crosses it is best not to mix the various forms. One form of paph. appletonianum , often informally called var. aureum, had petal tips of a yellowish beige Color. Paph. appletonianum f. Album had pure green Flowers. Curiously These Flowers have inflorescence stems that are pigmented with some anthocyanins, so they can not be considered as true Albino forms " , page 120 - 121 .

The unfortunate part is that this appletonianum complex is ever changing and no taxonomist can agree what differentiates one from the other. Appletonianum itself is so variable that all others can fit comfortably in the continuum. That’s why no one agrees and the group is always changing.

That is a peoblem, like in many other cases.
The downward bent apical half of the petals and their narrow shape of immaculatum seems to be quite obvious.
Concerning the staminode besides a difference in colour it seems that the sharp dents are missing, or at least they are strongly bent backwards. Can you confirme that?