I haven’t bloomed this for the last six years. It’s grown a lot and finally bloomed again. Before anyone corrects me about its species status I’ve attached a email from Olaf. 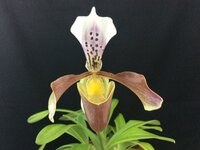 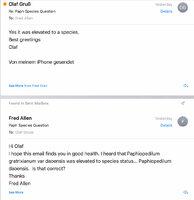 Good job and thank you!

You are joking surely. Just because you can't import anitum into the US its not a separate species!! And this is supposed to be one. What does RHGS say
M

Taxonomic status seems to depend on more than just one authoritative source. First of all: was the new status validly published - and with Olaf's clear cut answer, we would expect, it must have been!
This, though, appears not to be the only and sufficient ground for general acceptance of a new taxonomic status, as also a certain level of consensus in the scientific community (i.e. among botanists) appears to play a somewhat prerequisite role in such matters!

Murray F said:
You are joking surely. Just because you can't import anitum into the US its not a separate species!! And this is supposed to be one. What does RHS say
Click to expand...

I think, Stephen is dead serious, and with good reason. From his recent thread with his gorgeous and awarded P. Wössner Black Wings, we learned that the Australian Orchid Council does not accept anitum, neither as a separate specie in its own right, nor as a variety. They follow Kew in sinking anitum into P. adductum. Stephen thus had to rename his plant P. Johanna Burkhardt to receive his award, even though the taiwanese breeder from whom he acquired the plant sold it as WBW (if I understood him right):

Now I know how exciting it is the receive an FCC! 86.2 pts. In Australia anitum is not recognized as a separate species so while this was purchased as Wossner Black Wings (from my friend Atian Tsai), it had to be 'renamed' for the award. I dont have the official measurements but these are mine -...

The craziness really takes flight, when one realizes, that the registrar at the Royal Horticultural Society, responsible for keeping track of and certifying names for new orchid hybrids, for WBW has P. rothschildianum and P. adductum var. anitum as parents - the latter a botanically non-existing entity according to Kew!

Both can't be right! This mess could be considered purely accademic, if it didn't have - or maybe already have had devastating effects on keeping track of breeding lines. In the Southern hemisphere - or at least within the boundaries of the sphere of influence of the AOC there will, I suppose, be found myriads of all thinkable combinations of WBW crossed with JB, WBW crossed with WBW, JB crossed with JB, etc. etc. ad nauseam - all under the name of Johanne Burkhardt!
Last edited: Oct 12, 2021

To resolve this, Olaf may need to officially describe anitum with a herbarium sample to Kew!

I got a CHM/AOS on this today as Paphiopedilum daoense.

Usually they give a reason for the CHM at the end of description why it is horticulturally desirable, like ‘a smaller vegetative form of gratrixianum’ etc. This description is more of a CBR, a new description standard for a ‘new’ species (which technically should have been given to the first daoense award back in 2017).

Lovey flower and well grown plant, Fred. So it seems more than logical it got an award. Congrats.