Vary small bud opening can anyone tell me why?

This year my Paph. collosum var.Subleave's bud is opening while its still vary vary small dose anyone know why? If so please share.

It is a pretty small variety... Not sure it is abnormal. Was it bigger last year?
C

Yes it was, it was about the size of a normal Maudiae type or complex paph hybrid last year.
Patrick

Not a taxonomist, but I think if it was the size of a 'normal' maudiae it probably isn't var. sublaeve.

Why is it smaller? Good question. Sometimes it happens. Looks like it is growing pretty well. Sometimes a growth climbs up out of the pot (callosums tend to do that) so that there are only root buds and not roots at the base of the fan. In that case I usually get smaller flowers. And I curse a bit, because I don't know why they do that. Flower might get a little bigger as it opens too.
C

Ok thanks so much, it's an 8 growth plant with lots of these root buds you talk about so perhaps after it flowers I should devide it and plant it deeper you see slippers are strange with things like that I grow mostly Cattleyas and they don't do weird things like this 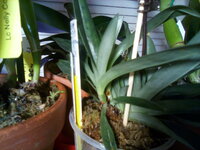 Yep. That is what I mean. It is tricky to deal with, you probably shouldn't divide down to one growth, but it is hard to get the tall one planted properly and leave it with another growth.
C