I split up a very large plant of Trichopilia suavis about two years ago and put some of the divisions on one of our orchid club auction tables. A few people said their divisions had flowered but I hadn't seen any until just last week when I saw the buds coming out. I couldn't believe how large these flowers were in comparison to the ones I'd had before! Last year I put a few divisions into s/h culture and it didn't seem like they were doing anything, though a larger division I put in chc's didn't seem to do anything, either. It looks like this one definitely likes the clay and the kitchen window. I love the fragrance, and wish the flowers would last a long time. There's an orchid show next weekend in Rochester, but I don't think that the flowers will last though I'll keep them very cool. 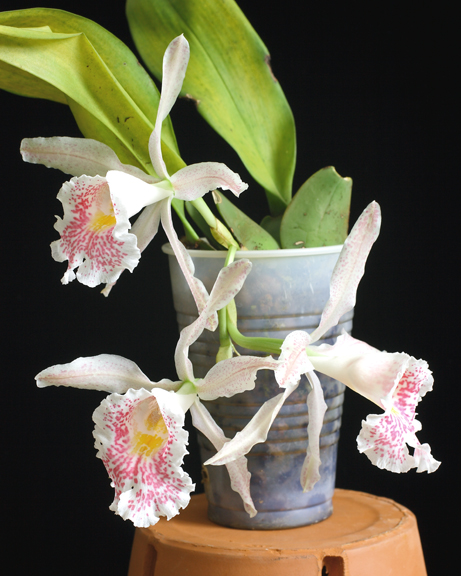 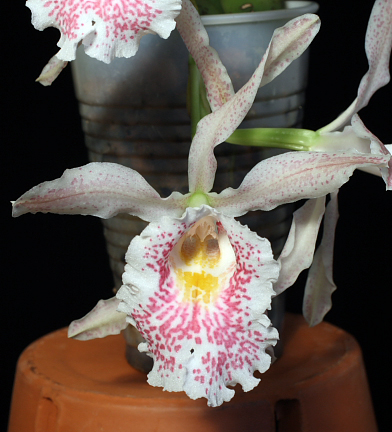 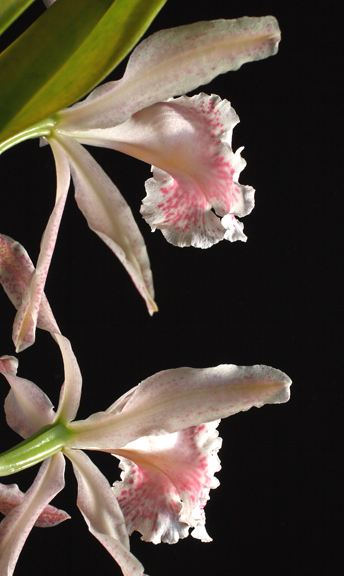 they smell great, too

I have admired this one in catalogs...one day I need to try one. Hope it holds for the Rochester show for you.
G

thanks! it is supposed to be the easiest of trichopilias to grow, and if you can really cool it down in winter it will flower for you. the plant I had was very large when I split it up, and it had flowered twice in 10 years or so because before then I had it fairly warm. once it was cooled, it flowered from one side and then again a month later from a different area. it may have flowered again after that before I split it up, but it grew very faithfully while many other orchids were languishing, not really rot-prone like the others are.
I have a trichopilia tortilis alba that keeps trying to put out new growths and they die back, very fussy. marginata is not quite as fussy but still not easy, a few others are marginally okay; maculata or possibly named incorrectly puts out new growths and flowers intermittently all year, grown on a tree fern stick and though dry keeps growing and flowering though the flowers only last a few days

very, very nice!! I have Gouldii (fragrans X suavis), but am still looking for this one. Jean

I have a mystery trichopilia that I got from tennis maynard in a trade of other plants, someone told him it was a t. suavis 'alba', and he hadn't been able to get it to do much so gave it to me. I'm wondering if it might be a hennisiana or something. It is growing, so hopefully it will flower soon so I can see what it is!

Nice job. I have a small seedling, and I was considering trying S/H. You are encouraging me to do so.

SlipperFan said:
Nice job. I have a small seedling, and I was considering trying S/H. You are encouraging me to do so.
Click to expand...

When I divided up my larger plant, the divisions didn't really do very much for quite a while. I don't think I put them in s/h when they were forming new roots which along with the dividing probably set them back. I think my other divisions are setting new growths so I think they soon would be putting out new roots which is when you really would want to repot it. I had read that sometimes it can help to overpot a bit when putting into s/h, at least with phals, don't know if that would help. You also might want to contact Ray Barkalow to see if he thought that a trichopilia might do better if it had the smaller pellets; these are the larger ones. One thing that the s/h culture would help with is to make the plant a bit cooler because of the evaporating water and cooler is what these like to get to flower.

I have this as a seedling...I think...I hope mine looks as nice when it blooms
N

I've always liked this one, too!

the flowers lasted for the rochester orchid show so I am happy. there are a few other suavis' in displays but this one has the darkest colors and I think the largest flowers. Others have more flowers though. I would rather have nicer, larger flowers. If anyone is in the rochester, ny area they should check out the genesee region orchid society show

She does it again and again - Trichopilia tortilis