This is the first bloom on a small plant of Cattleya lawrenceana (‘Jeffy’s x self) that I bought from Orchids Limited, but they did not make the cross and I have seen it offered by Waldors. 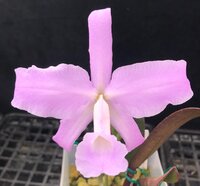 I have not seen lawrenceana available for purchase very often. I think my flower is a concolor as the parent ‘Jeffy’s’ is said to be, although I can’t find a picture of ‘Jeffy’s’. I think the last posting in Slippertalk about lawrenceana was in April 2021 by dodidoki and his flower was also concolor but he didn’t note the parentage.

I don t like it, although it is very rare.This is the second blooming, definitely better than first, first was a tragedy.

Cattleya lawrenceana was formally described in 1885 and must have RHS awards because it was named for a very important leader of the RHS, but only 12 different cultivars have garnered AOS awards and none of them for a concolor variety. Chadwick’s mentions lawrenceana ‘Diane’ as very good concolor and I have seen several pictures of ‘Diane’, but it hasn’t been AOS awarded. I don't know how 'Jeffy's' came about, either.

Cattleya lawrenceana usually has smaller flowers than other unifoliates, although there can be 5 or 6 of them on an infloresence, making for a nice presentation. The flower shape is distinctly different from the other larger unifoliate Cattleyas, especially with its narrow tubular labellum.

Cattleya lawrenceana is also noted to be difficult to grow because it requires warmer nights than most Cattleyas. I have had my plant for a year or two and the blooming growth happened under my care, but I was shocked to see the inflorescence rising. I didn’t try to give the plant warmer conditions than any other Cattleya. It has new roots, so I don’t think the infloresence was a desperation act of a dying plant, but I will have to see what happens this next year. Clearly, I want to see more flowers and it would be nice if they got a little larger as well.

Why would I want to have this Cattleya species, or for that matter any of the other less commonly grown or hard to find unifoliate species like wallisii (eldorado), rex, mendelii, gaskelliana, and warneri? I have a desire to see if I can grow almost every unifoliate species well in my indoor/LED lighting environment and find out how the growth, rooting, and blooming phases I achieve match with what is reported in the natural environment and green house conditions (ala Chadwick lists). Yes, I like the flowers to be attractive, but I am probably more focused on the biology - when it started new growth, started new roots at the base of the newest pseudobulb, and started to bloom! I like keeping records.

Congrats, yours is very nice.I threw away mine after the fourth blooming.Mine was maybe a selfcross with something recessive gene deficiency and produced distorted flowers everytime.

Not bad at all for a first bloom Terry.
Good luck with your quest!
David

Well done Terry. It is a concolor. Can we see pics of entire plant and a follow up bloom pic? I want to see how the petals hold. Is only one flower?

Not an easy plant to bloom for me. I have one for 3 years (or more) that just keeps growing and growing in my warm shelves (20C nights all year), sheaths but no blooms.

Until now… I finally see buds in one of the 4 sheathed growths! It’s a flamea form so let’s see how it turns out. I’m stocked! 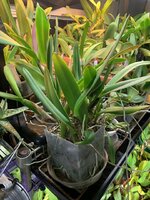 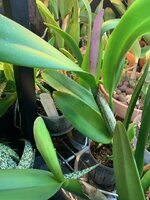 ‘ I have a desire to see if I can grow almost every unifoliate species’ this is what I like about you!

Nice one Terry! I've also got quite a few Cattleya species and primary hybrids but I so far resisted the temptation to purchase this one along with C. rex, dowiana and aclandiae because I thought they would all require warmer conditions. On the other hand I do have eldorado and violacea (yes, ok I couldn't resist

) and they seem to do well in spite of being nominally warmer growers, not to mention the phaleonopsis and vandas that mostly seem cope just fine with Winter nights down to 14 degC (thats about 56F I guess ).

I've wondered if average temperature and amount of light might not be equally important as the minimum?
T

Here is a picture of the pot and plant - single bloom. The tape measure shows that the top of the blooming growth leaf is about 8.5 inches.

Here is a little closer view of the newest growth which had multiple purplish spots similar to what I get with lueddemanniana. Perhaps the pseudobulbs do have the 'reddish hue' that others have noted. 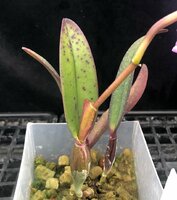 My night time minimum during the last 2-3 months has been 56 F but during spring, summer, and fall my night time temperature minimum will be 65-70 degrees, so maybe if I satisfy the warm growers for enough months they will tolerate a few months with night temperatures lower than optimal.
L

Nice soft color. Thanks for sharing.