This is the second select purpurata from Bela Vista orchids. It’s has the ‘tipo’ (type) colouration.
It’s about 18 months from crossing the Atlantic and has settled down well to northern hemisphere time.
This species is such a good ‘doer’ and grows easily and vigorously.
I‘d recommend it to anyone interested in catts.
The plant was already quite big when it arrived, with maybe a dozen bulbs. I lost three of them during establishment but then it settled down and rooted well.
In the first season there was just a single small growth which didn’t flower.
This year there are three leads, all flowering. There is a total of ten flowers and I removed a further four when the buds appeared to avoid congestion during flowering.
The progress with breeding purpuratas in Brazil is evident in the flower.
It’s barely recognisable from the wild forms with their thin twisted petals. It is probably a tetraploid.This clone has flat petals 6cm across already. What it’s capable of when fully mature is anyone’s guess.
The modern tipos appear the be the most advanced of the various colour forms.
Whether it’s an improvement is up to the grower! 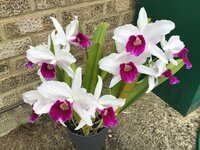 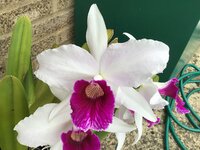 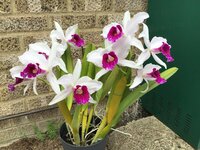 Thanks Leslie, these line bred types are approaching the form of the hybrid canhamiana. The stud plants that produce these progeny must be truly stunning.
The sitting room is now looking amazing. A canhamiana coerulea has also just opened with 12 blooms. Also a werkhauseri that will eventually have eight. I’ve never had a display like this before! 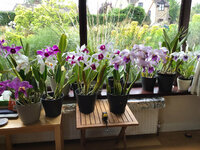 Beautiful purpurata and a stunning display indeed. Well done.
I’m a Canhamiana fan also,
mine are the pink form.
N

Such a display of floofiness!

Well, look at that! Happiness!!!

Oh my. It's hard to pick which flower to admire first, I imagine this is your daily struggle.
This is going against all the rules of orchid growing, one at a time, everyone take a turn please.

I agree, the tipo purpurata's are way ahead of the other variations, large size and such a full set of petals and dark lip. Not sure what else one would try to improve on this, maybe flower count? I guess the only thing left to do is grow it into a monster.

I am very impressed with your window growing, well done.
T

David, I have wondered for a while if 3 generations of select line breeding of a species, followed by a chemical polyploid conversion wouldn’t produce plants/flowers that rivaled many hybrids. When I look at my purpurata that has bloomed and most pictures, I don’t think I would be able to identify your plant as a purpurata! The petals are so wide and the bloom is “full”. It keeps its gorgeous lip.

Terry, I agree that it’s surprising that it’s possible to ‘improve’ these species so quickly.
It would be interesting to hear from the breeders in Brazil as to how it was done. Polyploidy and tetraploid conversion almost certainly helped.
There has certainly been a very concerted attempt at breeding this species by many people in Brazil.
The array of different colour forms of this species is quite something.
Perhaps Leslie knows more?
I am also surprised that these cattleya species will grow quite so well indoors. They just sit in the windows and are watered and fed normally. They receive no extra help as regards increased humidity or improved air movement. They seem to be quite happy with it. Maybe they would grow better in a greenhouse but I am happy with them and I get to see them everyday without having to go outside or pay extra for heating and other things.

David, your purpurata is not only 'select', It's stunning! And what a gorgeous display on your window sill - kudos for good and floriferous growing!

That is very elegant and so nice ----- the pristine white colour with the magenta.
A

Excellent David! What a lovely profusion of color and fragrance must greet you in the morning.

Here's something to think about regarding greenhouses. You also don't have to contend
with condensation from the roof splatting your flowers.

Beautiful! I’m not usually a fan of purpurata because it seems like there’s frequently a lot of tall vegetation for pretty thin, narrow flowers, but this one is spectacular! I would make room for it! Your windowsill is putting on quite the show, congratulations!

Oh my!! That's a show stopping display.
The purp is truly outstanding. I wish for one like that!

Here is a link to an article on the breeding of this species in Brazil By Carols Gomez.
It’s in Portuguese but you can copy and paste the text into a translation website for a good idea of what has gone on.

and a link to some photos of modern purpuratas

its a nice website and worth looking ground.
Last edited: Jun 8, 2021
T

David, there seems to be an absence of schusteriana and werkhauseri forms?

I guess that there are too many to have a go at breeding yourself.

have a look at this file from Carlos Gomez site

Incredible detail and complexity. Hopeless to build a complete purpurata collection, unless you are Carlos. I know terminology is a bit different because of translation, but I wasn’t quite sure where I would place a schusteriana?