Attached is a picture of two complex hybrid orchids. The orchid on the left is Paph Cahaba Terri Carroll (aquired in 2013 and bloomed in 2013 and 2014 but not since - on the right Paph Charmingly Golden x Hsinying Gold Sunrise (aquired in 2017 and bloomed in 2017, 2019 and 2020 (now). It isn't a great picture - a little two much light and I'm not sure how to resize it on this forum and yes, there is snow in Montana now. 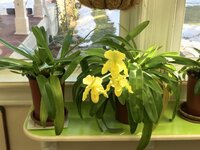 Since 2017 both have been side by side receiving the same light (east window and 4 ft under a double t5 fixture which probably doesn't add much light except in the mornings and evenings when it is dark out. They receive the same water schedule (twice weekly most of the year, once November through February) and the same fertilizer regimen. Fertilized with MSU at half strength 3 times monthly, only once a month November through February. Quantum Orchid twice a month, Kelp Max once a month as per directions. Paph Cahaba Terri Carrol grows vigorously and I divided it into four plants in 2018, kept the one in the picture and another which hasn't done much. I grow mostly paphs and phrags but do have some other orchids, for example an Angreaecum longicalear acquired in 2014 and a Dendrobium Wasselli "Gold Country, both acquired in 2014 which have never bloomed and are both on the short list for give away. So I understand that certain orchids are hard to bloom for certain individuals. But it seems like two complex hybrid paphs receiving the same care should react somewhat similarly. Any ideas what I am doing wrong?

First of all, nice big plant blooming.
Second, not all ‘similar’ plants will do the same under exact same conditions due to genetic variation and plant individuality.

You can only really compare divisions of the same plant as to vigour and flowering aspects.

I have the same issues with comparable large green complexes where one blooms and the others just grow and grow. And then switch. It is their nature lol.