Registered by Stuart Low in 1946, the cross is Rlc. Hartland x C. Ishtar, this is one of the most famous and important breeders of purple cattleyas. It's most well-known offspring is probably Rlc. Memoria Crispin Rosales which is Norman's Bay x C. Bonanza. 'Gothic' is from the original Norman's Bay swarm, and received it's AM in 1960. There are several famous clones from the original cross including 'Low' FCC/AOS and 'Lucile' FCC/AOS. Both 'Low' and 'Gothic' have been mericloned, but this is an original division from Waldor Orchids. It has the characteristic growth habit of Norman's Bay in that it's a "climber", but I find that it's pretty manageable if you plant it at the bottom of a deep pot and let the high sides contain the growths for a few years. An incredibly vigorous plant, it's one of the few that maintains multiple leads on my windowsill. Blooming this year with 3 massive flowers, that glow such a deep and bright magenta it is truly difficult to capture using my camera. I think you can see the dowiana in the background of the plant in the yellow in the lip, as well as the somewhat open nature of the tube. The tube is slightly more open this year than last year's blooming, and the petals are curling more - I think because the humidity dropped precipitously here while it was opening up this year. Still, it's incredibly fragrant and really fills my living room with a heavenly scent in the morning. 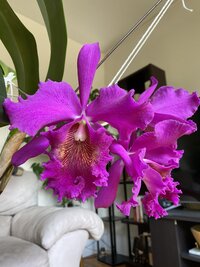 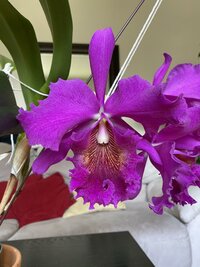 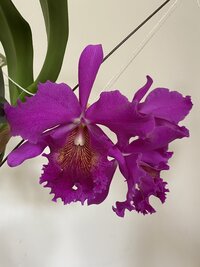 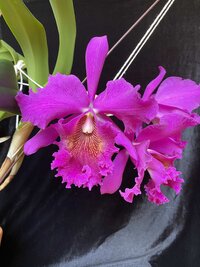 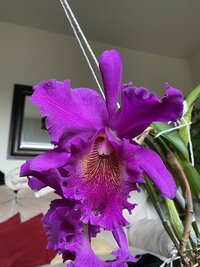 Finally, the cattleya show from my windowsill (along with C. Bob Betts 'Lines' AM/AOS): 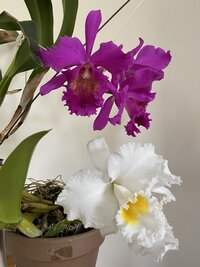 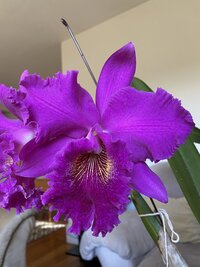 Lovely! Thanks for the information,
David
L

Yes thanks for the info. Can we see the whole plant and pot?

Linus_Cello said:
Yes thanks for the info. Can we see the whole plant and pot?
Click to expand...

Here it is. I keep all my catts in larger clay pots, even if they're planted in a plastic pot, it helps to keep them contained and from tipping over when in bloom. Sorry about the terrible staking, I was not on top of things this year. As you can see, the plant is something of a beast. I would love to be able to grow multiple individuals of this cross and bloom them side-by-side, but I simply do not have the space. As I understand, subsequent breeding with Norman's Bay attempted to improve the growth habit of the plant, while preserving the great characteristics of the line (vigor, floriferousness, large flowers, strong scent). 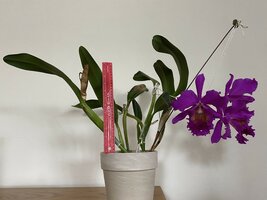 Oh no, what happened? I’m sure someone must have a spare division, or some back bulbs at least!

Petals could be fuller but again the humidity plays a role.

Like many regretful decisions over the years. It either got replaced for something 'brighter and shinyer' or got 'the rot'