the discussion on water in the crown had me thinking again about how these things grow. I haven't seen many in situ pictures, so my knowledge is pretty much nil.

I think some grow on rock under waterfalls and such, and I guess that is what they were going for in a corner of the US Botanic Garden in DC. There are a few paphs and phrags there (possibly just multiples of 2 paphs and a phrag) and they don't look all that happy. I'm not sure how long they have been there - probably at most 5 years as that's when the bg reopened after renovations.

The phrags seem to get hit by the dribbling waterfall, but the rest probably only get misting from above. (Just guessing.) And I think the non-orchids are going to win :evil:

I guess I'm posting this because I wonder how well they do grown this way in cultivation. 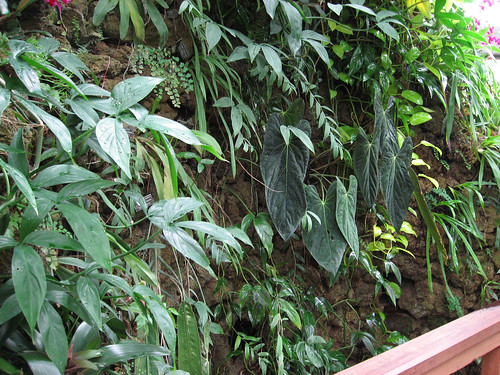 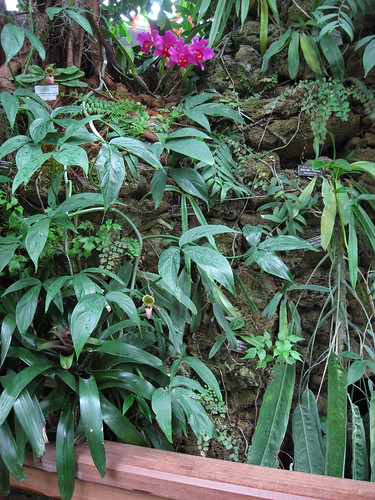 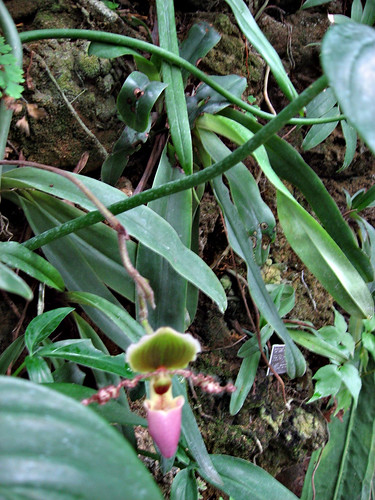 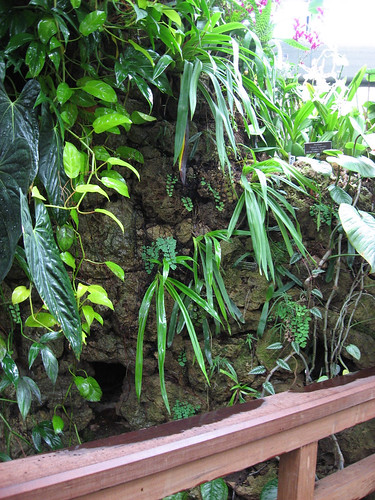 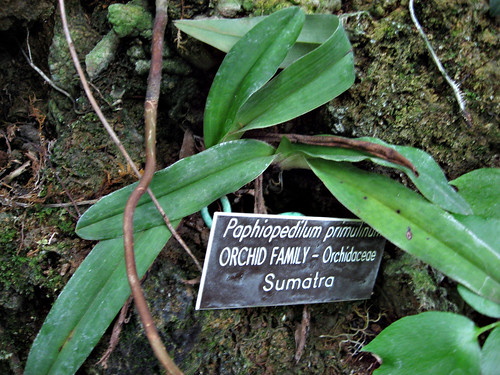 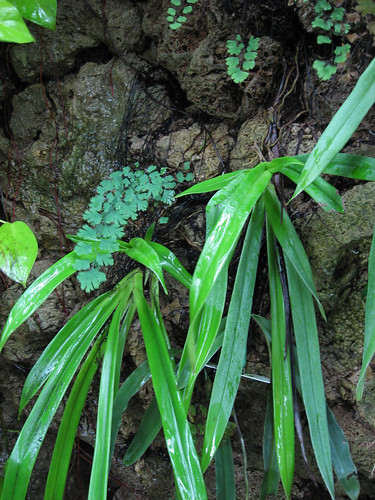 And while I'm in the vicinity, here's the (primarily) phrag corner 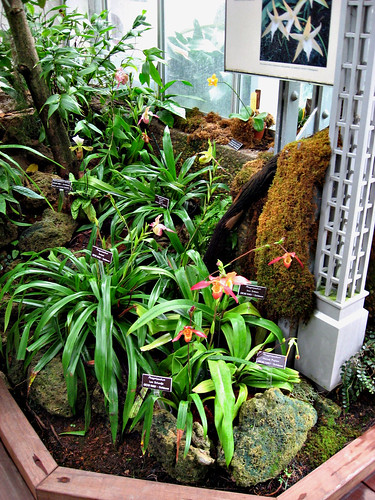 Thats a cool setup... I'm going to do the same thing one day, when I find the right place to build a permanent greenhouse.

I like the phrags, but, in my opinion, a botanic garden of this type really should focus on species; I'd much rather see caudatums and besseae and such. I think of botanic gardens like this as natural history museums for plants, and as such, I don't think that hybrids should play such a prominant role.

I totally agree. At least in the slipper arena they have a few. I don't recall seeing a single cattleya alliance or phal species, not to mention any pleuros at all..... But every time I visit, they have/I notice something new, so perhaps in time.....
G

Actually the pictures other than the phrag corner look very much like the roadsides in Peru at around 1000-2000 meters altitude, of course without the paphs. I'll post some wild habitat photos later.
M

Those Phragmipedium look very nice hanging on the rock... they look to be doing very well. Those are very nice pictures as well!

I agree with Matt, they should be specializing more into the species rather than hybrids...

I will see about getting pictures of a Phragmipedium growing on a vertical rock with constant water dribbling to it... it is in cultivation at the Marie Selby Botanical Gardens...

Anyone tried mounting Phragmipedium to mounts in cultivation? I am getting another Phrag. besseae (very stolonous), and wanted to mount it to see how it would do... any suggestions?

Someone I know grows Paphs on chunks of concrete, but I've never tried it myself. The idea is an interesting one, and I like the idea of creating a big stone wall to grow paphs and/or phrags on... but I don't have the space for it right now.

I thought that concrete was bad for plants... doesn't it have alkalines in it (like a very high pH)? I saw a post once of some Phalaenopsis growing on the side of a concrete wall, which was interesting... =)
G

I think the idea was to replicate the alkaline conditions of Paphs growing on limestone or other basic rock. I read somewhere that some Paph species (I beleive it was moquettianum) grow on a substrate that measures at a pH of over 8.5. However, with moss growing on the rock or concrete, and the roots growing out into the moss, I imagine that the pH would vary substantially.

In any case, I've never tried it myself... and I don't know how much success this particular grower has had. I understand that he painted the concrete with a yoghurt mixture to get moss growing on it first.

I think some grow on rock under waterfalls and such,
And I think the non-orchids are going to win :evil:
I guess I'm posting this because I wonder how well they do grown this way in cultivation.
Click to expand...

Your pictures of the display are beautiful and certainly look like they could be found in nature. But in nature there would be a whole lot more vegetation.

Here are some Phrag caudatum in situ pictures and some rocky ledges to give you an idea what the type habitat looks like. Caudatum of course is not a specie you would expect to find by a waterfall.

In the main orchid zone of southeastern Peru when you find a ledge in bright light it is often covered with many different species of orchids with other plants mixed in. The plants here are growing on a rock ledge that is covered with moss and organic matter. The plants are not growing on the rock, but rather in the moss on top of rock. This ledge faces directly into the wind and oncoming storms.

The plant below is growing on the exposed cliff face. Not on the cliff vertical face but rather a less vertical slope. The roots are not really attached to rock but grow in a very thin layer of moss and organic debris. No shade ever hits these plants. You can see it is windy with the petals blowing.

Here is a caudatim growing under a huge boulder in the space created where other boulders meets. No direct sun or rain ever hits this plant.

Sometimes the other plants do win out over the orchids. This is how most rock ledges are, completely covered in dense vegetation. This is why there are still new species out there undiscovered. Imagine trying to climb this slope to look for a new plant!

Real waterfalls are very wet! If you want to recreate a waterfall garden setting for orchids don't forget to add a big fan to duplicate the wind the falling water creates 24 hours a day. I did not see many orchids actually growing under or next to a waterfall but rather near seeps of water.

This smaller cascadeing waterfall has phrags growing nearby, but none in flower. Must go back to see what they are!

Very nice photos! It is great to see Phrag. in situ... I find it interesting that the healthiest looking plant of Phrag. caudatum was the one not recieving a whole lot of sun or moisture... Of course, I think a plant's health in cultivation differs from a plant's health in nature... =)

Those are great photos Lance. Inspiring

I have some experience making naturalistic rock work from my zoo days.

There is an easy recipe that adds vermiculite to quickcrete that is easy to carve on as well as being molded over frames of PVC pipe and plastic netting.

Great discussion and fabulous in situ photographs, Lance!
I love the caudatum in the boulder niche!
M

Thanks for posting those photos and your comments on each one!

It amazes me that anything (starting with moss and such) stays put in places like that. It's like Tillandsias - how they land on trees is incredible. I have seedling tillandsias but most have disappeared as a result of misting....

Funny how the phrag foliage seems completely unsuited to such locations.
G

Mahon said:
Very nice photos! It is great to see Phrag. in situ... I find it interesting that the healthiest looking plant of Phrag. caudatum was the one not recieving a whole lot of sun or moisture... Of course, I think a plant's health in cultivation differs from a plant's health in nature... =)

The most attractive or "pretty" plant is the one under the rock. But then is what we perceive as nice looking in reality the most healthy? The plant growing in shade and protected from the sun has the prettiest leaves, but I suspect the pale hard looking "uglier" one is actually more healthy.

To survive in nature a plant needs to be hard and tough. To survive in a growers collection it better be pretty or out it goes.
N

Wow. Thanx for the great photos. I dont agree about the species in the garden display, I thought most hybrids are more vibrant and more vigorous than species so that's what I would present to the layman.