There are some folks here that said they use Grodan rock wool cubes for their phrags, so I thought I'd get some to experiment with.

Grodan is a long time manufacturer of inorganic rock wool horticultural media. This product is manufactured by melting basalt and spinning it into fibers, much as insulating fiberglass is made. The fibers are produced as a mat, then cut into smaller pieces for use. In this case, they're approximately 1 cm cubes. The fiber is approximately 50/50 hydrophilic/hydrophobic, so is supposed to remain fairly airy.

I did a little experimenting:


I am planning to experiment with my phals in a mix of LECA and cubes (75/25? 50/50?). I currently grow them in straight sphagnum, because the evaporative cooling in S/H pots in my home in winter cools them too much.

I can conceive - based upon the water retention - that a blend will serve to "flatten" the moisture gradient in an S/H pot, keeping it moist to the top.

If anyone else wishes to play with it, I have a few boxes available. 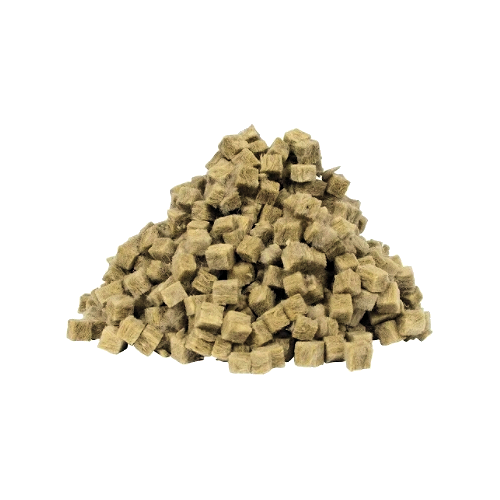 So far, I am quite encouraged. About a week ago, I potted up a plant in 50/50 LECA/Grodan mini-cubes. It is sitting next to other plants in identical S/H pots of LECA. They were last watered by me on Wednesday, and had some slight dampening by the remnants of Laura on Saturday afternoon.

All my plants are out on the deck where it is hot (we have not seen temperatures below 70F for 60 days) and very humid (usually 85% and higher).

In the <24 hours since the rain, the standard S/H pots are dry at the top surface, but the mixture is still moist.

Interesting. Thanks for sharing. It’s crazy how much they hold in water. I’ve heard/read a lot of people are using rock wool. I’m always researching different growing options so this is good information. I have just been worried about mineral buildup as I’ve heard that’s one of the down sides.

A little bit of data from my recent water-retention experiment:

I had 3 identical pots. I filled one with Grodan (1cm) mini cubes, one with a 50/50 mix of that and LECA (particles approximately the same size), and later, one with LECA.

They were weighed dry, then I ran water through them from the top, saturating them totally. I waited 15 minutes and repeated that. I waited another 30 minutes for them to drain, then that gave me the initial (t=0) weight.

As a point of reference, the dry weight of the rock wool cubes was 44g and they held 228g of water (that makes me question the weight in my original post...). The Mix weighed 142g and held 150g water, and the straight LECA weighed 272g and held 26g water. (Note: It is obvious the LECA was not saturated, as prior experiments showed that absorption to be about 20%, not closer to 10%, but I threw that test in there to see how it would fare with "traditional" culture.)

I weighed the pots at random times, ending about 1 pm Monday 10/26:

Thanks for the info. I got some of these about a year ago and what I like about them is that they don't fall apart like the previous brand I had, which disintegrated into a mush. The only issue I do have with them is that they seem to gradually become more and more resistant to re-wetting. Maybe a combination of factors at play specific to my set up is causing this, so I'd be interested if anyone else is seeing this. I'm using use a mix of pumice and rockwool cubes, with the pumice to give aeration and the rockwool cubes to hold and wick water. I suppose I need hydrophilic only rockwool cubes, which are probably the ones that fall apart ?

Here's a photo of the wetted materials:

Here is an example of a phrag growing in mini cubes. It’s been there for about a year. It’s mem. Juan Alberto arias ( eumelia arias x kovachii). Last year it flowered for the first time In late December and then produced two new growths, one of which is already in bud.
i have a range of hybrids growing in these cubes and they are all doing well or very well. I would not use anything else now. monocotman said:
I have a range of hybrids growing in these cubes and they are all doing well or very well. I would not use anything else now.
David
Click to expand...

David,
Do you have any Paphs in the rockwool cubes or just Phrags?

Ed,
I grow just two paphs and both are in rockwool. Insigne sanderae and a Helena hybrid. Both appear to be doing ok but they have not taken off in the way of the phrags,
D
T

99.9% of my plants are in Rockwool even kovachii, the 0.01% will be in Rockwool soon when they reach the day to repot LOL. Those plants in Rockwool for more than 6 months the new growths is about double size of the old growths ) I put my only rothchildianum into Rockwool and it loves it too but it’s not growing as fast as my Phrag.s

ThienNgo Le said:
99.9% of my plants are in Rockwool even kovachii, the 0.01% will be in Rockwool soon when they reach the day to repot LOL. Those plants in Rockwool for more than 6 months the new growths is about double size of the old growths ) I put my only rothchildianum into Rockwool and it loves it too but it’s not growing as fast as my Phrag.s
Click to expand...

I only have phrags in rockwool/perlite/charcoal mix. I let the mix dry on top before rewatering and they are happy. A few were In decline, almost gone from stress of temps too high and they, also, are happily coming back. Nice thing is, since mix does not break down, repot can be pot-on with very little root disturbance so they should like that. I grow in clear plastic, so only negative is algae, but that’s minor to me.

For me it is clear that it is almost the perfect substrate for phrags. The almost 50% water: 50% air seems to be the ideal proportion for good growth. On top of that the substrate is inorganic and cannot breakdown and cause the roots to rot. What’s not to like?
The only thing to sort out then is the watering and feeding schedules for each particular grower.
My seedlings are getting to flowering size a year earlier now. The difference in growth rate between rockwool and bark mixes of these smaller plants with fewer roots is huge.
Southernbelle- I use some silver foil around the pot if I want to be able to see root growth instead of algae after 6 months. I don’t bother on most plants.
Here is a better photo of yesterdays plant.
You can see the size progression of this plant with the two older growths. Ive never had growth like this with a bark mix,
David

Thanks, David. The silver foil is a good idea. I know Jeff Morris In Charlottesville who grows huge specimen phrags in 3 gal pots uses rockwool with a couple of inches of bark on top to deter algae growth. He’s the one who told me how good rockwool is because of not disturbing the roots when repotting.

I had a bit of a mental shock yesterday when thinking about my growing. Those of you who know me are aware of my preference to “go back to nature” when deciding about physical cultural parameters, as well as feeding formula, additives and overall regimen, but it occurred to me that all of my plants are in “unnatural” inorganic media! Literally everything is in LECA, rock wool, or a mix.

Of course, I AM a ceramic engineer, so everything being in glass or clay fits!
P

very interesting, may what types of fertilizers advise you, and how often

David, I can't find that you have said what your fertigation frequency is for various size pots?

All pots sit in larger trays of water and I tend to water the individual pots when the trays dry out. So it could be a every couple of weeks in winter or less than a week in summer. I almost never flush through, maybe the odd time in summer when it’s been hot. It’s a pretty lazy system, a bit hit and miss but works for me.
David

monocotman said:
All pots sit in larger trays of water and I tend to water the individual pots when the trays dry out. So it could be a every couple of weeks in winter or less than a week in summer. I almost never flush through, maybe the odd time in summer when it’s been hot. It’s a pretty lazy system, a bit hit and miss but works for me.
David
Click to expand...

Grodan rock wool cubes will hold salts. I see them visibly accumulate on the surface cubes. I use MSU at ½ the recommended rate, as phrags are watered about twice a week, so I flush well with pure water once a month.
You must log in or register to reply here.
Share:
Facebook Twitter Reddit Pinterest Tumblr WhatsApp Email Link