A bit of a story to the very late blooming of this clone.
This species is supposed to like slightly lower light levels than many but I found last year that this plant enjoys full south facing sun. It grow three leads and flowered off two.
This season, just the main lead started to push out a new growth at the normal time, late autumn. However it died as did the second, later growth it produced. Both died off when quite small after sunny weather. Although the plant likes sunny weather, the new growth seems to be much more susceptible. I then remembered that the previous years successful new growth had started its development facing away from the window. So after these two failures, the plant had a rest and then the two other growths from last year produced leads and these are the flowers. 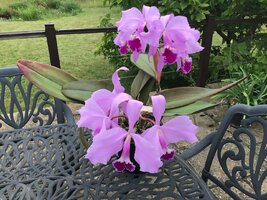 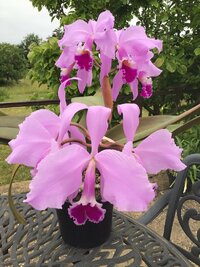 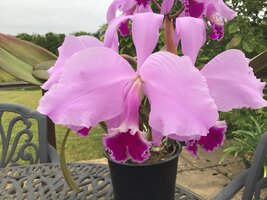 anyway, happy with the eight flowers, although they are slightly smaller than last years.
David

David, these are great flowers.

And very informative post - I 've made a note regarding culture!
T

David, I have been wanting to ask you about the temperatures you achieve throughout the year in the leaf zone on your windowsills? Have you measured minimum and maximum for the different seasons?

Terry, I am never that meticulous. The best that I can do is to observe the plants and make adjustments based on that. The nights go down to seventeen or eighteen as a guess but I’ve never measured it. Days are twenty two without the sun and in the sun much higher.

Incredible display, hard to believe it grows on a windowsill!
C

Beautiful David, I was always fond of this species do to it's downward pointing lip.

Lovely flowers with floppy dorsals. Who cares? The flowers are beautiful anyway.