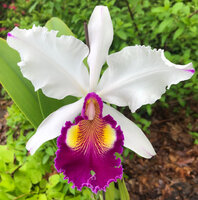 Cattleya dowiana was first publicly identified in Europe in the 1850s as a Costa Rican plant. There was controversy for decades concerning a very similar Colombian orchid named Cattleya aurea that had been registered with RHS in 1883 but it was finally decided that aurea was a separate variety of Cattleya dowiana and not a separate species. However, hybrids with dowiana var. aurea retain, and continue to get, separate hybrid names compared to hybrids made with non-aurea dowiana.

The cross (dowiana x warscewiczii), which can be natural or man-made, was registered as Hardyana by Cookson in 1896. The cross of (dowiana var. aurea x warscewiczii) was registered in 1902 by O. Doin as Semontiana. Since the yellow color of dowiana var. aurea is recessive when combined with warscewiczii (and most large petal Cattleyas except rex), the petal/sepal color of either Hardyana or Semontiana reflects the warscewiczii parent. Only two pale-yellow Hardyanas are noted as exceptions by Chadwicks in the new version of their book “The Classic Cattleyas”.

Hardyana has been better known than Semontiana and it is even possible that some Hardyanas were made with dowiana var. aurea and not called Semontiana. Orchids Limited remade Semontiana using the famous semi-alba warscewiczii ‘Frau Melanie Beyrodt’ and an excellent dowiana var. aurea ‘Mystery’ and these began blooming in the last year or two. I hadn’t been optimistic that mine would bloom this year, but the new lead did push out a single flower. The sepal/petal coloration is dominated by the semi-alba ‘FMB’ as the yellow of dowiana var. aurea did not come through. The lip seems to be a combination of warscewiczii and dowiana.

There is a little purple flair at the ends of the sepals and petals that may come from the dowiana because the pictures of warscewiczii ‘Frau Melanie Beyrodt’ show pure white sepals and petals. I have no idea whether this terminal flair is unusual or adds or subtracts to the attractiveness of the flower.

I don’t think most Semontianas could be distinguished from Hardyana because the recessive yellow of the aurea sepals and petals doesn’t come through. The substance of my flower is only modest, but the flower should last longer than a dowiana. The fragrance is fairly strong and very pleasant. It is not at all like the fragrance of the Trumphans I have blooming at the same time. Since Bill Green reasoned that Triumphans fragrance must be mostly dowiana (with rex having light fragrance) I would reason that my Semontiana fragrance is dominated by the warscewiczii. I haven’t seen much written about the dominant or recessive tendencies of Cattleya species fragrance.

That is really nice and a good blooming on a large plant would be a show stopper Whatever it is called!
David
T

So do I. They’re my favourite form,
David

Good first bloom. Potential in 2-3 years when plant is stronger and pushing 3-5 flowers out.

The mini flares or pincelada is a trait in many semi albas including FMB. You can see them in other semi alba warsc lines and hybrids.
T

DrLeslieEe said:
Good first bloom. Potential in 2-3 years when plant is stronger and pushing 3-5 flowers out.

The mini flares or pincelada is a trait in many semi albas including FMB. You can see them in other semi alba warsc lines and hybrids.
Click to expand...

Thanks, Leslie. Not a plus or a minus? You realize a little voice immediately says, "I hope I stay healthy enough to see it in 2-3 years"!

terryros said:
Thanks, Leslie. Not a plus or a minus? You realize a little voice immediately says, "I hope I stay healthy enough to see it in 2-3 years"!
Click to expand...