So another day, another catt. I promise it will stop soon.
This was bought from the Fischer’s at the same time as yesterday’s mossiae semi alba. I’ve had it about three years and this is by far the best blooming although after last year’s worries about culture and rot, the plant was repotted last autumn, not the ideal time.
It’s an unselected seedling that maybe from their own breeding and has a natural spread of 16cm. The lovely lueddemanniana scent is just starting to kick in.
So far it has proved to be a good grower and has three leads although after the repotting two have decided to root rather than throw a growth this spring. They should shoot later this summer, so maybe next spring we will see multiple blooms from several growths. 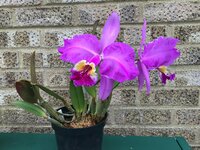 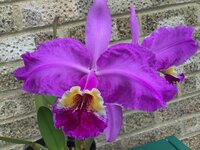 monocotman said:
So another day, another catt. I promise it will stop soon.
Click to expand...

No need for that for our sake...they have been such a joy to follow! Of course, I suppose, the reservoir of supply must dry out at some point, though... but that would in my eyes be the only reason!

I would count myself a happy guy, if any of my lueddemanianas turn out as good as this gorgeous fella'!

Absolutely beautiful, no complaints from me, keep them coming! Do you know if this is from their ‘Big Pink’ x ‘Dark Pink’ cross? I have one of those seedlings, but am still waiting for a first bloom, fingers crossed it’s half as good as this!

I don’t think so. This was definitely marketed as ‘dark form’ three years or so ago with no mention of the parents.
David
Last edited: May 20, 2021

Beautiful and no need to stop.(if need be buy more). Looking at your flowers every morning sure beats reading the newspaper!
T

They have created some very nice lueddemannianas. I am waiting on another of their rubra crosses, ('Canaima's Panita' x 'Macaray' AM/AOS) which is supposed to be very nice. Should bloom next year and I will be thrilled if it is as nice as yours appears to be.