This thread has been prompted by a chat with fellow slippertalk member William Green. More on that later.
Cattleya dowiana has a reputation for being a finicky grower and succumbs readily to rot if watered during its resting phase.
However, if you get the conditions right, Chadwick tells us that it is a vigorous species.
This is the story of my plant so far.
It arrived in November 2020 as a South American import via Germany and looked dehydrated and without many good roots. Sort of normal for this process. It’s the plant on the left of this photo. 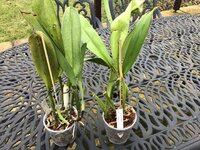 Anyway it had started to grow so it was treated gently and watered sparingly until the new growths were a bit bigger. By May the plant had made up these new bulbs and was rooting. Things seemed to be progressing well. See second photo. 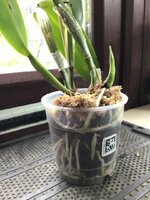 The plant had rehydrated with the production of the new roots and the leaves were looking much better. Anyway the plant then decided to go into another phase of growth without pause. The new roots continued to grow and grow to such an extent as the new growth was developing that it was given a repot. I’ve not seen another species or even hybrid produce this much root growth.
Now we are just at beginning of the third growth. Two eyes are swelling and all appears well. 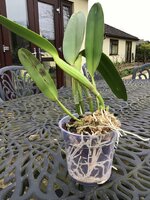 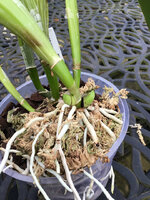 Three species of cattleyas grow quite close to each other in Colombia. These are rex, dowiana and warscewiczii. Both rex and dowiana have the same reputation for finicky growth.
William Green found that his rex seedlings started to grow before the start of the wetter summer season. He has a really interesting video about it on his YouTube channel ‘My green pets’. He is not going to start to water them well until the new growths are quite large.
Checking the climate data for dowiana, although this plant is starting to grow, in the wild February is part of the dry winter period with little rain and even March has only a modest increase. It’s not until April that the wet summer really starts.
So maybe I should do the same for mine, although the plant may still be adjusting to northern hemisphere time.
Its also possible that both species normally start their new growths before any appreciable rain. The reason that they are thought of as being rot prone Is too much early water when the new shoots are young. Chadwick already recommends not starting to water warscewiczii until the new shoots are four inches (10cm) tall.
So maybe these three species, that all grow in a similar area, all benefit from this delay in watering. Time will tell! William will find out this season about rex. I will probably delay watering my dowiana well until the new growths are well underway. I will watch the older bulbs and look for any stress.
The climate data also showed that the minimum temperatures that these species received was about 20c with a max of 30c year round. No drops in winter. This could also be a reason for rot. I don’t know many people that run a greenhouse with a minimum of 20c. However for us indoor growers, it’s much easier. Getting the temperature to drop can be the issue. So maybe these species are easier indoors. Time will tell.
Fingers crossed!
David
Last edited: Feb 19, 2022

David, I read your thread with much interest....because since last summer I've owned a young plant of C. dowiana var. aurea. Good luck and fingers crossed to both of us indoor growers.

Guru, Keep it warm! Good luck. William has some dowiana seedlings looking good in his video. Worth a look.

David, your dowiana's roots are nothing short of beastly!!! WOW!! I can say a couple of my rosita seedlings are growing vigorously and putting roots out everywhere, very impressed with this species!

This dry treatment brings to mind the Catasetinae and how leading breeder Fred Clarke recommends not watering the new growth until roots are 'well established' meaning reaching deeply into the pot, even beginning to circle around in the bottom.

As for rex, the experiment is testing the hypothesis that by imitating the average temperatures and monthly rainfall in Moyobamba, the plants will adopt a habit similar to what they would exhibit in the wild. Unfortunately the only first-hand account of their habitat is the November 1942 article by Blossfeld in the AOS Bulletin. There's probably more out there, I just haven't dug very deep. (Leads on related info would be enthusiastically pursued and much appreciated!)

It is looking like they are doing that this year. Blossfeld mentions arriving in the habitat towards the end of the dry season (August in Peru) only to find the plants in full growth, and had to wait a month until the bulbs were more or less completed so that he could collect. He says in the wild they bloom shortly after the dry season, which is what I'm seeing in the tent. In March the 4-month period of miniscule amounts of fertilizer and reduced water will end. I will start feeding at around 25 ppm N with every watering, and they should be blooming by April. Most accounts describe this plant as a mid-to-late-summer bloomer in the Northern Hemisphere.

What I'm most interested to see is if very low levels of fertilizer and fewer waterings during the full 4-month dry season will improve flower counts.

I find it so interesting that this species appears to makes most of its new growth during the dry season! It seems to be counter intuitive! It’s as if the plants need as early a start as possible for the wet season when they finish growing, flower, hopefully fruit and then root.

An update.
The two new growths have done very well and both have just pushed out a sheath. I did wait to start summer watering until they were both a couple of inches high. The plant seemed fine and not under any stress up to that point.
The good news is that the growth on the right has buds! I can see two or three. It‘s a week too early to tell about about the one on the right But I am expecting some.
This plant is more vigorous than any hybrid I’ve grown! 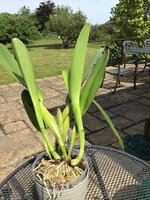 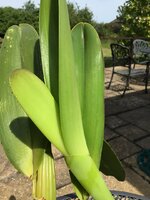 It’s amazing the turn round that it’s made since November 2020 when it arrived with few roots and looking dehydrated.

Fantastic, David!!! I can t wait its flower.One of my favourite cattleya. Unfortunately it blooms only two weeks, but its beauty and fragrance are something unbelivable....

Thanks and fingers crossed Dodidoki! Never flowered one before.

David, nice to see the recovery and improvement of these plants and fingers crossed to see in some weeks time pretty flowers.
T

I have flowered two of my warscewiczii but my dowiana hasn’t bloomed yet. It’s new growth is about half done. I really appreciate this group that forces the buds up the sheath while the growth is maturing (this includes lueddemanniana). You don’t have to sit and watch a sheath (dry sheath) for months wondering if it is going to bloom. This year my lavender warscewiczii pushed buds right away but my alba did not, so I know those growths are done for this year. I think the issue of keeping the growths light on water and nutrition during their early growth is interesting and maybe important. I am going to be more careful about that this next year.

Its the same growth pattern as William’s rex plants. I’m just amazed at its vigour.

My withholding water and fertilizer from the rexes during their dry season resulted in fewer flowers this spring. Maybe next time I will not reduce concentration of fertilizer, just frequency of irrigation.
Last edited: May 19, 2022
B

The second growth has buds in the sheath!
Does anyone know how quickly they develop?
are they super fast like purpurata?

William, that may be the way to go. In the wild when there is less precipitation then the feed value of any rain falling won’t go down, in fact it may go up!
T

David, I have inferred from my reading that these Cattleyas that experience a period of less rain still receive frequent moisture in the form of fog/dew that keeps the plant hydrated. However, there is likely little nutrition with this moisture. It is rain that carries nutrients as it runs through the surrounding environment to get to plant roots. So, I have thought that a modest reduction in watering may be acceptable, but reducing the nutrition for the period of time may be more important. How did you handle watering and feeding in the December to February period of time?

winter watering is usually every two to three weeks, but it depends on the weight of the pot. I lift every pot in winter and feel the weight before deciding on whether or not to water. They have to be really quite light before I add any. If there is any doubt, I wait another week. I also half the feed rate compared to summer so it’s quite light even when I water. But there is always a bit of feed in every watering.
T

I have the one dowiana and a couple of warscewiczii clones. They all get summer watering in this manner. Other species get their summer watering earlier in the growth cycle.

Not Cattleya dowiana in bloom