A happy Christmas to one and all!
This plant was sourced from eBay in the uk so the provenance isn’t great but the flower looks about right judging by photos on the web.
The sepals and petals are mainly an ice white but there are bits of coerulea veining starting to show on the sepals.
I’ve had it about three years and this is the first time it’s produced a decent bloom. Last years was so poor I didn’t even photograph it.
Searching the web for more information on the clone I found this from Tropical orchid farm:-
‘Any jenmanii var. coerulea in existence is an offspring of a single plant found in nature in the early 1980's, by Dr. Icilio Crisci - C. jenmanii var. coerulea 'Cruzana' CBM/SOEM. Beautiful form and nice ice "blue" color.’
The scent is just starting to kick in.
Although you cannot tell from the photo, the dorsal is being held in an erect position by a clothes peg. They are just about right for clipping round the base of the bloom and holding up a recumbent dorsal. It makes for a better image. If you leave it in place for a few days it’s possible to train the dorsal to stay more erect. 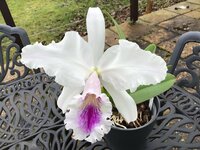 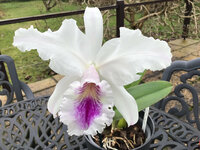 Thanks for the tip on another orthodontic/prosthetic device for the tool box! I have another species Cattleya that is supposed to be coerulea, but the coloration of the petals and sepals is so subtle I wonder when you have to shift over to just calling it semialba.

monocotman said:
A happy Christmas to one and all!....-
Click to expand...

Same to you, David.


monocotman said:
The sepals and petals are mainly an ice white but there are bits of coerulea veining starting to show on the sepals.......
Click to expand...

In my eyes it's a lovely flower, but to me it looks almost semi-alba like than coerulea like. Anyway the very faint coerulea veining on the petals shows the way it should be.

But if you start a quest in the net.....you will find a lot of photos which show 'true' coeruleas so I'm wondering if this statement is true ?
L

Whatever It is, it's a great flower!

Guru,
agreed, it’s a pale flower but there is faint colour in the petals and sepals and the lip colour is correct for a coerulea. The petals are an ice white, not pure white. They may colour up more in the coming days. It’s only been open for about four days. So to me the plant is a pale coerulea.
Clearly the breeding effort has been to improve the coerulea colour in succeeding generations if indeed it was the original plant.

Another great beauty from you, David!!!

Very nice, please keep us updated if there are any further color changes!

Coerulea is define as a grey tone to the lavender hue. The lavender and red tones are subdued by this gray overcast. It’s like mixing a light grey into the red, giving it a greyish purple.

The pics you posted here does not show this grey tone on the lip. Perhaps the bright light confused the camera.

And to clarify, a coerulea can have either white sepal and petals, or a greyish blue tone to them.

Sometimes, a genetically heterozygous phenotypic coerulea can produce non-coerulea offsprings when selfed. It is how we can test the purity of the genes.

The taxonomic deliberations apart, it's a wonderful flower!

A Merry Christmas and A Happy and Floriferous New Year to you, David, and to all!

So I am a bit confused Leslie, are you saying that is may not a a true coerulea?
I‘ve just take a couple more photos just now to show the difference between this and the true alba of Bob Betts ‘white lightning’.
Cruzana seems to be developing some veined ‘venosa’ pattern on the petals and sepals as the flower ages.
I was trying to show the difference in the white on Bob Betts to the icy grey white of Cruzana but it doesn’t show up too well using the iPad camera.
Its clearer to see indoors in lower light. 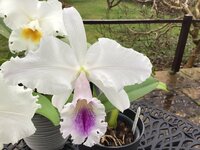 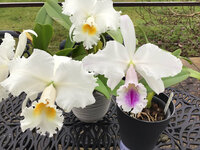 If one sees the photo enhanced, and compares the colour of the dorsal with the colour of the Bob Betts immediately behind, then one quite clearly can detect the blue-greyish hue of the jenmanii - and the veins also, by the way!
So I vote for the proposition, that yours - and the tag's - identification is a valid one! (which is further stressed by your description of the colour in indoor, lower light)

It is hard to determine if it’s true coerulea based on the pics and the pink lavender in some portions of the lip striations. But as it stands, until seen by an expert eye in real life, it is by all means a coerulea at this time based on provenance.

Leslie, I think that you may be correct. There may be a bit too much of a purple colour in the lip for it to be a true coerulea. It could be a seedling from cruzana x self or something similar. I remember Mick Fournier talking about seedlings from a selfing of another plant where most ‘weren’t quite true coerulea’.
T

Thanks, Leslie. I did not know the emphasis was on the labellum color! I have been focusing too much on the petals and sepals. I also didn’t know that with the right colored labellum you could have a coerulea with fully white petals and sepals. A big orchid learning for me today.
N

I also think the lighting and photo aren't expressing what can be seen with the eye, in person. Road trip!!
Thanks for sharing.

We are eagerly awaiting an invitation, David, when the travel restrictions due to the pandemic are loosened, that is!

Well a week further on and the bloom has developed on and is now officially a ‘venosa’. Check out the photo. It may not be a true coerulea but it’s still an interesting thing. The scent is not strong but is very sweet. 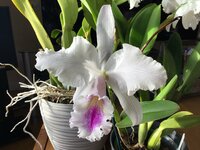