I'm very interested in Chinese deciduous Phalaenopsis (subgenus Aphyllae) and Parishianae, but it's been a bit tough to figure out how to grow them. Here is a previous thread where I asked for some help. I've had this P. wilsonii for about 3 years (and it was already mature plant). First winter, I kept it too warm, above 65F (and maybe too much water). Second winter, I went to the opposite; kept it at 7C (45F) for 2 months with watering once every 5-7 days, and short day light (9-10hours). I had a high hope, but it didn't. This winter, I didn't pay much attention; I kept it at 18C (65F) max 10-13C (50-53F) min and watered every day with 12hour light. Finally a success! I know that it is not a super difficult species, but I'm still pretty excited about this. But P. malipoensis in the previous thread hasn't flowered yet, it makes flower shoot(s) every year, but it is at a weird time of the year, and the flower buds don't appear. 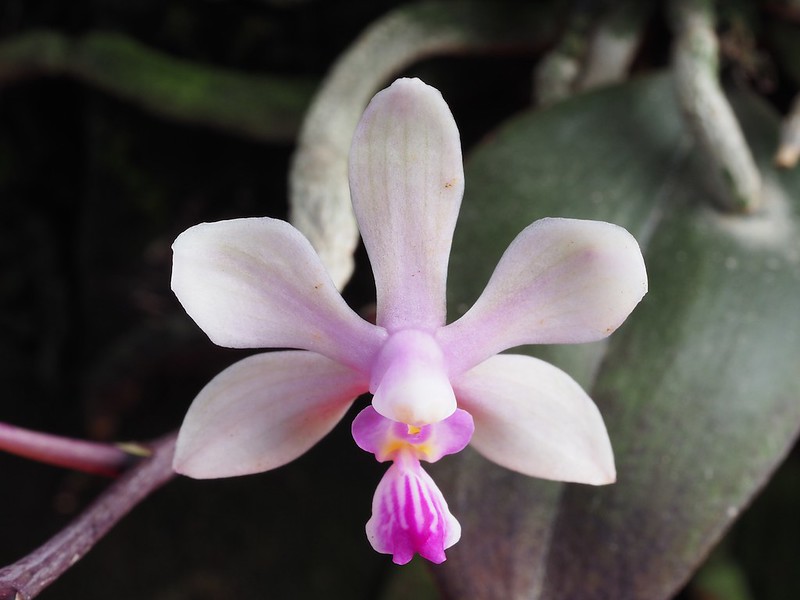 Notice the short, nipple-like spur, bottom side of the lip, opposite from the side-lobes of the lip, just below "hinge" of the lip. It is a bit difficult to see in the next photo because the spur in the shadow. It is right side of the yellowish area of the lip.

Taxonomy of subgenus Aphyllae is pretty confusing (more details below). This short spur is supposed to be one of the distinguishing character of this species from P. taenialis (=P. braceana) according to the Stig Dalstrom's articles:
Dalstrom, S. Phalaenopsis taenialis. Orchids. August 2010: p. 468-471
Dalstrom, S. and P. Ormerod, Green Phalaenopsis Orchids. December 2010: p. 706-709 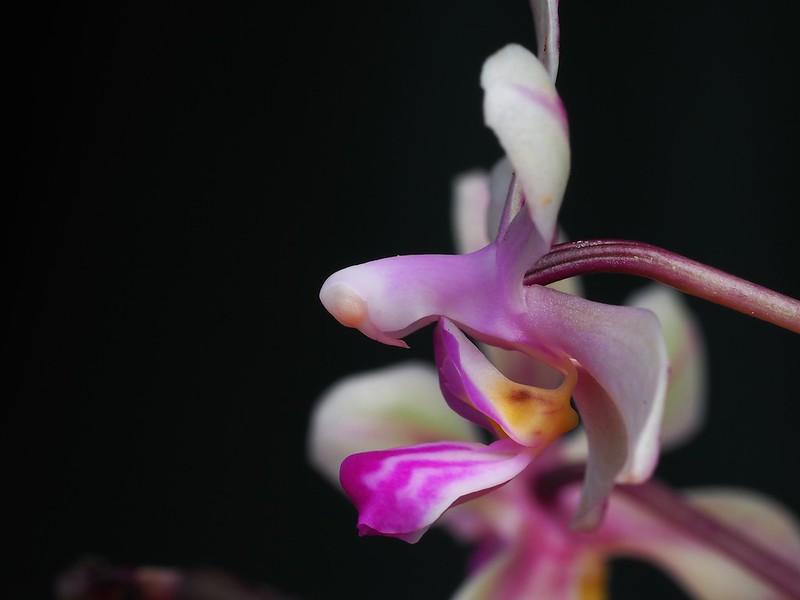 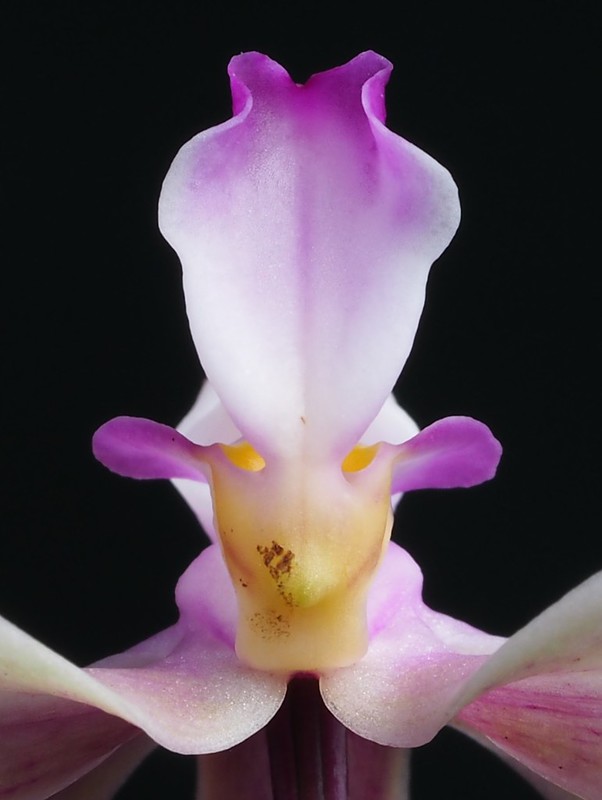 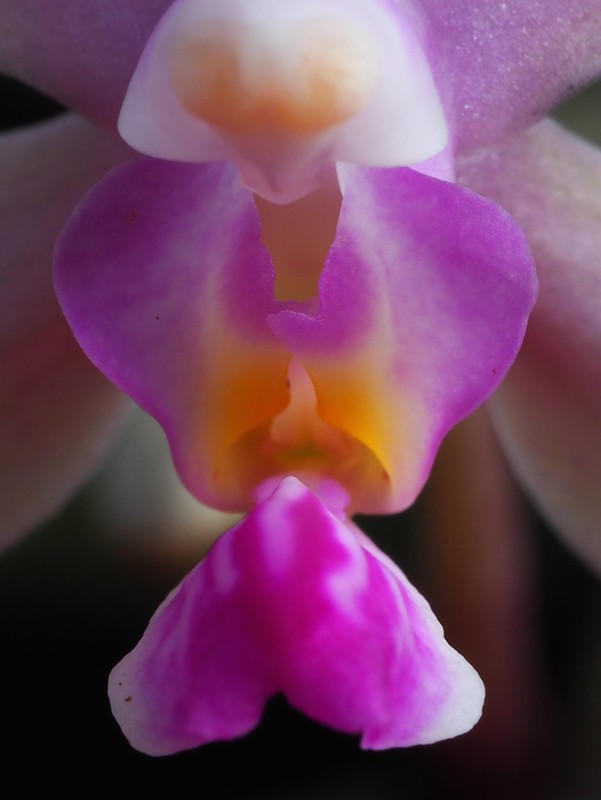 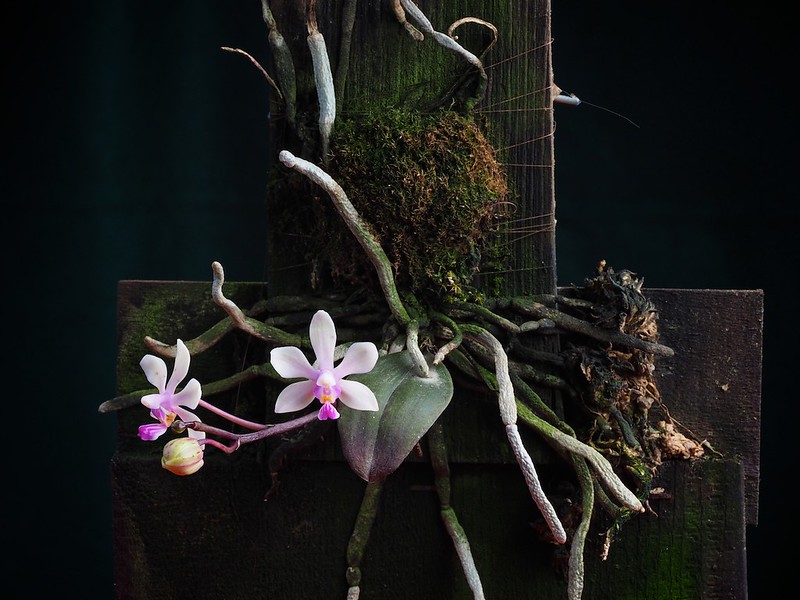 Flower color changes to greenish/broze color after the flowers were pollinated. 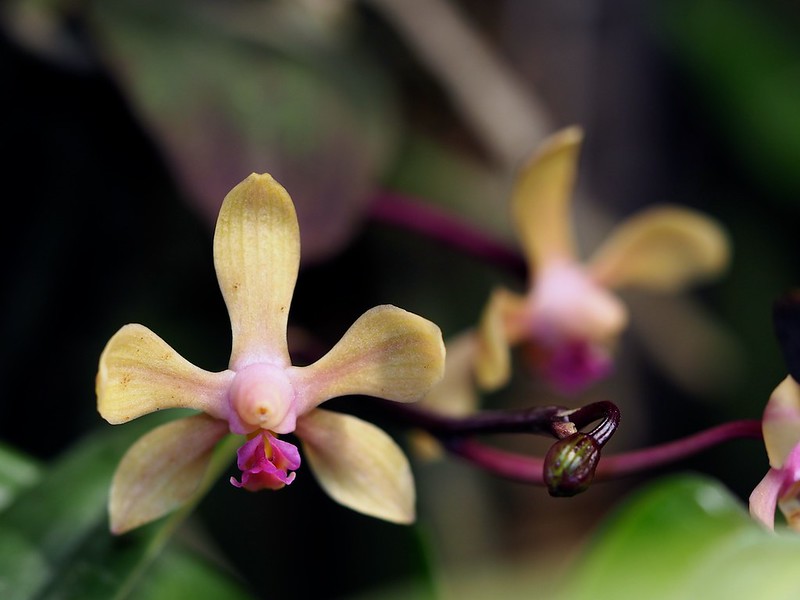 This is from 2 years ago:

According to Dalstrom, the treatment of this group by Christenson's book is not quite right. So there should be 5 species in subgenus Aphyllae. Here is my understanding from Dalstrom's articles.

-- flowers are distinct from the rest
* P. natmataungensis
- dark brownish stripes and marking on the sepals and petals, not confusing.
- From N. Myanmar, in 2003, described in 2010.
N

Such a massive post and that's what you keyed into:arrr:

Yes, it is informative. I sometimes have trouble with
the cooler growing mini Phals. in winter with max low of
60F. Some of them drop leaves in winter and then begin
to grow again in spring. Do you fertilize as you normally
do during the winter? BTW, it's a lovely bloom.

*The "nipple" looks like a landing pad to me.
L

Well done! This is a fine and interesting species.

Nice post naoki. I only have braceana in the group. (have parishii and lowii which I treat the same though)

I feed these at half the rate of the shilleriana types. (higher the habitat elevation the lower the fert concentration)
But I think it is really important not to feed at all if the root tips have sealed off.
So far mine are doing well with about 15C min.

Great post; wish I could be more help, but this whole section has never really thrived for me. I grow them too cold in winter, too dry in summer, and the crustaceans are pretty hard on them.

I am still essentially using Christensen to sort them out; agree that is problematic. Species in this section I do best with came labeled stobartiana, but seemed to fit Christensen's concept of braceana. Maybe by Dalstrom it fits stobartiana. 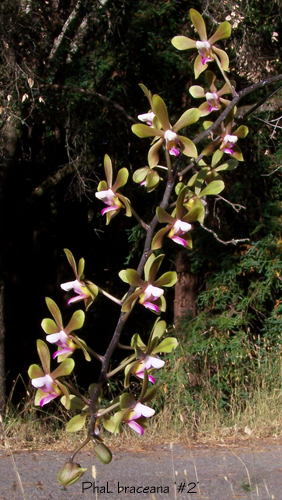 My plants get down to just above freezing during the winter, when they also run to the dry side and experience bright light. During the summer daytime highs sometimes reach 100F, the plants are kept wetter and under more shade. I don't feed much. Whole section will go deciduous for me when grown this way, but kept their leaves when grown warmer (60F.) My "braceana" do best at about 50F nighttime minimum.

Also have parishii, lobbii, which refuse to die. All the wilsonii primaries expired from this cultural regimen. LOL

Great photos Naoki. I was in areas in Sichuan where this species was reported to grow, but never saw any. I'd like to try one outside here some day, though the winters might be just a little too cold.
N

Angela, I probably shouldn't fertilize in the winter. But I was lazy, and I treated it in the same way as the other cool growers in the enclosure (so I fertilized it with 30ppmN).

That P. braceana is gorgeous, Robert! Thank you very much for sharing how you grow them!

Tom, I think that it might do well in Fukuoka. Here is some climatic info, and in Jan, it could hit < 0C. Summer in Fukuoka is a bit hotter, though. http://bernard.lagrelle.pagesperso-orange.fr/Wilsonii/anglais/Phalaenopsis wilsonii anglais.htm

I think Dr. Ikedo, who used to run phal species web site, ranwild.org, has some in Japan.

naoki said:
Tom, I think that it might do well in Fukuoka. Here is some climatic info, and in Jan, it could hit < 0C. Summer in Fukuoka is a bit hotter, though. http://bernard.lagrelle.pagesperso-orange.fr/Wilsonii/anglais/Phalaenopsis wilsonii anglais.htm

I think Dr. Ikedo, who used to run phal species web site, ranwild.org, has some in Japan.
Click to expand...

Thanks Naoki. I don't doubt it gets hotter here since our monsoon kicks off in mid July and that region stays cloudy and wet all summer. Neat species.