Feel free to discuss what you think should be included in a "welcome to the wonderful world of growing Paphs!" culture sheet.

If you have any good photos you'd like to submit, link or post them in this thread as well.

Where I really need help is when it comes to differences between growing maudiae types, brachy/parvis, and multis. Multis I know, but what we typically see at our show is more of the maudiaes and the complex, which I don't know a whole lot about growing.

I think if we could come up with a sentence about how each group differs in their culture, it would be an excellent thing to include.

Okay, I need to get these done today.

Can you guys help me with the parvis, brachys, and complex hybrids?
I could really use a succinct sentence about how their culture differs from other paphs.

Maudiaes grow like weeds and so do complexes. Complexes are supposed to get lower temps, higher light than Maudiaes. They are the paphs you can't kill, they are very versatile. Maudiae grow in low light, about 1000fc at peak times or 300-400fc under lights. They are the beginner paphs.

Parvi's need more light than maudiaes/other mottle leaved. Some need a winter rest such as armeniacum and micranthum or they will expire after a few years. This cool temp drop helps initiate bud formation.

Brachy's can take the same light as maudiae. They are sensitive to salts

Multis are warm growers and they need high light. Around 2000fc?

oke: You're a genius Heather

Well, no, definitely not. That's why I need some help!

I didn't work on these at all today. Must crack down tomorrow. Sigh...I overcommit too often.

That's what it is in theory I believe. I've honestly never paid any attention to it in practice though.

Jon in SW Ohio said:
That's what it is in theory I believe. I've honestly never paid any attention to it in practice though.

Yes...I think we all grow them about the same unless we have huge facilities to provide all those different ideal growing requirements.

It is about time I contribute as I said I would.

I think it should be noted the easiness of culture of a novelty compared to a primary, and then species. Air movement is vital more than light I think. Humidity is always an issue in a home environemnt during the winter months excpet down in S. FLA. My humidity outside of my little grow dome is a dismal 45%. I have really noticed alot of the PB older growths dropping faster than if they had higher humidity. I think the use of humidity trays for beginners is a must. I will see if I can find some old photos for ya. 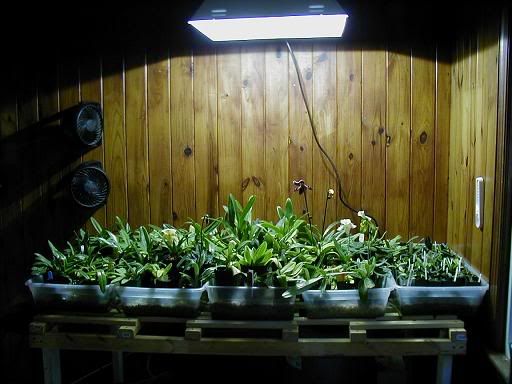 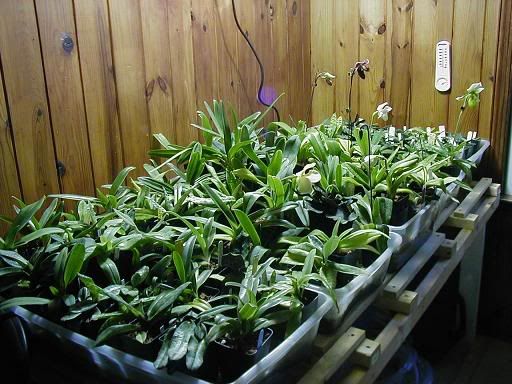 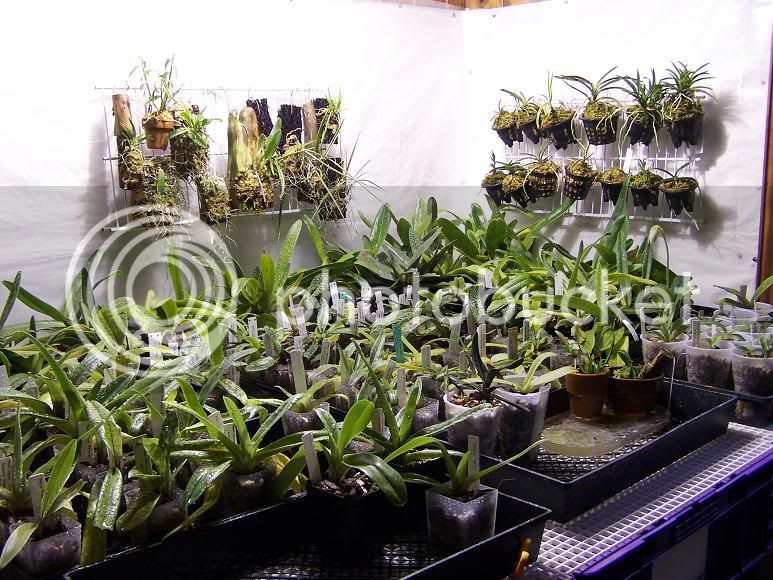 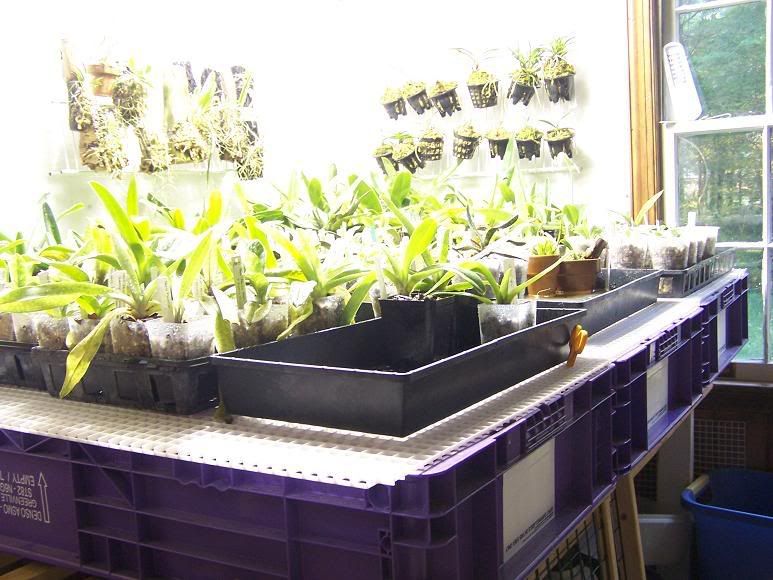 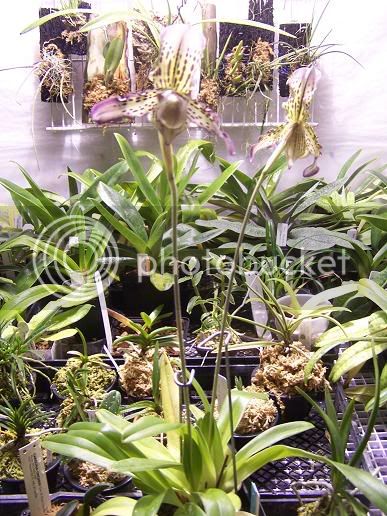 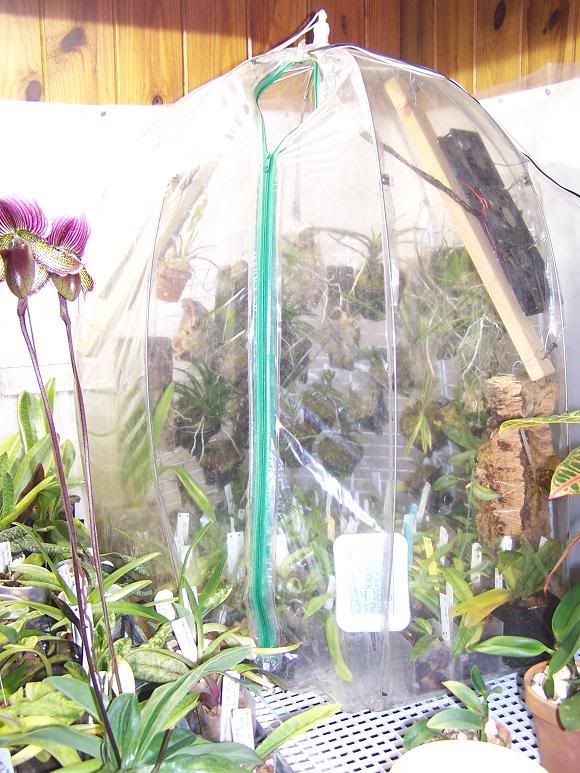 Here are some earlier pictures of my first attempt at lights. 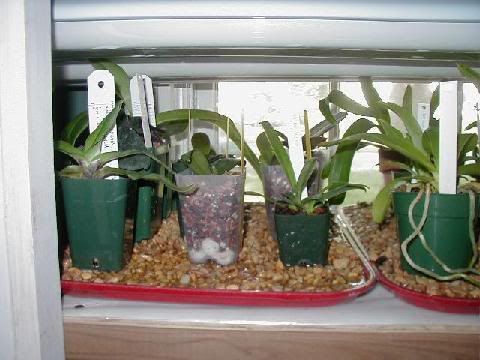 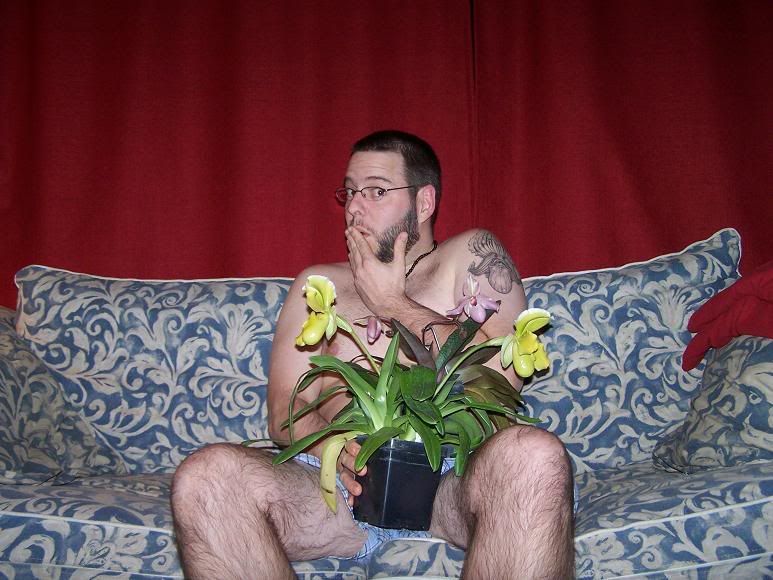 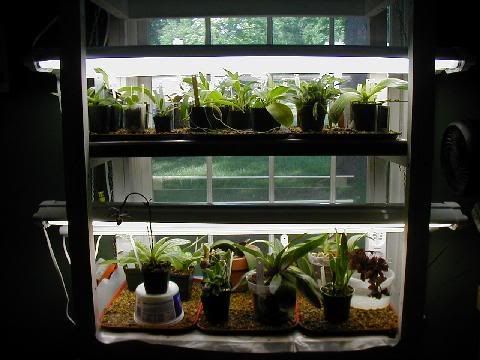 Tadd, I think you want me to use that photo of you on the culture sheet, don't you?

For those still getting used to slipper nomenclature, perhaps a brief definition / examples of species / hybrids such as parvi's, multi's, complexes, etc.

Okay...Here's my first draft. Feel free to comment and correct!

Paphiopedilum (paff-ee-oh-PED-ih-lum) are the old world tropical lady slipper orchids with species coming from a huge geographic area including India and China through Indonesia and the Philippines to New Guinea. Species are semi-terrestrial, growing in humus and other material on the forest floor or on limestone cliffs, and occasionally on trees. Plants will generally flower from every mature growth, and flowers usually last from one to three months. There are multi-flowered, sequential flowered, and single flowered varieties. They are easy to grow in the home, under lights, or in a greenhouse.

Light
Paphs are good beginner orchids because they can be grown successfully on a windowsill. An east or south facing window is ideal. Paphs also do well under artificial lights. Run them seasonally, 11 hours in winter and 14-16 hours during the summer. The multifloral, strap-leaved species and hybrids can take strong light up to 2500 foot-candles. Maudiae and other mottled leaf Paphs prefer a bit less, around 1000-1500FC. If your mature plant is having trouble blooming, it is likely not getting enough light. A good indication of too much light, however, can be felt by touching the leaves. If they are hot to the touch, they are getting too much light and are at risk for burning.

Water
A good rule for Paphs is to always keep plants moist, never soggy, and never dry. Generally water once or twice a week depending upon the season. Use rainwater, distilled or reverse osmosis water, or tap water. Always water in the morning to ensure that the foliage will be dry by the evening and do not let water accumulate in the crown of the plant.

Humidity and Air Movement
Paphs prefer a humid environment. Between 50-70% is ideal. You can achieve this in the home by using humidity trays and by purchasing a home humidifier. Be sure not to set the pots directly in water, but above, either on a grid that fits inside the tray or on a bed of rocks or gravel. Air movement is also essential year round. A small fan near your growing area will help to keep air flowing and discourage rot or fungus from settling in.

Fertilizing
Recent research by Michigan State University has revealed that orchids generally need much less phosphorus to bloom than was initially thought. Since water quality is so important to the way plants utilize nutrients, they have developed two formulas—one for mineral-rich, or hard, water such as most well water (19-4-23), and a second for relatively pure water (13-3-15). Paphs do very well with MSU fertilizers, which are generally used at 1 tsp. per gallon of water once a week. Flush with clear water once a month to leach out any accumulated salts, which can burn the roots.

Potting
Repotting should be done generally every two years or before the growing media decomposes. Seedlings and smaller plants are often repotted every year. Paphs tend to do well in a variety of growing media, including combinations of fine fir bark, coconut husk chips, diatomite, and even semi-hydroponic inorganic media such as hyrdroton or Prime Agra. Repotting should be done when the plant is in active growth. Paph. roots can be fragile, so be careful when handling them.

Regarding the MSU formulas, one type is for ground water (tap and well) as it contains minerals. The other is for RO, distilled and rain water, which do not have any nutrients in them.

I've seen vendors sell one type of formula, telling people that it's for all kinds of water. NOT!

I'd be careful about telling people how much to use, other than to follow the package directions. Our ground water fert. containers say 3/4 t. per gallon, whereas the RO/rain/distilled formula says 1/2 t. per gallon. This is for 125 ppm N., and what was recommended to us by MSU.
C

Wow Tadd! What an impressive setup you have! I would love to know how you are able to maintain this type of culture! What does watering day look like at your house! LOL! Also, I like your tattoo.

I don't have the room to set up tables in such a manor. My plants (during the winter months) are subject to a north or south window. My house does get cool in the winter. And, I find that what works best for me is intermediate growing orchids. I am lucky to be able to send my orchids out-of-doors in the summer. All of my orchids rejuvenate during these months. And I have a watchful eye during the winter months, but it can be a challenge, watering efficiently, and maintaining such an eclectic group of orchids.

My phrags do well in my environment. Sometimes it is a challenge to bloom them; however, they do grow large and green (took my Demetria ten years to bloom). Rita Cohen nicely explained to me that it took that long to mature... Maybe she was just being nice! LOL! This may sound crazy, but, I feel like I connect with the phrags. The paphs on the other hand are a mystery to me... And this is why I joined this group.

I have a number of paphs that I just can't seem to related to... My only reliable bloomers happen to be my fairrieanum and my liemianum ('Pussycat' AM/RHS X self). My spicerianum var. Giganteam is a moody bloomer. If I touch the plant while the bud is emerging it will blast. Meaning if I move it three feet away... All of my other paphs, that I have had for years have never bloomed for me. Frankly, I have no idea what these plants are... Some the tags faded thru the years, and some were giving to me by my friend who had to relocate to Singapore. I will list them, and maybe somebody will know something about them, or if the should be placed on the society raffle table! LOL!

1) Green Envy (primulinum X malipoense), this one was purchased at Bloomfields.

Finally, I am so impressed with some of this groups paphs and phrags. I really love the paphs, but I have been reluctant to add more to my collection. Any feedback regarding the paphs that I have or cultural advice would really be appreciated.

Wow. Nice pics. I'd love to know how many watts you're running there.
I

Oops. I didn't notice there was another page of postings. I was referring to Tadd's HID setup on page one.
N

Thanx H. It makes me chuckle when I think of Dr. Willie Williams pronouncing them paff-EYE-oh-ped-ih-lum at the GNYOS judging.

Search for information on Paphiopedilum Woluwense