Yesterday I stopped by Main St. Orchids, Perkasie, Pa. with one of my co-workers. I finally discovered that Mike/Main St was within 30 miles of my apartment and not far from Parkside Orchids.

Main St. is off the beaten path and at the present they don't have an active website. I'd purchased various plants including a very nice vigorous paph armeniacum from him at the gros show near rochester, ny and some phrag fischeri at the sepos show. unfortunately mealybugs carried away my armeniacum and mike didn't have any left. Instead I discovered to my joy/dismay that he likes to grow phal species! :rollhappy:

I left many plants behind, but ended up bringing home another phrag fischeri, a very nice paph sanderianum, a sophronitis coccinea, a phal lindenii and Mike gave me a very large phal bastianii keiki that had attached itself to the bench and one of his own hybrids, a brassavola nodosa x barkeria melanocaulon (brsk rosyleen). He showed me a near relative hybrid to the brassavola/barkeria cross which was very nice! I also made a promise to come back for a phrag manzurii seedling when he felt they were big enough to leave the greenhouse. there were manzurii hybrids and the species seedlings when sized up will be $45 which I thought was a good deal

Last winter I found Mike at sepos and he had a few phrag fischeri seedlings for sale at his table. They were only $35(!). I bought both of them. I bought another yesterday since one of mine I allowed to dry out too much . He has 'lots' of fischeri seedlings in the pipeline and a decent number of phrag manzurii seedlings which are still coming up to size. I told people that I was surprised he had these seedlings at a reasonable price and wondered why nobody was buying them etc and it turned out that he didn't have a website so people weren't looking/expecting to find them, and he usually doesn't do mail order. Mike has contracts with businesses in the philly area to supply flowering plants for them in rotations. He also rents out space in his greenhouses for clients, sells at shows and sometimes goes to other greenhouses to care for people's plants. The contract growing pays the bills, and on the side he finds plants here and there of interest, buys a few and grows them up in his greenhouse; some of the phrags, paphs, aerangis and phals (and more) were quite big, and in very nice shape! He has I think two phal gigantea that are between 10-12 years old and are in very nice shape. Things look very happy there, and there are fans and lots of air movement everywhere, which is very very important. I didn't have time to poke around as much as I would have liked and I had to keep my hands in my pockets so Mike wouldn't hand me something more to buy! I will be back, though once I get settled with my new job (and a regular paycheck starts up again)

If you are in the area, I would definitely get in touch with Mike to set up a time to visit, because he has lots of really large plants that would have to be divided before they could be sold to most of the public but in the greenhouse you might be able to ask about certain plants and get a great deal! plus his dogs are very fun to watch! 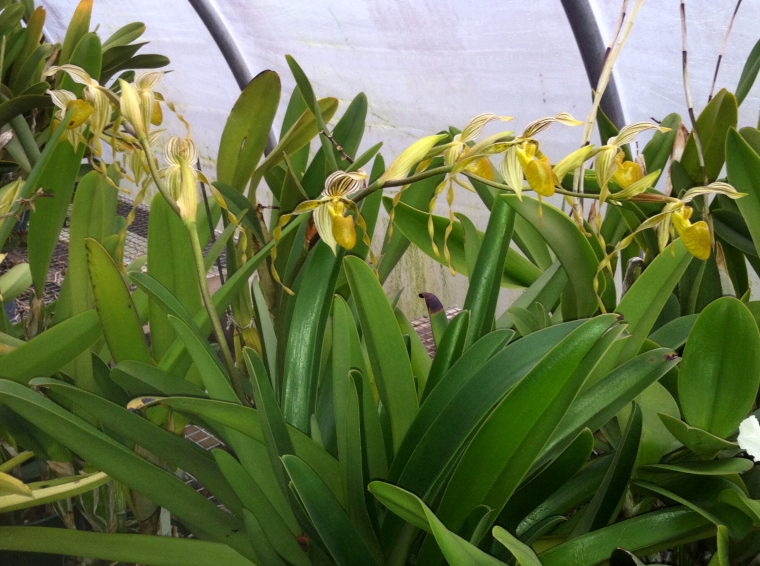 this is a huge paph kolopakingii x paph philippinense I saw just before I left;
had to run to my coat and take some pics. there had to be a dozen growths
along with the two spikes 10-12 flowers. the flowers were actually fairly lightly
colored; I needed to add some contrast to the pic so they may look a little
darker than in person 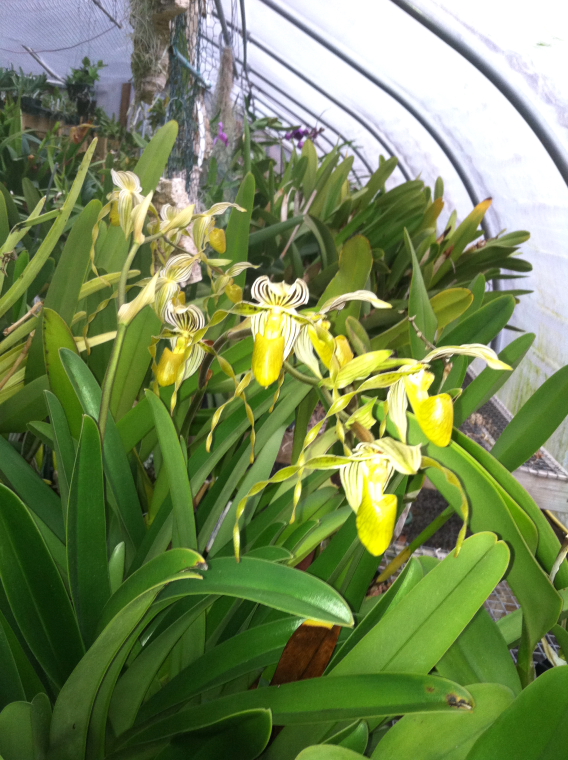 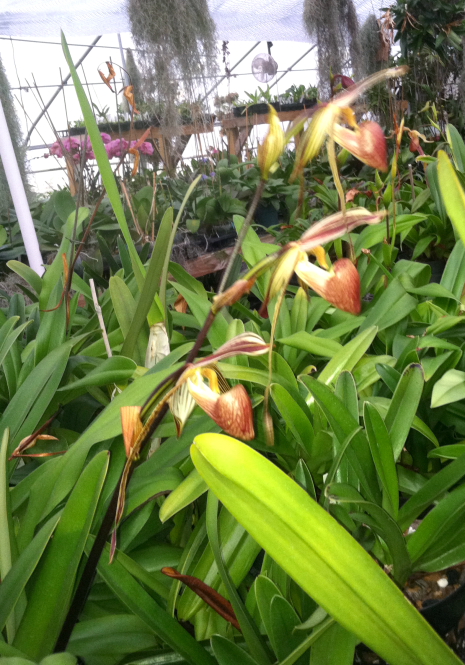 this was a very nice paph lady isabel 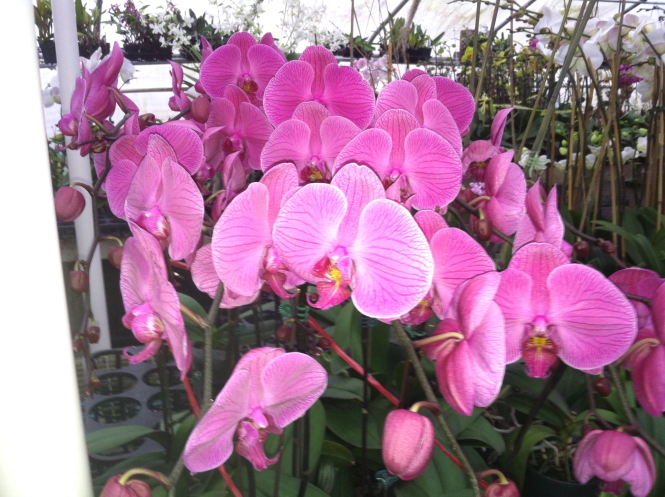 one example of the phals used for contract displays 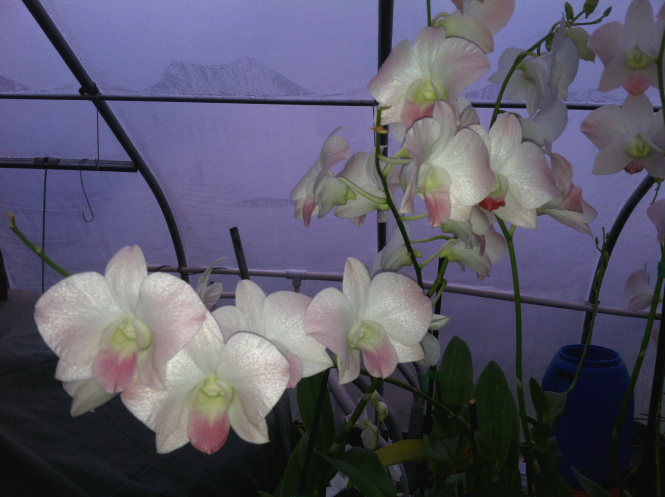 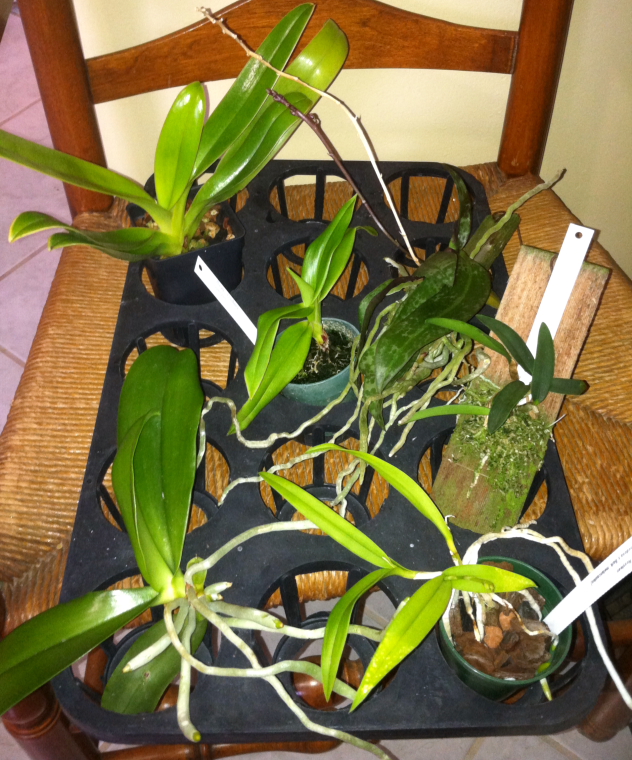 what I bought and brought home!

mike's plants aren't just hanging around staying alive, they are growing and looking happy! i asked mike if he had any reasonable sanderianums and he found this one growth one probably 4-5 yrs old for $45! hope I can keep it looking as happy as it does now

*okay, went looking online for the brassakeriawhatever cross, and it looks like if it is a b. nodosa x barkeria melanocaulon then it's hybrid name is supposed to be Brsk. Mayan Spirit
Last edited: Nov 17, 2014
L

great pics! that huge kolo cross is impressive. and great deal you got on the sand. thanks for posting the travelogue!
N

Mainstreet Mike is a very good supplier at northeast shows. Plus if you need something he can get it for you. Thanks for the info on the Phrag seedlings.

He lurks on this forum, if you want something special, post it.

NYEric said:
He lurks on this forum, if you want something special, post it.
Click to expand...

I'll be going back sometime, I could also look for something in particular

IDK if he is a member.
A

There's actually an ebay supplier that lives less than 10 miles from my new town, though visits aren't allowed (no customer insurance)
Oh, and I won a phrag andreetae seedling on ebay yesterday, $39. Seller has great rating so hopefully it will be true to name and survive

NYEric said:
IDK if he is a member.
Click to expand...

What a fun day.

Yes! Poking around greenhouses (and Internet websites) looking for interesting things, talking with growers/business people about what does or doesn't work is fun. .... just a problem when the sun goes down you have to go home

Though it's probably a good thing for me that I didn't discover til now how close they were, or I'd be broke and have too many plants to move to new apt :rollhappy:

Mike appears to be shifting his approach a bit. In the past, since moving up to Perkasie (about 15 minutes from me), his primary focus was plants for offices, and outside of local shows, didn't appear to do much direct selling to hobbyists.

Mike is a great guy with a lovely, very dry sense of humor. I had the pleasure of "auctioneering" with him at one of our society auctions, and it was a blast.
N

SlipperFan said:
No no -- which "special" thing am I looking for...
Click to expand...

You mean which things, right?! oke:

okay, here's an interesting thing.... I went online to check whether or not phrag manzurii or andreetae was the one which would branch. I saw that it was manzurii, but while first searching out 'andreetae' I saw that there was an ebay auction for an andreetae that was starting at $39. first and last one I saw for sale was for $85, so I thought 'heck i'll bid on it'. I saw that three other seedlings had been previously up for auction and for two I think only one person bid on each and won for the minimum bid. checked history for seller, 100% good. so placed bid.
meanwhile, I remember that the phal lindenii that I bought from mainstreet mike was in spike so decide to ask around if I can find someone with either another decent lindenii in flower I can buy, or borrow some pollen from. I post to the ogd, and a short while later someone responds... I notice the location and email address and compare with the andreetae info and it turns out the pollen offerer and the andreetae vendor are the same person! how small a world is that?!

* the andreetae came today, a day earlier than the ebay delivery estimator said it would (or maybe two) and the seedling looks nice. hopefully it didn't get chilled, it was well insulated and there was a heat pack inside. was left outside on front step when I expected mail delivery person would leave note for pickup at post office; there was some sun today so though brutally cold first thing, likely when package delivered was just warm enough to be okay

though not sure if I can buy more plants at moment, after helping friend pack moving van today, on way home transmission decides it only wants to work in first gear and no reverse (sigh)
N

I know for a fact that one of those andreetae is in NYC and another in Canada!