This is a Fisher cross of kovachii ‘terminator’ x besseae ‘rob’s choice’(4n).
Its always been a vigorous grower right from when it arrived as a small seedling. There is also no evidence of any climbing, despite it being two thirds besseae. This makes culture so much easier.
This is it’s third flowering on what looks like the first truly mature growth and showing it’s true potential.
The flower is already 12cm across and it’s only just opened yesterday. It may add another centimetre when fully expanded.
There is no need for a stake. The spike is thick and very stiff. It is also branching. 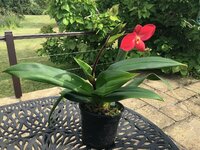 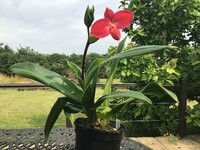 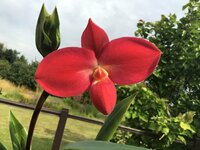 Absolutely gorgeous. I think I'll make room for one

I have some of these as seedlings. Hope they look like this.

Rich, it’s difficult to find something of this quality from other Fritz crosses…
T

Orchids Limited made two different polyploid Fritz Schomburgs. David is showing the 'Terminator' x 'Rob's Choice' cross and I have the besseae 'Rob's Choice' x kovachii 'Tessoro Morado' cross. They both produced some outstanding plants. The flower on mine looks the same as David's with similar size. The tetraploid besseae 'Rob's Choice' has been a fantastic parent and controls the size, shape, and color of most of its progeny.

richgarrison said:
from what i recall these were quite pricey even as small seedlings... (150$ ish)...

Rich, the only one Orchids Ltd shows on its website now is the 3N Tosoro Morodo x Rob’s Choice at $300 which is what I thought David’s 3N cross had gotten up to before they were gone.
Last edited: Jul 27, 2021

Absolutely gorgeous, David. Beautiful growing, too. I’m trying your culture for Phrag besseae to revive mine for a Hail Mary before they die. Hope I save them.
A

A true red David! This stunning color should make you very happy. I have two Fritz made
with 'Rob's Choice'. Both are slow growers, but coming along fine. I'm so looking
forward to blooms.

SB, you are certainly dedicated to growing besseae. Good luck!

Thanks for the comments!
There is a tale to tell about these triploid Fritz crosses from OL. In the spring of 2017 I received two small seedlings from the cross between Tesoro morado and robs choice.
Now it’s quite a perilous journey for a small phrag from their home, crossing the Atlantic to Germany and from there to the UK.
One of the seedlings arrived looking the worse for wear and subsequently faded away to a small leaf and a nub.
I contacted Jerry and they promised to send a replacement.
That seedling arrived in the autumn of 2017 and was this plant from the other triploid cross. It was larger than the other two seedlings and has always been a vigorous grower.
However in the meantime, I managed to save the poorly seedling so I’ve ended up with three triploid Fritz.
Comparing the three plants, one of the seedlings of Tesoro morado is as good as this one from terminator but the other is very so so. It’s the luck of the draw with seedlings.
Overall I cannot complain. Two top quality plants out of three is a great result.
As is usual with these things, the one with the dodgy flower is much more vigorous.
Angela, the colour isn’t quite as fire engine red as the photo shows!
The iPad camera slightly flatters the reds plus there was a bit of weak sun on the plant when the photo was taken.
T

My 'Rob's Choice' x 'Tesoro Morado' is now two plants and they have healthy root systems but are still slower growers as many polyploid plants can be. Not as slow as my tetraploid besseae however! I have heard some long-experienced experts talk about looking over seedlings trying to find the runts because this is where the tetraploids lurk. The vigorous seedlings may be the first to bloom, but not necessarily with the best flowers and that is what David is describing.
A

David, it sure screams RED to me!
R

monocotman said:
Rich, it’s difficult to find something of this quality from other Fritz crosses…
Click to expand...

yup these photos make me want to chuck the 3 i have ... one from orchid zone back in 2014ish..,, which of course was 150$ but it did have 2 flowering growths... and 4n characterisitics... (when i found that plant amongst the 100 or so seedlings, John was regretting telling me 150$ for any plant you pick )

what a lovely chonker!!

A mature flower with photos taken in dull conditions that show the true colour more closely. 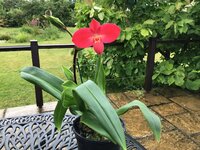 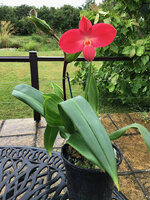 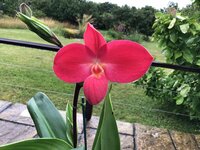 I think I exceeded 13 cm just looking at the photos!