Phrag. brasiliense was described by myself and Olaf Gruss, and was published in the Orchid Digest (Vol 67(4)).

According to Jerry Fischer, he had received two unlabeled plants from Ron Ciesinski of Taylor Orchids, Michigan, and according to Jerry these plants had been purchased over 20 years earlier by John Fitch from Margaret Ilgenfritz who had originally imported them from Brazil.

We had labeled them all these years as Phrag. vittatum.

When they came into bloom, they were clearly not Phrag. vittatum, but something different. As Jerry believed that they were a wild species native to Brazil, we wanted to give them a correct name. We contacted Olaf Gruss who is one of the leading authorities on Phragmipedium species. After sending a whole bunch of photos he agreed that it was indeed a new species. I asked at the time if he thought that it might be a hybrid (natural or man made) but he did not think so. He compared it to all the existing hybrids that he knew of, and still could not identify it. As I have a background in Plant Taxonomy, me and Olaf agreed to write a paper on it and to describe it.....and so Phrag. brasiliense was born....

After the paper was published people emailed me (including Guido Braem), and stated that Phrag. brasiliense was not a true species, but actually a man made hybrid between Phag. sargentianum and Phrag. pearcei known as Phrag. Patti MacHale (or synonym Phrag. La Moya). I even heard that Ron Ciesinski had made this hybrid, or that he had bought them from someone who had made this hybrid, and then they got mislabeled....

Now Jerry is still convinced that it is a natural species, as when he went to England he was looking in an old Botanical book by Pabst and Dung, (Orchidaceae Brasilienses), and saw a color plate that was labeled as Phrag. caricinum. He was convinced this was the elusive Phrag. brasiliense. See picture from Papst and Dung: 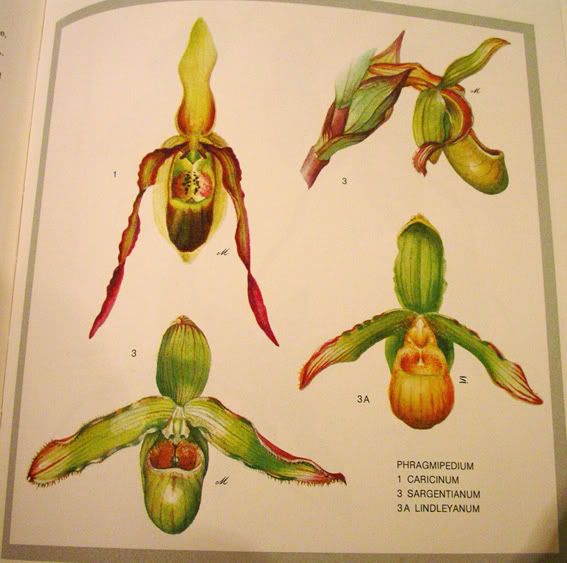 I agree that it is not Phrag. caricinum see the following link for a picture: http://www.portersorchids.com/Images/Phrag_caricinum.jpg

but if you compare it to a picture of Phrag. vittatum:

I think this picture is probably Phrag. vittatum, and not what we call Phrag. brasiliense.

Now this leads us back to Phrag. brasiliense. Following are some pictures from our plants: 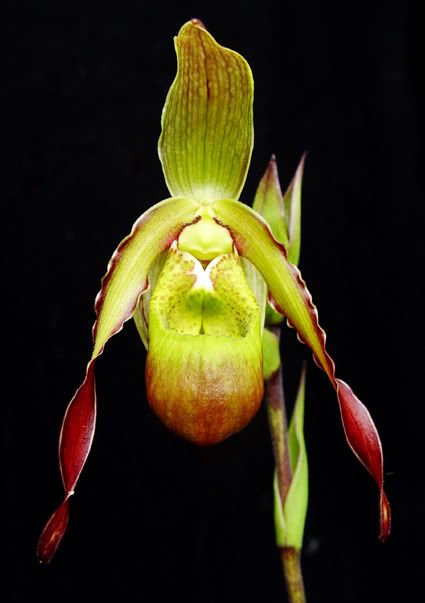 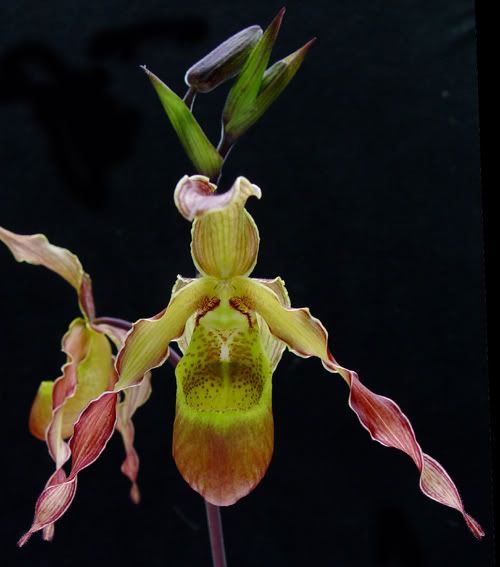 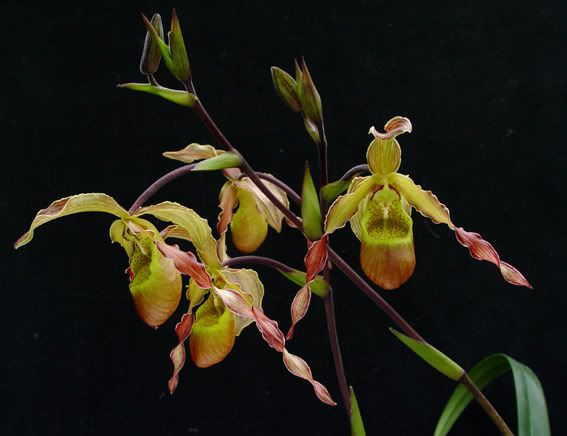 Now I am going to refrain from saying what I think it is.....natural hybrid .....man made hybrid....or true species......I want you guys to discuss what you think Phrag. brasiliense is ......

as for me don't know. don't care. looks nice. i like . Thanks for the pic doc

I would guess it's probably a man-made hybrid between Phrag. vittatum and Phrag. sargentianum. I suppose it could be a natural hybrid since both of the parents are from Brazil. However, their distributions haven't currently been found to overlap, so a natural origin is a bit of a long shot.

The bloom has the auricula (pointy projections along the opening of the lip) characteristic of Section Lorifolia, but they're poorly developed. I would think that's a result of having one parent from Section Lorifolia. I am guessing it's Phrag vittatum because of the undulate petal margins and vittatum's distribution in Brazil.

This pic shows the auricula on longifolium, another member of Section Lorifolia:
http://www.slipperorchids.info/phragspecies/Phraglongifolium3.jpg

The other parent would have to be from either Section Himantopetalum or Platypetalum. I am guessing sargentianum because of the intense red petal tips and the rounded shape of the pouch. Also, sargentianum has a fat staminode that matches up nicely with the pics of brasiliense.

Has OL carried a lot of vittatum hybrids in the past? I have a plant from them I got about 7 years ago that definitely has some vittatum in it. It's the only plant I've ever got mislabelled from OL, and I'm very glad it was.

Jon, when I was doing some research to write this thread I came across the following posting from the Slipper Orchid Forum:


Jon in SW Ohio
06-05-2005, 10:09 PM
I ordered a Phrag. Mem. Dick Clements from Orchids Limited years ago in a large order and it never looked quite right. When it finally bloomed, I thought it was vittatum although not an exact match. I am waiting for it to bloom again now that chapadense and brasiliense have been described. I e-mailed them when it bloomed as to its possible ID but never got a reply. I always suspected it was an undescribed species and when the OD had a description for brasiliense from Orchids Limited, my jaw dropped.

I will be sure to share it with you all for opinions when it blooms as it is a large multi-growth plant. I have never had any problems growing it along side all my other phrags.

I assume you were referring to that plant. Has it ever bloomed for you again? I would like to see some pictures. We sibbed both plants that we now call Phrag. brasiliense a few years ago (They were still labeled as Phrag. vittatum at the time) and got a bunch of seedlings to grow. I am thinking that your mislabeled plant was one of these seedlings. We have some "true" Phrag. vitatum's as well (Although I have never seen them bloom), but thus far I know, we don't have any hybrids made with Phrag. vittatum.

Yup same plant. Still no blooms, but they were much more green than the pics of brasiliense above. Almost like how I imagine (vittatum x boissierianum) would look.

We did notice some variation in the seedlings; some were more green and some were deeper red in color......to me proof that we were dealing with a hybrid.....in the next generation you get seggregation, and some seedlings look more like one parent and some more like the other.....

How large are the plants? I would think if sargeantianum was involved, it would be obvious in the size of the plants as well. Then again, I don't know how large vittatum gets.
D

I found some pictures of two seedlings that we made from the original parents that we got. It shows the variation in size and color of the flowers. 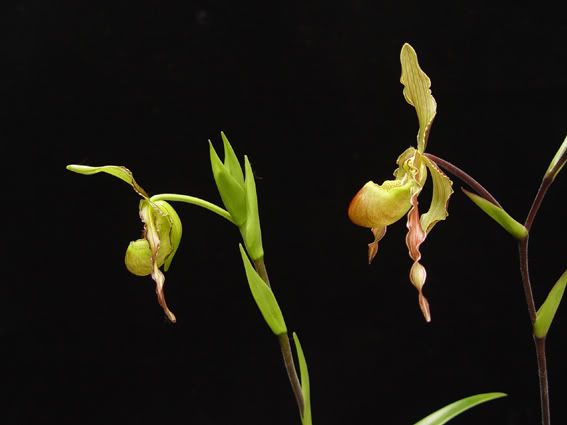 Heather said:
How large are the plants? I would think if sargeantianum was involved, it would be obvious in the size of the plants as well. Then again, I don't know how large vittatum gets.
Click to expand...

I would say the plants are pretty large now; they have a leaf span of about 20 inches across, and the Flower spikes are about 25 to 30 inches tall.

Drorchid said:
I found some pictures of two seedlings that we made from the original parents that we got. It shows the variation in size and color of the flowers.
Click to expand...

The biggest difference I can see between your photo of brasiliense and vittatum is the inside of the pouch. That's the place I can see a resemblance to Patti McHale.

Interesting that our (Porter's Orchids) caricinum doesn't look much like the one in the illustration, either.
O

Dear Robert,
before we described Phrag. brasiliense, we discussed also the possibility of a natural or artificial hybrid.
Now some year were gone, but I think there are no new informations, that it would be necessary to change the decision that it is a distinct species.
Most of critics based only on speculations, because the hybridzation with Phrag. vittatum is also unknown today. There exist only some hybrids but they are not often to find in the collections.
When we decided to describe Phrag. brasiliense as species we had also the possibility to control the cross between longifolium and vittatum (Phrag. Arthur) and the cross between lindleyanum and vittatum (Phrag. Hochgern). My friend has both in culture and I could see them in bloom. They are realy different from Phrag. brasiliense.

It is very clear tat it is no Phrag. vittatum, the leaves of this species are so different, that the determination is no problem.

The pic of Phag. sargentianum and Phrag. pearcei is the Patti MacHale in my collection. I have a closer pic of it and will locate it and post it here for comparison purposes. The spike tops out close to three feet tall and blooms sequentiually from about December through May. The second picture was of a previous blooming. 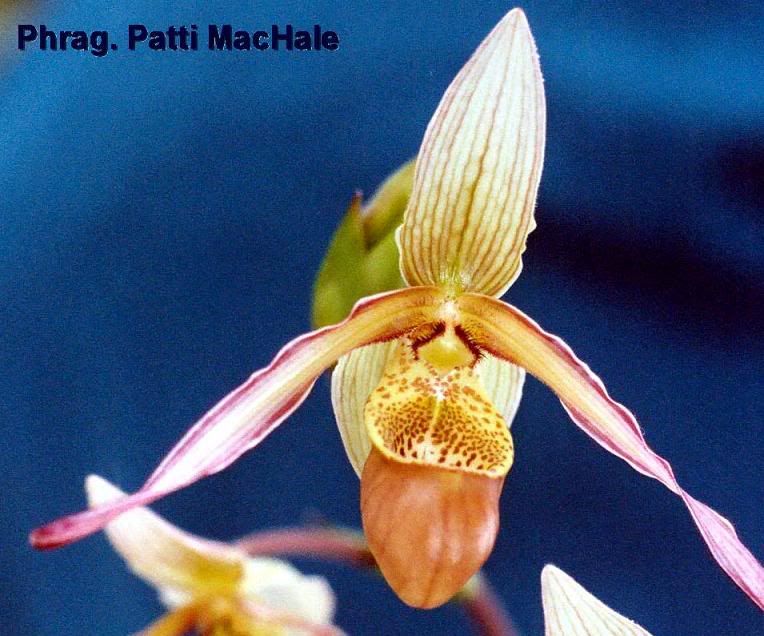 Thanks Ron for the pictures.

Even though there is some resemblence between Patti MacHale and Phrag brasiliense, based from your pictures they do look a little different.

I am speculating that Phrag brasiliense may be either:

1. a natural (or man made) hybrid between Phrag. sargentianum (or lindleyanum) and Phrag. vittatum. (Does anyone know if this hybrid has been made, or if there are any pictures of this hybrid?)

I didn't turn anything up on an image search for P. Memoria Adele Bishop.
R

Drorchid said:
Thanks Ron for the pictures.

Even though there is some resemblence between Patti MacHale and Phrag brasiliense, based from your pictures they do look different.

I am speculating that Phrag brasiliens may be a natural hybrid between Phrag. sargentianum and Phrag. vitatum. Does anyone know if this hybrid has been made, or if there are any pictures of this hybrid?

Ron , one more question, you said your Patti MacHale always blooms from December to May. Do they always do that? Our "Phrag. brasiliense" started to bloom about 2 weeks ago.

Thanks for the info. Olaf sais he has seen the cross between Phrag. lindleyanum and vittatum (Phrag. Hochgern). I think that Phrag. sargentianum x vittatum (Phrag. Memoria Adele Bishop) will look very similar to this. According to Olaf sais Phrag Hochgern does not resemble Phrag. brasiliense at all. So I guess we can rule out posibility #1.

There is one more possibility:

It actually is a true species! I guess only time will tell. If someone ever discovers more of these plants in Brazil, than we will know for sure.

I went into the greenhouse and noticed that both sargentianum, pearcei, and brasiliense were in bloom, so I had to compare the flowers. Here are pics: 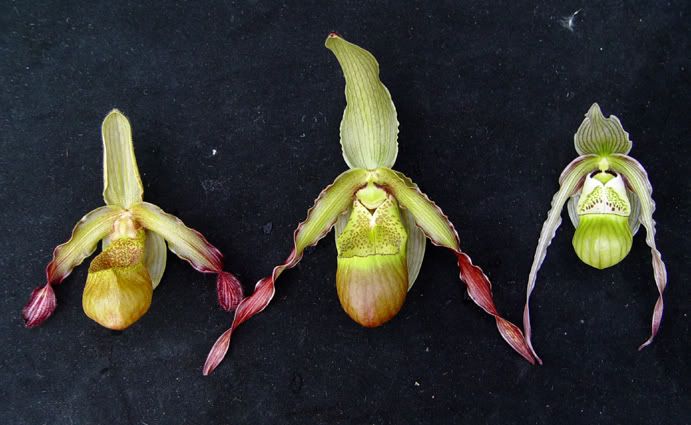 sargentianum is on the left, brasiliense in the middle and pearcei on the right.

Here is a close up where you can see the staminodes and the inside of the pouches:

Based on these comparisons. I don't rule out that Phrag. brasiliense is sargentianum x pearcei. Both the staminode and the spots inside the pouch are intermediate between both species. What do you guys think?

Drorchid said:
Ron , one more question, you said your Patti MacHale always blooms from December to May. Do they always do that? Our "Phrag. brasiliense" started to bloom about 2 weeks ago.

I can't say always, for come to think of it, I purchased it is October of 2000 and it was in bloom then. For the last 4 years it has bloomed early winter to late spring.