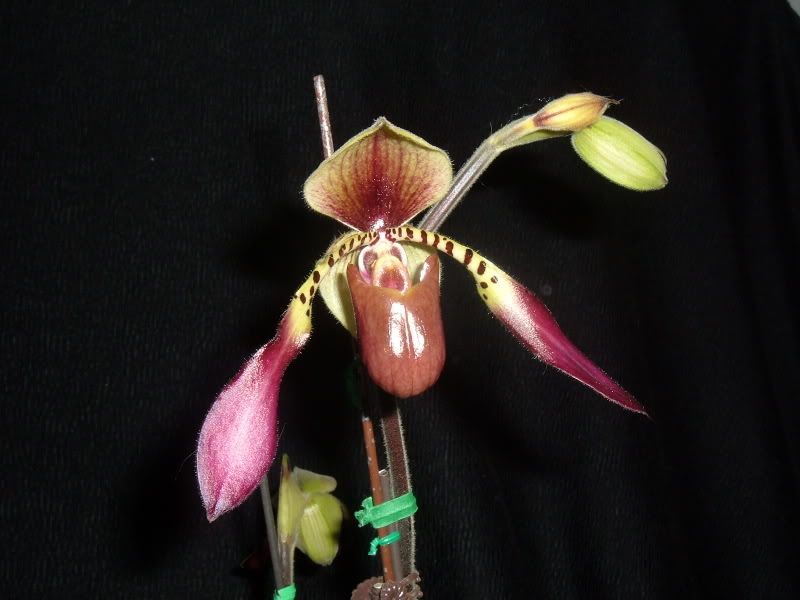 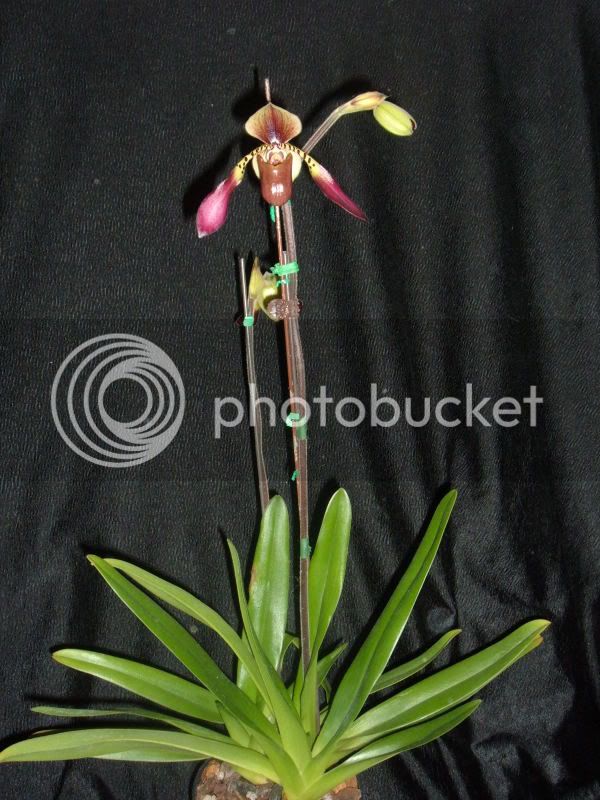 Tag said Winged Flight but it looks like lowii to me what do you think?

looks like straight lowii to me but the color of one of the petals kinda makes me think it might have some Bernice in it....
i just looked at pictures on the web and most look mostly like lowii so i ain't got no idea...
R

Looks like lowii to me too. Can you get a closeup of the staminode?
E

Looks like lowii....petals are a bit droopy, but I'm sure that it's within the very wide range of lowii....Take care, Eric

Eric Muehlbauer said:
Looks like lowii....but I'm sure that it's within the very wide range of lowii....
Click to expand...

As far as I'm able to asses it from your photos I agree to Eric. Flower shape, markings and even the staminode (as far as it's visible) are P. lowii like.

Keep the Winged flight tag, and put it as hybrid anyway, no one will ever know if it could have been a lowii, even the most skilled taxonomist. Only DNA analysis could get a result for that plant.

Winged Flight is 75% lowii, and typical of a VERY stupid and dangerous hybrids, in the line of malipoense x jackii or many brachypetalum fake species.

And I see that Orchid Inn even has Winged Flight x lowii, which will be nearly like a pure lowii (87,5% lowii!), but with longer petals. That kind of crosses should be definitely banned.

I have to throw in with sanderianum, keep the tag. Don't screw the species up. Also some things don't look right with this plant. I've had a few lowii's and none ever had straight up leaves. What's the flower count? Nice big plant for just two flowers per spike if I have the count right.
R

There is another bud comming on one of the spikes. I did talk to the vendor again and he said this cross comes into bud with different ways of showing it's petals some are as mine yet others go more straight out and with thinner petals. as compared to a Lowii. I trust him as I have known him for years and has no reason to try to put one over on me. I think as you do maybe this sort of cross should be banned. These petals are shorter than a Lowii and the dorsal is just a shade different . You really have to look. I do enjoy the colors and of the pictures I have seen of Winged Flight looks like the plant can produce more than a few flowers. Thank You for your thoughts

Frankly, just looking at the pic, at first I though it could be a Sabah form of lowii, which has exactly the same dorsal and colors. But the plant has something strange, definitely. It reminded me a little of hanyaldianum shape of the growths, but not lowii...

I do not see any point to make this kind of hybrids, some lowii are as beautiful as those Winged Flight and the like. Except that of course those hybrids grow faster, sell faster...
P

Rayb said:
Tag said Winged Flight but it looks like lowii to me what do you think?
Click to expand...

Looks like Winged Flight. It's not lowii. The tag is correct.

Is this paphiopedilum lowii?
2

M
Is it possible to successfully cultivate P. fairrieanum, P. lowii and P. venustum in a house?
2