I received my first order from Orchid Inn earlier in the week and I took yesterday afternoon off to get them repotted. Some had absolutely fantastic roots, some had ok roots, and some had rather disappointing roots. Sam also included a bonus delenatii album, the Paph. glanduliferum var. gardineri that he sent is in sheath/low spike (without charging extra), and I received an in spike delenatii vini for an extra $5.00. If anyone is curious about Sam's response from my "ordering etiquette" thread, Sam said they normally charge $5 (single flower type) or $10 (multifloral) additional for in bud or in spike.

Sorry for the less than stellar pictures, I just used my phone camera to document the new plants.
Here is the group before repotting: 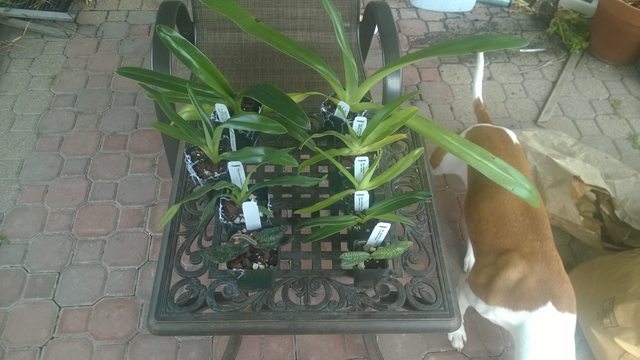 I didn't take an individual picture of the delenatii vini (front left corner) as I am waiting to repot it until after it blooms. But the cross on that is PAS0494 Paph. delenatii vini (Full Moon x Purple Lantern)

And now the individual pictures after cleaning them up but before potting:
PHH0069 Phrag. Eumelia Arias (has multiple new growths and new roots starting! 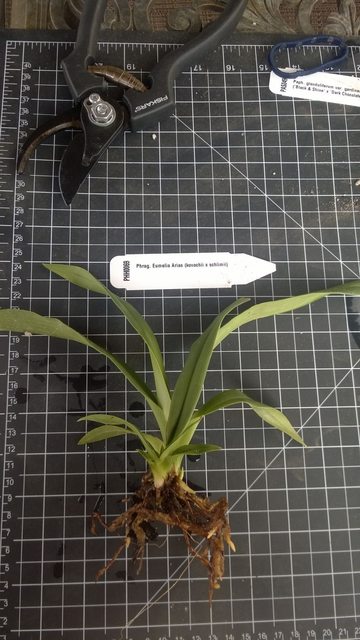 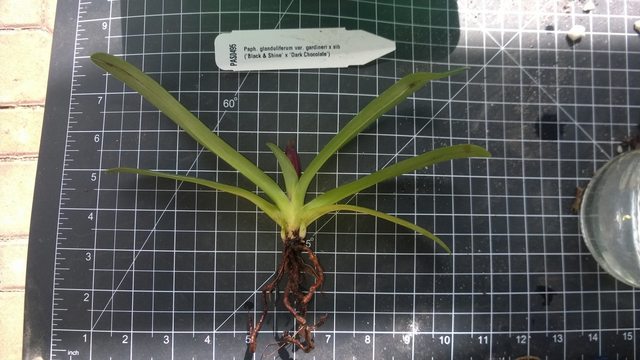 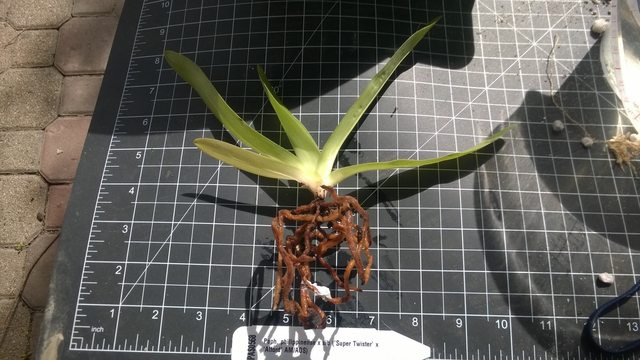 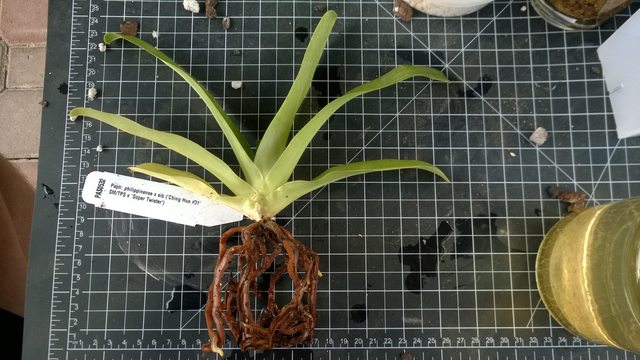 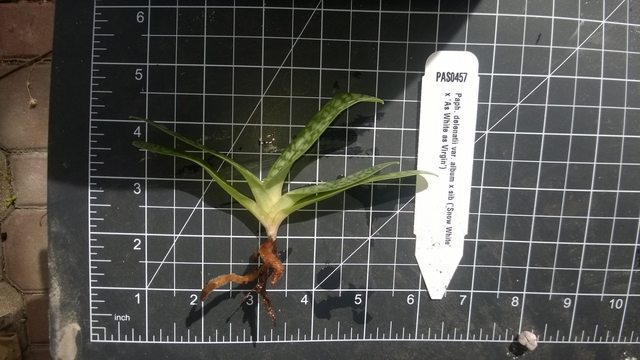 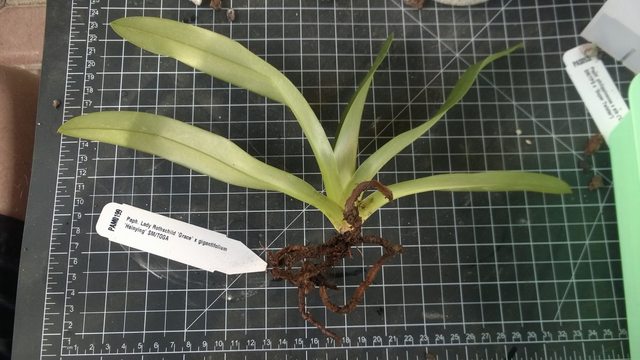 PAM0205 Paph. gigantifolium x Lady Isabel (a little disappointed with the roots on this one but at least it is a nice big healthy looking seedling) 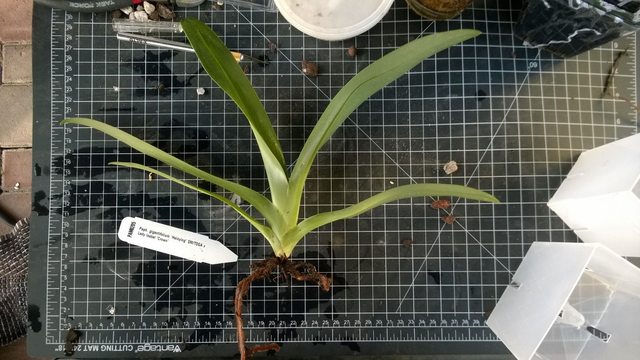 PAM0052 Paph Hung Sheng Eagle (huge healthy looking plant; unfortunately, the roots were all mush. Luckily there are at least 4 or 5 new roots started and a TINY new growth as well)
Here is the plant straight out of the pot with untrimmed roots: 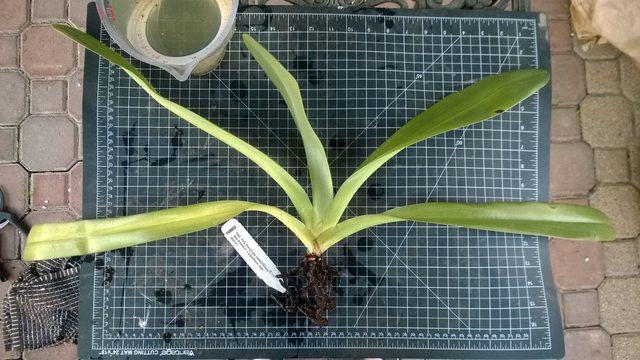 Close up of the mush: 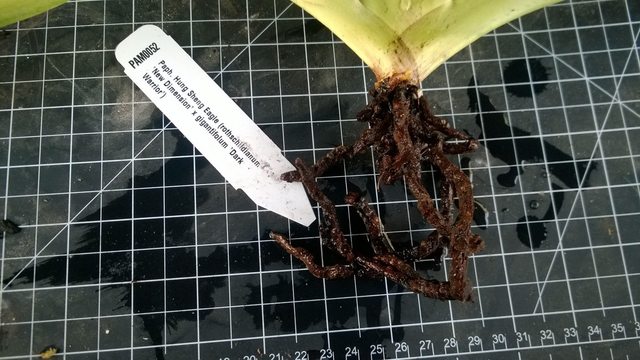 Trimmed up and ready for potting: 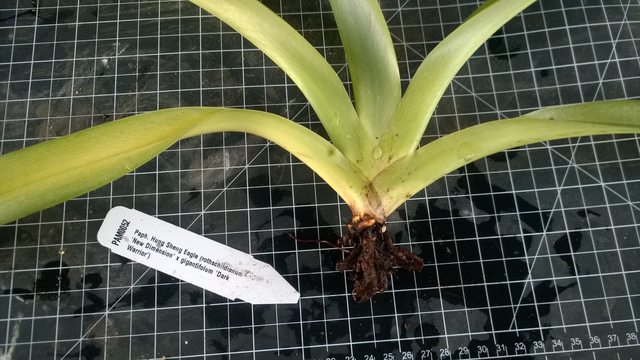 dont know how experienced you are with Sam's plants...I would suggest you put the plants with low root mass in low light. Fortunately, Sam's plants seem to have plenty of food reserve to survive without much setback..as long as they don't get too much light

agree with Ed. Overall nice plants but the ones with poor roots will need some TLC to get used to your conditions. provide low light, low feeding, high humidity, and keep rootzone moist. Also a kelp product would help with starting new roots.
A

Nice plants. Now who's the owner of that lovely back and
tail? Truly, I love orchids, but I love dogs more. Might I
see the head that goes with the rest of the body? Please.
N

Good luck. Thanks for sharing
M

abax said:
Nice plants. Now who's the owner of that lovely back and
tail? Truly, I love orchids, but I love dogs more. Might I
see the head that goes with the rest of the body? Please.
Click to expand...

here is the lovely Ms Willow doing her best to make sure I don't reuse a dirty pot: 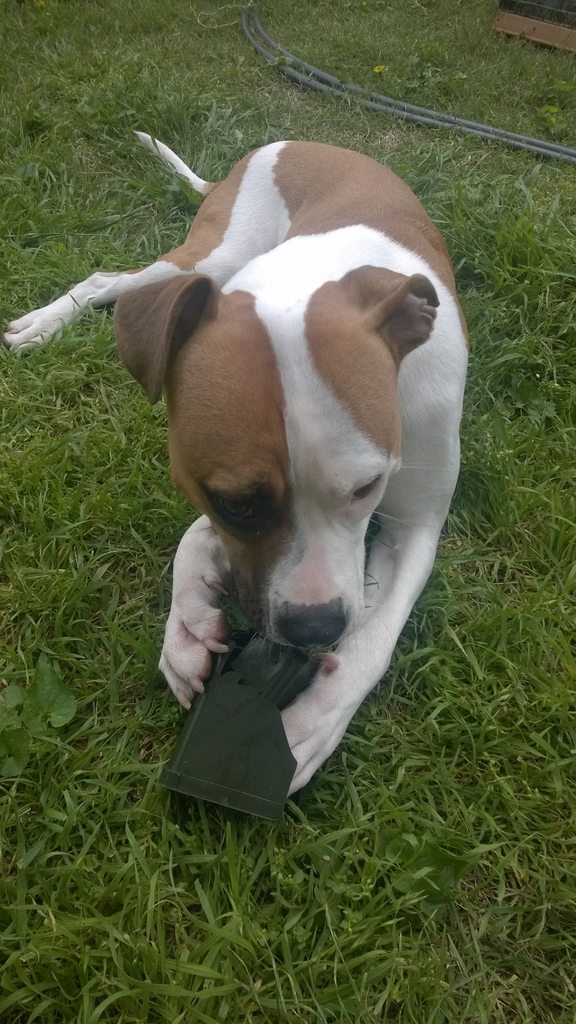 and here is her glamour shot: 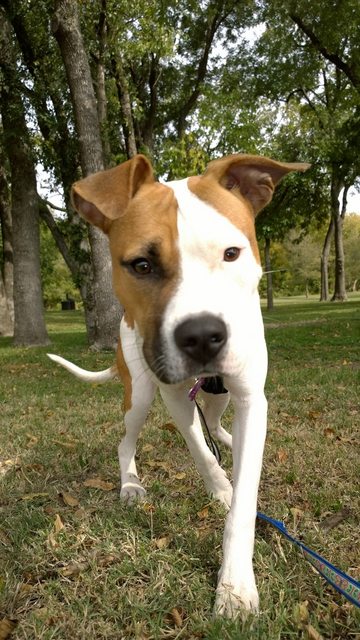 Plants look great,Sam's plants comes with a tremendous survival skills. I haven't able to assassinate even a one of them and got over hundred from him.
And,he always sends a little gift tucked in somewhere in the box.
D

And she is the sweetest thing that thinks she's a lap dog...

Congrats......that's a nice selection. Quite a wide range of root volume. They are all acceptable IMO except the Paph Hung Sheng Eagle. I'm sure Sam wouldn't have sent that one if he'd realized the roots were in that kind of shape. You should make sure that Sam knows, in case it just goes dowhill and craps out on you. Howevr, it looks like a good, strong plant; so, with proper care, you'll probably do just fine with it.

I suggest that you do not keep the rootzone moist (sorry Justin). As long as you keep the plant in low light and the leaves are able to enjoy high humidity, you should keep the rootzone just a little bit on the dry side...shoot for humid roots, not moist. This encourages the plant to grow new roots to go looking for more water. Keeping the root zone moist can easily mean it stays too wet for too long, which discourages new root growth. A good way to create the right atmosphere is to put the plant inside an old aquarium with an inch of water in the bottom. Keep the plant pot above the water and run a very small fan inside, 24/7 (always be VERY careful when using electricity near water!). Plus, cover the top about 90% to hold in humidity, but still allow excess heat to escape. Plus, until you see new root growth, use only rainwater with no added fertilizer to initially moisten the potting mix and when any more waterings are required. It helps a lot to put such a plant into a small, clear pot (I use 7 and 14 oz clear plastic beer cups), so that you can monitor the moisture inside the pot and see the new roots when they begin to grow. Good luck!
I

Sam has been away for awhile,he's back in Japan now and most likely your plants were packed/sent by his greenhouse helpers who didn't pay attention to soil moisture as they packed. Cold air and moist/wet soil may have turned it into mush during shipment.

Best to write him to let him know,he will answer but it will be a very short message,don't take that as he doesn't wish to hear about the mishap.

New from the Orchid Inn

B
I wish me a merry Christmas (from Sam)