in the first world war the medics used sphagnum moss filled wound compresses
to treat heavy shot wounds ,
at that time they didn't have readily access to any anti biotics
somehow the sphagnum moss filled wound compresses did a similar job and resulted in the wounds not getting infected.
i can remember about 30 yrs ago visiting a real old style paph maudiae grower
he was growing in these semi submerged in the ground greenhouses with stone tablets he was growing paph. maudiae for cutflower trade the plants were deep in live spaghnum,
he was cutting some flowers and managed to cut him self very badly , i asked him if i had to get some i odium for him ,he turned around and said don't bother and stuck his finger deep in spaghnum moss filled pot after 1 or 2 minutes the bleeding had completely stopped, a week later i stopped in his place again and asked how his finger was doing, he showed it to me and it was almost completely healed !
so if it's a good enough for cut fingers i think our paphs will be happy with it to
happy orchid growing from Northern Thailand
cliokchi
E

Awesome and well thought out presentation!! Thank you so much for taking the time to share this important information with us!

Very nice to see your experience with growing in live sphagnum. I do too, and have had great results with Masdevallia, which don't like much fertilizer either, so they do well in sphagnum. I also tried with a Phrag Jason Fischer (not long enough to have results yet).
I found a solution to avoid too much water at the bottom of the pot : I use a layer of hydroton (clay pellets) about 1 inch, and the live sphagnum on top. The pot sits in a saucer of pure water, and the wicking effect of the hydroton pellets provide enough water for the sphagnum to grow.
I also found that a small amount of fertilizer (30 ppm N) in water once a month does not kill the sphagnum (if too much fert., the tips of the moss turn brown), if the day after I rinse thoroughly with clear water.

Jaljala, that's great information. I tried fertilizing by drenching the sphagnum and let it sit in the dilute fertilizer solution. It etiolated quickly and the whole thing turned white in a few days. Rinsing it timely may be the solution.


Mrs. Paph said:
...have you tried foliar feeding the plants? Perhaps make sure the moss is pushed down, hold the plant in the pot sideways and spray the foliage with your fertilizer mix so it's getting to the plant rather than drenching down through the live sphagnum? Yes you'd have to lift up individual pots and tip them sideways to fertilize, but it could be a worthwhile experiment to try! ....
Click to expand...

Mrs. Paph, I havent tried foliar feeding actually! Thanks so much for your suggestion, I should do it next time! Well, as I mentioned earlier, it's okay to sprinkle dilute fertilizer very lighty on the moss surface. I find that doing so will cause the moss to emit a rather nice fishy odor, instantly
E

That was an absolutely GREAT post! I love having you in the forum!!!

Aww, thank youu! I feel flattered now.
It's my pleasure sharing growing experience in this forum! Have learnt so much from others here, so trying to contribute is a way for me to give back
B

hardy said:
Thanasis, I think sphagnum needs to be replaced from time to time, because it turns into something nasty as it decomposes. If allowed to dry between waterings, it can stay good for longer periods.
Click to expand...

Just wondering if a slow-release fertiliser like Osmocote might be useful in this situation....?? Or will it still be too 'salty' for the moss?

paphioboy said:
Just wondering if a slow-release fertiliser like Osmocote might be useful in this situation....?? Or will it still be too 'salty' for the moss?
Click to expand...

this is worse than watering with very diluted fertilizer... talk with experience

Yesterday I had to deflask my P. primulinum (earlier than expected). So I give it a try: 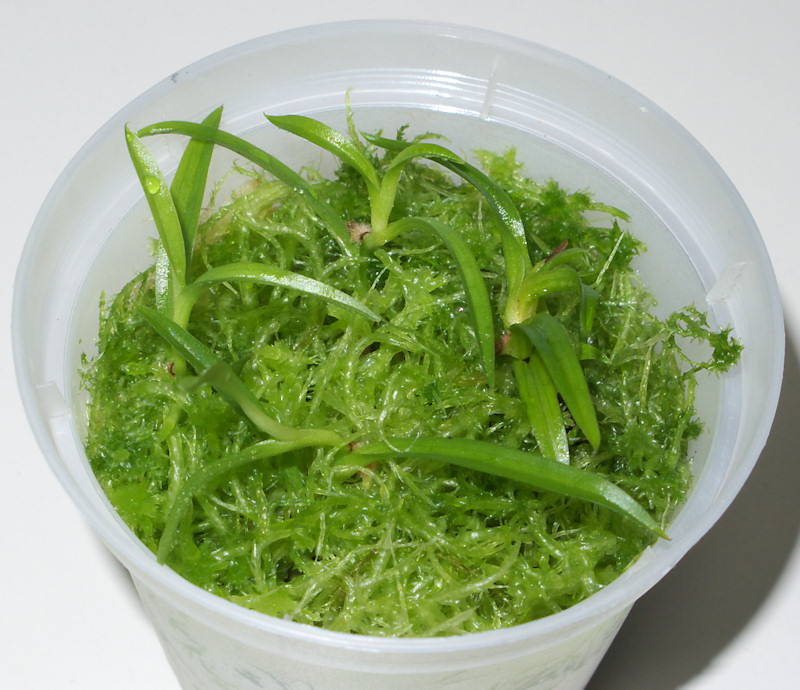 Good to know some mosses are more tolerant of fertilizer than others! For those using 'garden' moss, how do you add it to pots? Add actively growing sheets of it on top of the media, sprinkle live or dried moss over the top or mix throughout? I've had good luck sprinkling dormant/dried out native mosses around a water garden and getting it started where I wanted it, so I'm tempted to take bits of it and crumble it into some pots to see if some will stick here and there and start growing.
E

If you want "garden moss" to grow on stuff, get a fist full, stick it in the blender with buttermilk or beer, blend, then spray or paint where you want it. It might take a couple months, but eventually you'll get some as long as the area is shaded and moist. You can also do a clay pot covered with it- soak a clay pot in good water (RO, DI, rain) then paint the moss on per above then keep the pot moist by either sticking it in a mostly closed bag in shade or keep it in a shallow pool of water. Looks really awesome once it get sgoing.
M

Ernie, what's the reasoning behind the buttermilk or beer? Do they help to feed the mosses or stick them to the surface, or do you just like drinking the leftovers? LOL

they offer this stuff too now...
http://www.mossmilkshake.com/home.php
K

Very awesome thread! Thanks! I grow sphagnum too, and it's really cool. I haven't tried Paphs in it, but I want to try Phrags. I don't grow my CPs in it, because it just grows too fast and overtakes the plants! I propogate mine by chopping it up into tiny bits and sprinkling it on wherever you want it to grow. I haven't tried the blender method, but I might, to see how it works.

I've been thinking about mixing some moss in with crushed oak leaves and adding it to a mix. This is an interesting thread.
E

Mrs. Paph said:
Ernie, what's the reasoning behind the buttermilk or beer? Do they help to feed the mosses or stick them to the surface, or do you just like drinking the leftovers? LOL
Click to expand...

No idea, actually. Must provide some nutrients to encourage growth or gemination. It works though. Proportions don't matter, I like a little on the thick side to make it stick where I put it a bit.
N

Somebody send me some live moss! No bugs though!!