So, I repotted a bunch of paphs over the weekend.

I never get certain things and this always happens when I repot.
Usually things are in ok to good conditions.
Then there are big surprises, which give me worry on some and relief on others.

I had this leucochilum purchased in January.
It was from the same vendor I got my very first leuco from a little over two years ago. This thing came with the base of the plant exposed.
Two growths, nice looking. At the base, I saw two new roots wanting to grow out, but they never made it due to dry air in the indoor conditions. This is very common and I normally cover them up to help.

I delayed and delayed, then the plant started to yellow the bottom leaves and the leaves were getting slightly soft although it's been wee-watered.
I thought root rot. but then I paid good money for it, so I decided to finally have a look.
Well, this thing had tons of fat hairy brown roots with two actively growing ends among them! I was relieved that it is alive and well down there obvisouly, but left wondering why the hell the leaves are getting soft.
Oh, well...

Another big surprise, a bad one.
I have been nursing Woessner Favourite (hang x leucochilum) in the last 17 months. It has been growing very well.
Same thing about this guy, it had its base rather exposed, potted in tiny pot, leaving no space for me to put extra potting material to cover up the base, which has been trying to root out. I should have made the move earlier.
The above the ground portion looks amazing! It has grown very well, more than doubled in size, great color, a brand new leaf is emerging.
Then, when I took it out of its pot, oh, my heck! three fat dead roots fell off, and only one very very long root attached to the plant. no growing tip, either. Also, where the root attach to the plant base was so thin and weak (as is the case for certain paphs) I was very careful not to accidentally break it off.
I managed to pot it up in a larger pot with the base of the plant covered.
I hope the base will start rooting out soon.
I really want to see it flower. One of my very anticipated one actually. so I'm quite worried.
Now, I don't understand what happened to the root as I have been watering this guy very sparingly not to kill off the roots.


Now, at least two of my five Fumi's Delight is doing well sending out stolons.
This one was a surprise this morning as I picked up the pot. I swear I didn't see it the other day! 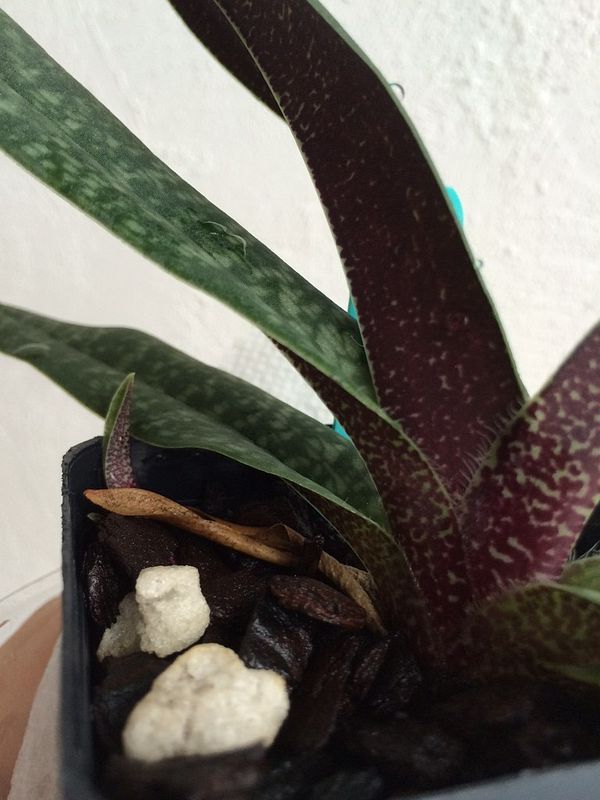 Maybe the Wossner Favorite has been getting too little water?

I don't think so.
but then, too little won't rot the roots.
I've never killed anything with underwatering, and I hardly every underwater plants.

Possibly some kind of root eating pathogens, too.

Getting to that point with my collection.

I started repotting and found some small invertabrates (about 1mm long, multi leg, brown with soft shell on top). Roots appear fine but the bugs appear to be breaking down my mixed media at a faster rate. Ive found more in mixes with chc but they are in some of my bark mixes as well.

Surprises continue today.
An active neo with less roots than expected, inactive ones with massive roots,,,then more single root ( but with actively growing tips at least) paph seedlings. These are pushing a new leaf on top of already having quite a few, so rather puzzling how they like to have just one long root.

Some more to do tomorrow and pretty much done for this year.

You want no surprises? Repot annually.

That's over generalization as there are other factors affecting root conditions. And please note that I did not mean just negative things by "surprises".

I know people who over water and kill plants in much less than a year for example. They never have anything to repot. lol

Another example, I rarely repot annually. Certain things like brachy and bull dog hybrids always have tons of roots although I repot them in 3-4 years.
More example, some of the plants with single roots in this original post were last repotted about one year ago. I got them from someone after they had been repotted. I decided to repot because the height of the pot was not the right fit.
Then the single root under very actively growing nice plant, which was a surprise to me.

You can't always get what you want

Something that I have never seen!