Hello ST Community. It has been just about a year since I first set up my tanks to grow my orchids and I wanted to give everyone an update on how everything has been going.

Overall everything has been growing pretty well. The Paphiopedilum tank was apparently blessed by the orchid deities, I have had zero issues with that tank, including pests! fingers crossed it continues

My Maudie (Paphiopedilum Fred's Enchantment) put out 3 new growths since last year (was slightly concerned at the time) and a new flower (pictured below) The flower lasted over a month! but is now declining
The Jewel Orchid (Ludisia Discolor) has grown like crazy, I unfortunately do not have space to repot it so its going to stay as is.
The Sanderianum and Rothschildianum both had a growth spurt towards the inception of the grow tanks, but they have since plateaued, but growing slowly and consistently.
The liemianum is growing ever so slowly and I have doubts that the new growth will ever reach blooming size (Which I believe is a trend seen by other growers?)
The air plants, various tillandsias are all growing well- and the bulbosa flowered earlier this year- hoping for a new growth soon.
Sphagnum moss kinda took- without most of it dying at the beginning, but is starting to fill back out. And apparently there were fern spores in the moss, which I honestly am not complaining about- I think it gives the tank a very nice look.
There is a Hoya carnosa in there someplace- but honestly haven't seen it in awhile. oops. 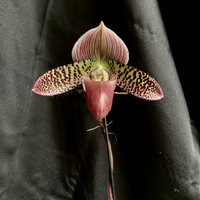 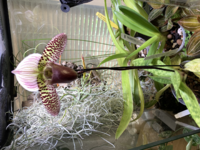 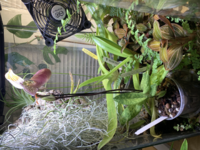 The second tank (high light tank)
The Cattleya Dowiana (what the entire tank is designed around keeping alive and happy) has grown really nicely. It put out a new growth and is the largest growth on the already blooming sized plant (at least I believe it so to be). And just put out a new growth on the opposite side (it did have three leads when I got it, but only two new growths this year). And as pictured below the root system has gone crazy. I have decided to just let it do whatever it wants. Most of the roots have buried themselves in the pebbles of the "false bottom" and are constantly moist beneath the rocks. However I am assuming because the roots have grown into those condition they adapted to be able to take the constant moisture. The roots are also so far away from the actual media that contains the plant- so I am not too concerned about rot, however I do keep a [constant] eye on it. 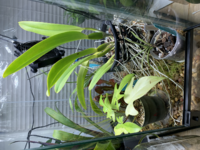 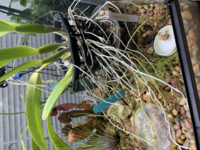 I just moved my Cycnoches Warscewiczii back into the tank (in way back) , it was being isolated for pests.
Speaking of pests- the two Dendrobiums (Victoria Reginae and Gatton Sunray) were removed and treated for pests. The tank was also too bright for the VR so she lives outside of the tanks along with the GS. They both did not take to well to my (probably way to aggressive approach to handling mites at the time) but they have both treated me to multiple keikis and a new growth on the Gatton Sunray.
The Neofinetia (Vanda! ) falcata has put out a new growth and is forming a flower spike(?) in-between its leaves also pictured below.
The carnivorous plants (purple pitcher and Pingicula) are all doing well- just a couple of weeks ago the ping put out three flowers for me!
The other plant- Philodendron Florida Ghost is actually bring moved to grow under some blurple lights for the time being to see if that helps to improve its "variegation" 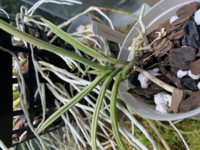 I know this wasn't all about orchids- and specifically Paphiopedilums but I thought it would give the whole breakdown haha. Also sorry some of the pictures are sideways- wish I knew how to fix it!
And here is a link to the original post from last year for comparison
winter-orchid-growing-set-up-grow-tanks.50751

Forgot to put this, but I am struggling with temperature control for the high light tank- specifically getting that diurnal temperature needed for dowiana to bloom- but also not trying to overcomplicate things- may move it into my bedroom so it can get some AC at night