I'd like to get a thread going for a discussion on the taxonomy of Subgenus / Section Cochlopetalum.

I tend to be more interested in the names assigned to the various taxa rather than the rank where they're placed. As I see it, there are six or seven distinct Cochlopetalum taxa, four of which are not really in dispute as to the names:
Paph. glaucophyllum
Paph. moquetteanum
Paph. liemianum
Paph. primulinum (incl. fma. purpurascens)

So what does everyone think the proper names for all of these taxa are? and why?


the first four you mention are fairly clear although I have seen them mixed up by various vendors, and some actually are hybrids.

Victoria-mariae is very unique and is easy to seperate from the others.

The confusion between these plants was due to mis-identification and application of the names previously. Some had victoria-regina and victoria-mariae switched, in my opinion because the names are similar.

Most of the recent taxonomy has clearly seperated the species and dissolved the concept of chamberlainianum.

kalinae was imported shortly before the ban on CITE I paphs, and is closely related to victoria-regina but has very hirsute brachts and slightly different coloration.

I am not a taxonomist (as you can see) but have grown all of these in the past and have seen many examples. Braem and Cribb have pretty much clarified most of the issues although they will never agree on all of them.
P

Well there's some confusion about this group
By memory :
Paph. glaucophyllum easily recognisable by its foliage (i guess)
Paph. moquetteanum is a still considered by Cribb as variety of P. glaucophyllum - the reason is that there are many intermediate forms between the two

Paph. victoria-mariae is quite unique and easy distinguished

I haven't seen the original literature so I tend to follow Cribb regarding the chamberlainianum/victoria-reginae business because the explanation in his book seems more logical than Braem's statements.
victoria-mariae really is a different thing, like Uri and slippertalker said.

What about latifolium? Appears to be a Schlechter name for a variety of chamberlainianum. Is it different and how? I've seen seedlings offered here (as a "new" variety, of course :rollhappy: ), but the vendor couldn't tell me more than that the leaves would be different. And I've seen one huge multi-growth plant which flowers looked like a standard chamberlainianum (or vic-reginae).

It's been a while since I've seen the varieties side by side. Perhaps Jason Fischer could help on this one? The epitaph of latifolium means that the leaf is wider than the norm. As I remember this is a bit more robust with perhaps a slightly larger flower but not a lot of difference from the typical chamberlainianum/victoria-mariae.
D

I have to agree with Guido Braem's classification (from his Paphiopediulum Book by Braem and Chiron). According to Guido this group is classified into the following 7 species:

I don't have time to go into all the differences between the species, but they are mainly differences in the shapes and colors of the flowers. To me each of these entities are distinct species. To me the easiest way to recognize the species is by looking at the dorsal sepal. The dorsal sepal is clearly different for each individual species. Following are some pictures of the above species (sorry I don't have a picture of Paph. kalinae. I have seen it in bloom, and both the flowers and foliage are very different from Paph. chamberlainiunum to which it is probably most closely related). 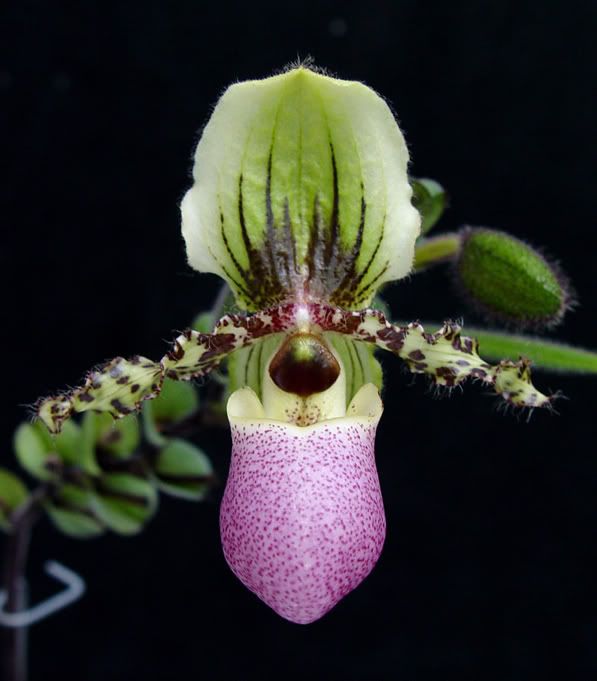 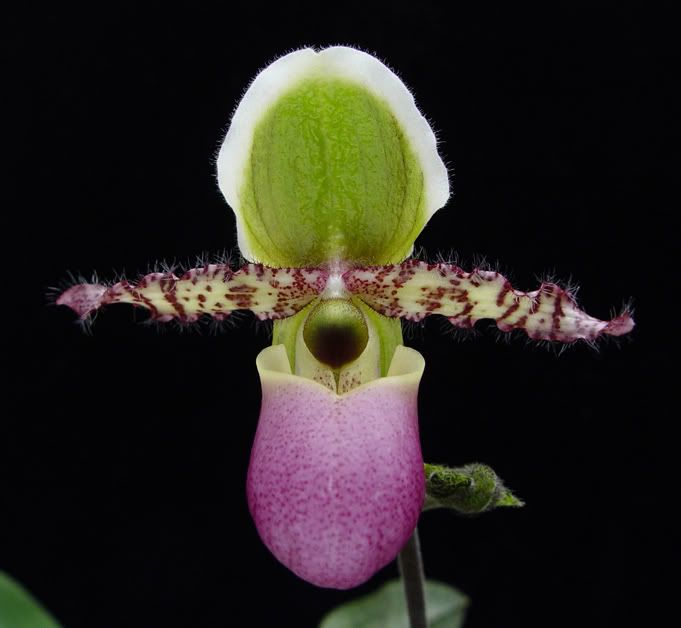 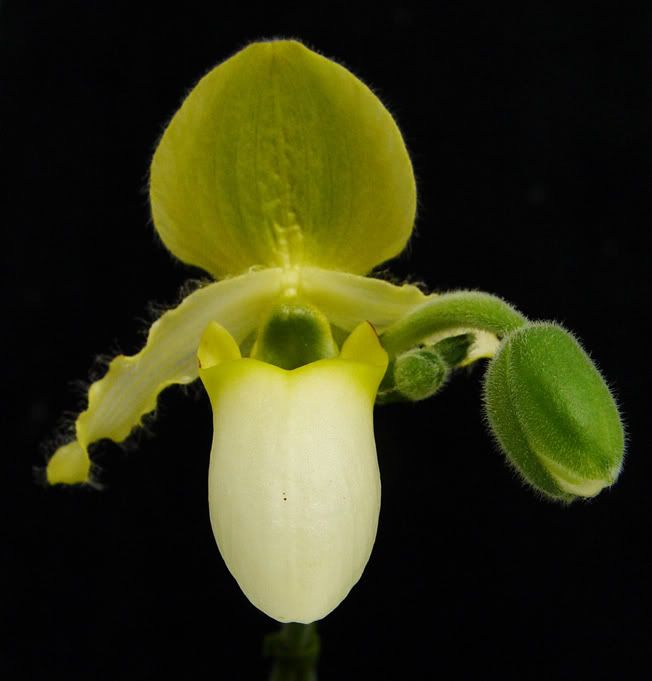 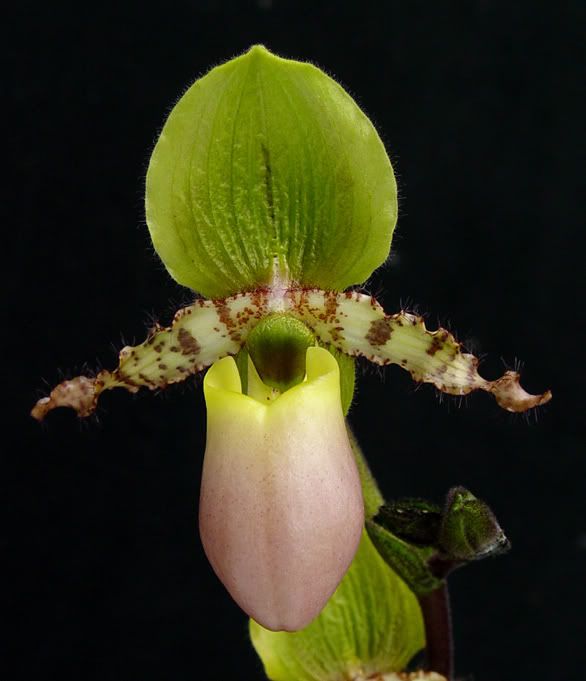 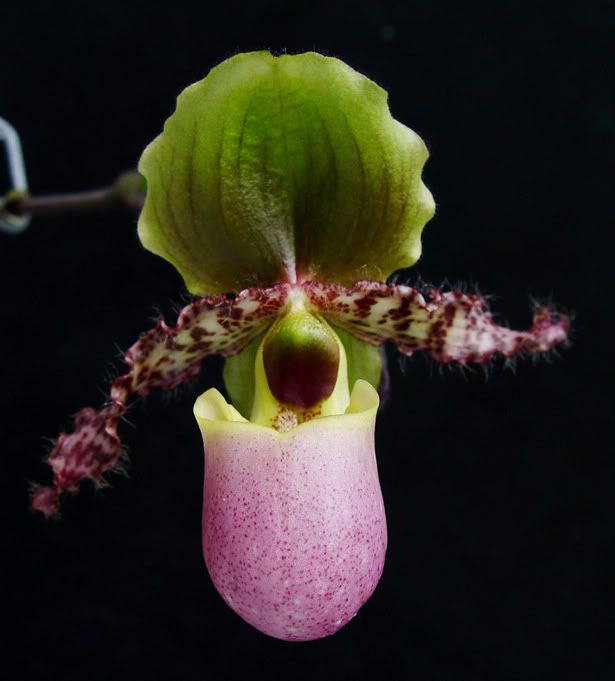 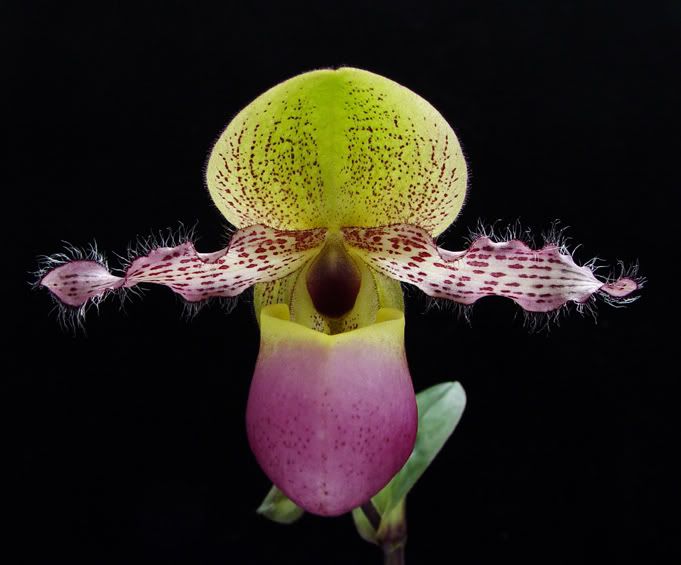 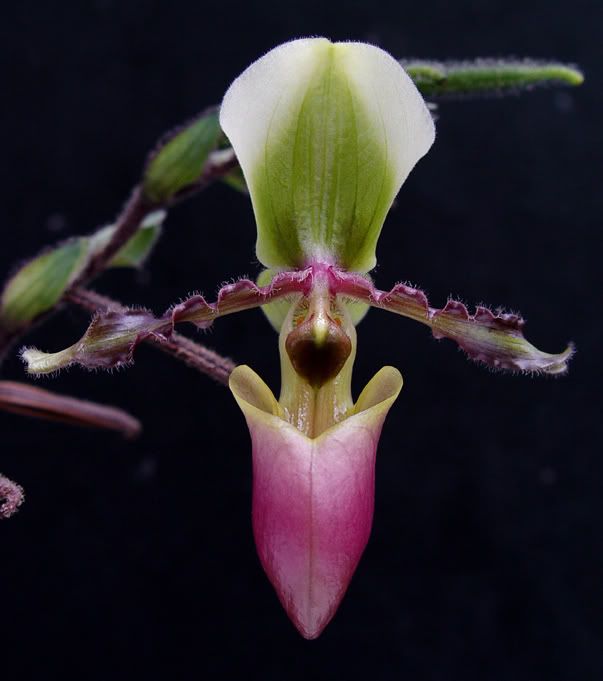 You may have seen Jason's posting on another thread. He put a bunch of the above species together so you can see the differences. Here it is if you have not seen that: 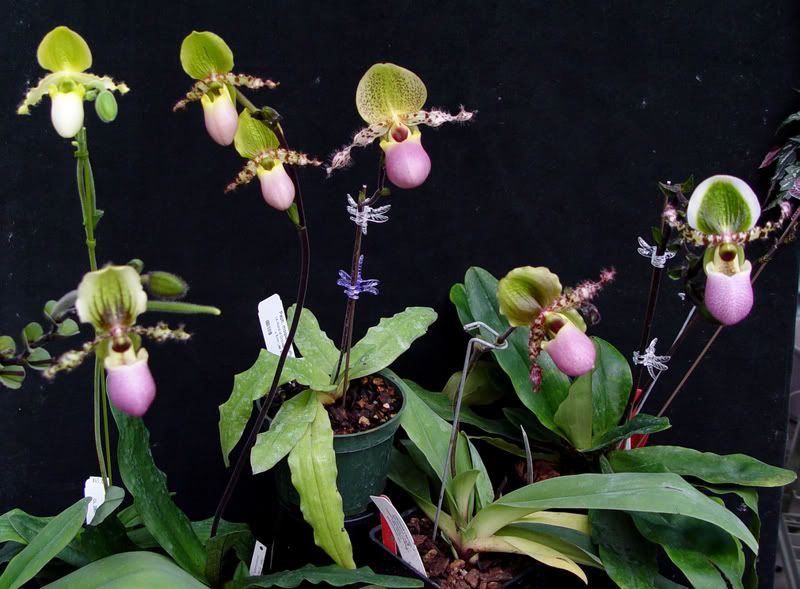 I pretty much agree with that, the primary conflict is regarding whether chamberlainianum or victoria-regina is the correct taxon for that plant. I'll leave it up to the taxonomists who can't agree on everything anytime.

I knew I should have gone with liemianum....
D

I prefer calling it Paph. chamberlainianum, but that is just my personal opinion. If you read Guido Braem's book, he goes into the debate of chamberlainianum versus victoria-regina.

According to Braem, both species were mentioned for the first time simultanously in an advertisement from Sander in the Gardeners Chronicle on Feb 13 1892. Both had a description of the flowers. A week after the first advertismement there was another ad in the Garderners Chronicle giving an even more extensive description of Paph. chamberlainianum. Both species were collected by the same collector Micholitz. According to Braem Micholitz was experienced enough that he would distinguish them as being 2 distinct species. Also Sander would not advertise them as two distinct species if they were actually the same species.

This is much like the confusion over paph rothschildianum and paph elliotianum; certain plants were very closely related, a lost concept, or there were two names for the same plant. Similar is superbiens vs curtisii argument.

I know of three different arguments for the names of the two species. They revolve around the identities of the plants that Sander was talking about in his various publications. Micholitz had collected 2,000 plants for Sander in late 1891 of what he said were two different species, one with a spotted lip and one without. Sander placed an ad announcing their sale and describing them in the February 14, 1892 Gardeners' Chronicle. In the February 20, 1892 Gardeners' Chronicle, he placed another ad announcing that all the examples of Paph. victoria-regina had died en route, but 700 chamberlainianum plants would be available for sale. He also included a more detailed description of chamberlainianum.

Cribb (1998) argues that the short description by Sander of chamberlainianum in the February 14, 1892 ad should be considered 'inadequate for valid description'. He also argues that Sander was lying when he said that the plants of victoria-regina had died en route and what he was really doing was covering up the fact that there was only one species. He then accepts victoria-regina and victoria-mariae as the names for the two species. He says that Micholitz's letters to Sander support this, but doesn't provide any examples or note the specific dates of the letters he is referring to. Cribb's arguments are unconvincing.

Braem & Chiron (2003) argue that there's no reason to exclude the name chamberlainianum based on an inadequate description. It wasn't extensive, but it certainly qualified as valid for the time. They argue that the name victoria-regina, though, falls into the same category as glanduliferum, a taxon that is without sufficient information to be used. The taxon victoria-mariae is used for the plant shown by Sander to the RHS in 1893.

Of all the arguments, I agree with Robert that Braem's is the most reasonable and convincing. However, I haven't yet seen copies of Micholitz's letters to Sander, which may provide a better perspective on what was really going on.

Good Information! :clap: :clap: :clap: After I read that I have to agree with Guido's argument that the proper name of this taxon is Paph. chamberlainianum. Yes it would be interesting to read Micholitz's letters to Sander. I wonder if they still exist, and where they would be?

Luckily at least some of the Micholitz-Sander correspondence still exists and is in the archives at Kew. I'm thinking of ordering copies since going to London isn't really an option for me at the moment. (but is on my must-visit-eventually list)

I'd really love to see the original ads and also the correspondence between Micholitz and Sander.

Cribb, in his book, mentions that Micholitz wrote to Sander only about one species. When Braem implies two species from the correspondence (I only own his 1988 book that has no details), are we talking about different letters here or a bad handwriting? If Micholitz announced one species to Sander and Sander advertised two, one of Sanders two names would be a classical nomen nudum, wouldn't it?
Cribb also cites the description of chamberlainianum in his book, and that really is quite sketchy, and suspicous because vic-regina was described in detail in the same ad.
The argument Cribb has with the extensive description of chamberlainianum one week later is, that it appears to be copy-paste from that of vic-reginae one week earlier. Again, before making up my mind I'd like to read the originals first.

The Bacteriological Code has rules for treatment of ambiguous, doubtful or confusing names; they may be placed on a list of rejected names and shouldn't be used. Are there similar rules in the Botanical Code, and wouldn't you agree that a proposal to reject one of the two names, chamberlainianum or victoria-regina, would be helpful to solve this matter? Of course, that wouldn't stop these names from turning up in trade all the time.