I have a huge interest in this section and have, to date, a decent collection of the different species and wanted to share some thoughts/observations and would love feedback. Please feel free to attach your pictures to this thread too.
First off I am no taxonomist nor would I ever call myself an expert - I love to learn and have been growing Paphiopedilum for about 35 years. 8 of those years ('94-2002) I was the grower for Mrs. Ralph Levy (clonal name 'Magnifico') and what an opportunity to be introduced and grow almost every species of Paphiopedilum in cultivation, at the time. Mrs. Levy acquired a huge collection and I learned a lot in conversations with Dr. Leslie Garay who was a friend of Mrs. Levy.

My confusion is with two "species":
I grow 5 examples of Paph. "liemianum" with whitish mottled foliage that came from several different sources as Paph. liemianum. Two are blooming and I had shared them with ST about a year ago. @Bob in Albany N.Y. had posted some pics of his plant several years ago and recently I asked him if he had bloomed it but he responded that "it was no longer with him". Paph liemianum var spotted leaves . Below are pics of the two that are blooming for me and shots of the upper and underside of the leaves. After the description of Paph. dodyanum was published I was excited to see that the leaves were identical of dodyanum to the "liemianum" mottled leaf plants I grow and other ST members suggested in Bob's & my own pic threads that these might be dodyanum. Vegetatively in pics they do look the same, however the dorsal sepal in most of the pics of dodyanum resemble Paph. moquettianum with spotting and the dorsal sepals in the pics below resemble more liemianum or even glaucophyllum. There are some pics of dodyanum I found on the internet that show flowers similar to those below (no spotting like moquettianum) with the same whitish mottled leaves as in those plants I grow.
Also, there are no ciliate hairs along the edge of the leaves of these "liemianum" plants as described in liemianum but they are heavily spotted underneath as in liemianum. Aren't the ciliate hairs on the leaves of liemianum a diagnostic feature for the species along with the spotting? The leaf edges of these "whitish mottled leaved" plants seem to be finely dentate.
The other 3 plants I grow have not bloomed yet, but are identical to those that are blooming in leaf, so it will be interesting to see the differences in flowers compared to the those currently flowering. Big question is will they bloom similar to those of dodyanum with dorsal sepals that resemble moquettianum?
Interestingly, I have tried three time to self the darker clone with no result and a sibling cross with the other clone which also failed. 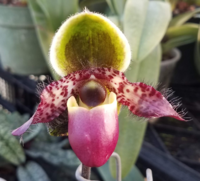 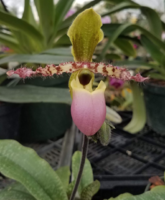 Here are 2 liemianum with yellow mottled leaves that were sourced from Orchids by Hausermann. Admittedly, they have not flowered yet to identify accurately so I'm trusting the source for now but they are heavily spotted underneath and do have fine ciliate hairs along the leaf margin. The larger of the 2 should bloom in about a year so will follow up this post with more pics.

The other confusing plant came from Orchids Limited as Paph. chamberlainianum/liemianum (with yellow mottled leaves). Their description: "Possibly a new form of a Sumatran species? This form was seen many years ago and collected and shipped world wide as early as the late 1970's to early 1980's and then it disappeared. These plants were raised from seed and are now flowering size. Sequential bloomers often flowering for longer than two years on a single stem." Anyone have ideas where Orchid's Limited got these? Paph. chamberlainianum/liemianum
Did anyone else purchase one of these and have it flowering? Please share a pic!! There is a gentleman on Facebook that recently posted pictures of his plant and cited the description from Orchids Limited including complaining of the exorbitant price he paid. LOL! Slipper Orchids Australia: Paphiopedilum - Phragmipedium - Cypripedium & o In the background of his pics I see the familiar yellow mottled leaves similar to the plant I grow.
I can't help but see the similarities of the flower's dorsal sepal of this plant (yellow mottled leaves) to those of the flowers shown above of the "liemianum" (whitish mottled leaves), however there is only a small amount of purple spotting at the base of the this plant. Unlike the real chamberlainianum/victoria reginae, the true name not part of this conversation, there are spots rather than a flush of purple color at the base of the plant and most telling there are no dark lines in the dorsal sepal of the flower. Also, to rule out liemianum there are no ciliate hairs along the leaf margin and no heavy purple patterning on the leaf undersides.
I recently self pollinated this plant. It will be interesting to see seedlings from this flower. Will they be similar to their parent? Will they show mottled leaves? Will they show hybrid variation?

Here is a first blooming seedling pic of victoria reginae that is flowering for me:

I know my observations are only based on a few plants I grow so that's why I'm reaching out, but how can we explain all of this excluding the notion that these are hybrids among the different species? Truly a conundrum! Would love to hear any observations you all have especially if you are growing these same plants.
Last edited: Mar 28, 2021

Naming of Paph. anitum progeny on the RHS app

What is causing my leaves to die off prematurely