in Leesburg, Va. A few days ago I went to visit some relatives in Maryland near D.C., and decided to stop in at Als Orchid Greenhouse. I used to live in Leesburg back in late '90's but didn't know about his greenhouse before I moved back to upstate ny so never got to visit. I've purchased lots of plants from him that have been excellent. I saw some pretty cool things so thought to take some pics and share them with you. I was using iphone and it was very cloudy and dark, and his greenhouse looks just like a rainforest with lots of other non-orchids around as well.

in the middle of the greenhouse, Al has this living wall and enclosure which
has circulating water and misters. there were several orchids in the mix of
plants but too difficult to get good pics of them 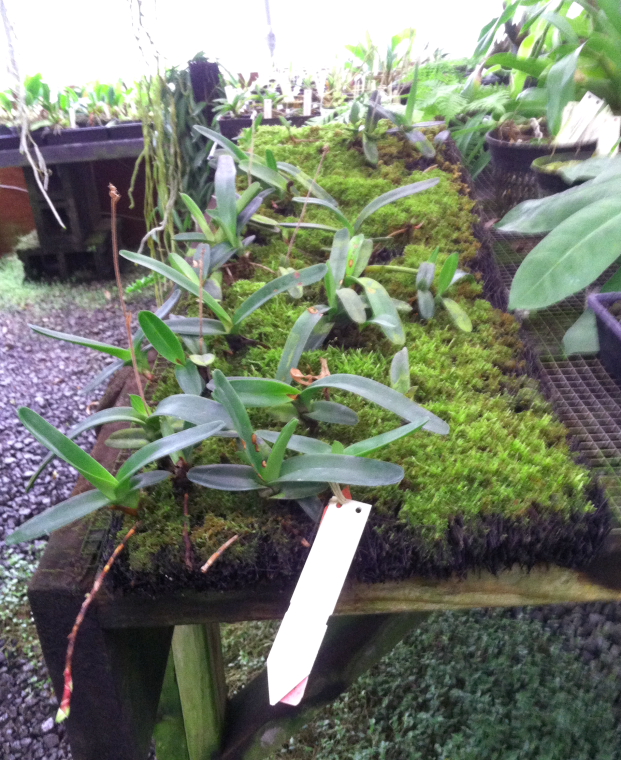 here was a totally unexpected sight - mexipedium xerophyticum growing
on a huge slab of thick tree fern! it was in a damp and shady spot (like
most of everything) and had 36 mature growths and around 16 new shoots.
there was a thick layer of moss over the top and it looked pretty happy for
the most part

one of the larger phal giganteas in flower

this mass of roots is 'one' phal wilsonii plant (or one of the
other chinese type phals. I searched the mount and it indeed
was just one plant!

on one high bench there were around 7 bonsai

a dend. hybrid with some cuthbertsonii and laevifolium albas, possibly den. Illusion

I left after looking everything over three or four times with a compot of two phal cochlearis, a nicely sized phal maculata (there were compots also) and a seedling phal philippinense with a tiny flower spike that may likely blast. There were lots of things I also would have loved to take home, but needed to keep some for the Woodstream open house and the NJOS show in a few weeks
B

Wonderful pics! I had heard of Al's and never ordered. But Inci gave me some Catts this summer that came from Al's and now I am hooked! I've ordered about three times and can hardly wait for spring.
M

Looks like a fabulous greenhouse to visit. Thanks for sharing these pictures.

bullsie said:
Wonderful pics! I had heard of Al's and never ordered. But Inci gave me some Catts this summer that came from Al's and now I am hooked! I've ordered about three times and can hardly wait for spring.
Click to expand...

there were a few pots of a peach colored catt hybrid that I really wanted to take home, and while I was looking at everything else someone agreed with me as I saw them carrying one to the cash register . it was too big for my new space and there were somewhat rare or unavailable phal species that would go home first

he also had a nice collection of neofinetia falcata clones for sale, nicely potted in the japanese style
C

That Ludesia is poppin!!!
N

Thanks for sharing, love the Ludisia and the cool way to handle the ramblin' Mexipedium.
L

I keep meaning to visit Al's greenhouse. Leesburg is just a little over an hour away. Al sometimes sells at the NCOS show and PF.

Great pics thanks for sharing
A

Thank you sooo much for this breath of the jungle in January. Made me
feel warm just looking at the photos.

Cool plants Charles, but the Ludisia is terrible !!!! Jean

Well yes it was pretty dark and I hadn't noticed the pics were shaky. There were two other really cool things I took pictures of that didn't turn out.

I visited there a few years back and it is a cool place. Thanks for sharing!