Okie, just like my Vanda roxburghii pics, I finally got them...

Paphiopedilum praestans is a very uncommon species in the US, primarily because of confusion with the species and close looking hybrids, which may contain 'praestans' parentage, and may not... so here is the true Paph. praestans to refer to. It only produced a single flower this year, I accidentally bumped off one bud, but it's ill performance makes me want to work on this plant more and more to produce some better results. Okie, enough jabber...

These are the smaller pics, and under the pics is the URL reference to the high-resolution pics of the coinciding picture. 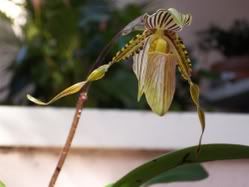 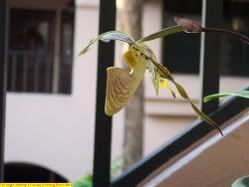 This is to show the staminodial shield and its angle, which is another way of identifying the phonies from the true species... click the URL to get a better pic for a clearer identification...

A good one. Hopefully next time it will have more flowers for you.
M

A favorite of mine as well, though it's nothing to showy this year... =(

(The Vanda pic, the top of the plant is cut off because it was too large!)

Hope this helps those who need a positive identification on the "Paph. praestans" out there for sale...

What hybrid has been passed off as praestans? This is the first I've heard of this.

Jon in SW Ohio said:
What hybrid has been passed off as praestans? This is the first I've heard of this.

Pat, did you mean hybrid (I didn't see mention of that but might have missed it) or just the whole praestans/wilhelminae group mess?
M

You must be very good, I've seen hundreds of these plants in flower, including the phenotypic variation in collected plants, and would not presume to make such a call based on a 72ppi image.

I'm just trying to think of a single hybrid that would be confused with praestans or wilhelminae. Would love to see pics.

I must apparently be better then good =) Paph. wilhelminiae (which was considered a variety of Paph. praestans) is in a few hybrids, I am unsure as to the names... I am unsure as to where all these "Paph. praestans" were on the internet, a member to this forum had asked me about the Paph. praestans, and started showing me site after site, and we weeded through them and discussed the species and general morphology of the flowers on each site... most were non-praestans plants listed as P. praestans, while very few were the true species... many were for sale, some were to be used as references and identification photos for the species... the species is primarily uncommon in the US because of the mix ups, which I have seen before, as this, along with the other realted species, is of high interest with me... I only have only a couple true Paph. praestans... the others, I dunno what they were, they were fakes...

I must ask, where in the world did you see hundreds of Paph. praestans in bloom?

This is my Paph praestans, would it be considered to be representative of the true species? 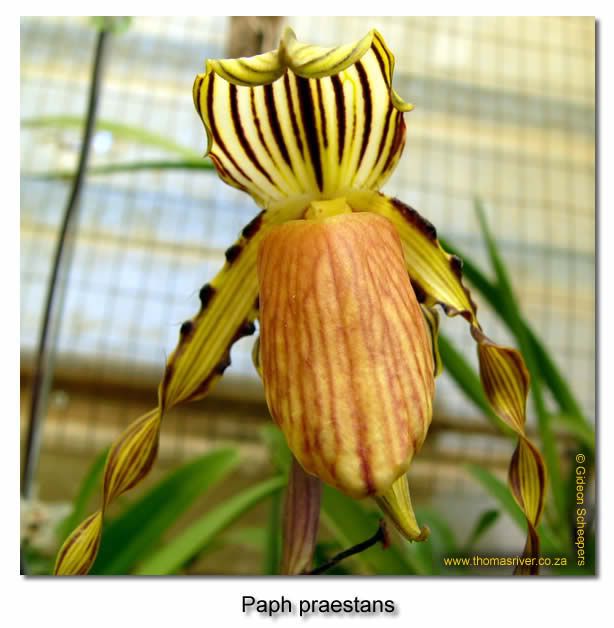 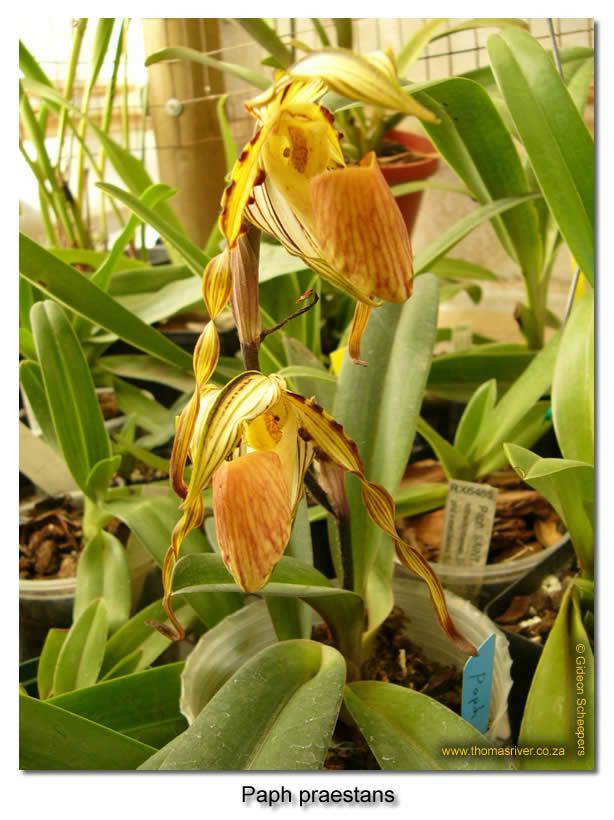 Mahon said:
I must ask, where in the world did you see hundreds of Paph. praestans in bloom?
Click to expand...

:rollhappy: :rollhappy:
Ever heard of Candor Orchids or AnTec Labs? 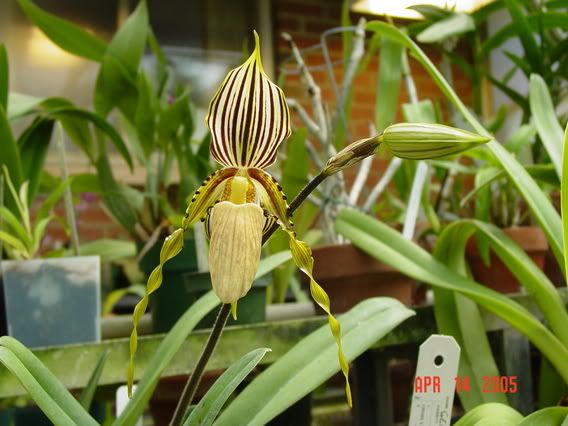 Mahon said:
I must apparently be better then good...

I must ask, where in the world did you see hundreds of Paph. praestans in bloom?

I have learned in these sorts of circumstances, that Google can be an invaluable friend when you aren't sure who you might be talking to in the greater orchid world.

What descriptions/analyses are everyone working from?

I thought taxonomists generally rejected Garay's use of staminodes as diagnostic in the Paph. glanduliferum complex because the character is extremely variable?

Here's my attack angle at the situation... I was introduced to many Paph. plants being sold as "Paph. praestans" on the internet, which were not P. praestans at all... the main thing I look for in true Paph. praestans is the green stripes on the back of the sepals and being raised, which is not found in any other species in the Glanduliferum Complex that I am aware of besides Paph. glanduliferum itself... if I am wrong, please correct me and I will be correcting some labels...

Here are some observations upon all of my P. praestans that have bloomed... they all have purple or green bloom sheaths striped with black, and do not wilt until after the flower wilts (which is most likely an unimportant observation)... the leaves are very succulent and have a distinct fold in the center... the inflorescence is purple, and not green... the dorsal sepal is equal in length as the other, and are usually cupped (though this could be a very variable occurance by selctive breeding...)

Steve, are there any other ways to identify positively species of the Glanduliferum Complex? Thanks for your help, where did you come back from?

I get the impression that taxonomists generally accept two taxa, P. glanduliferum/praestans and P. wilhelminiae.

One question is whether or not glanduliferum = praestans (e.g. Cribb 1998) or glanduliferum is a 'lost' species and praestans is the currently grown species (e.g. Braem 2003). I tend to agree with the glanduliferum and praestans are different opinion. Although, I have seen a pic of a wild-collected praestans with a pale-but-still-striped dorsal sepal that might indicate they are conspecific and just at two ends of the spectrum of variation within the species.

As to P. bodegomii, status is easy. It was never formally described and no type specimen has been found so it can be regarded as a trade name only.

P. gardineri was published n 1886 with the type being a poor line drawing. It lacks enough detail to even begin to distinguish between the species, so most authors consider it invalid. Garay (1995) in using staminodes to distinguish between the species, does consider P. gardineri to be valid. I have never heard anyone remark favorably about Garay's analysis. In the trade, it seems that most of the time that I see P. gardineri offered, it is P. wilhelminiae that is really being sold.

There is also a significant geographical difference between the habitats of the two species. P. praestans is found in northwest New Guinea and its adjacent islands, whereas P. wilhelminiae is found in the mountain chains of central New Guinea. (http://www.slipperorchids.info/paphdatasheets/mappoly.jpg)

I have also heard of the presence and number of warts near the base of the petals being used to distinguish P. praestans and P. wilhelminiae, but I haven't noticed a significant enough difference in my limited experience to find them diagnostically useful. I don't know anything about the differences in the raising of the stripes on the sepals, as I have never looked for it when looking at blooms. I will have to remember to do so the next time I see a member of this complex.

I think this is one of the Paph species complexes that is most desperately in need of field studies. I don't think anything can be said for certain about this complex until more extensive work has been done in situ examining the natural variation of the species.

I was in Capon Springs, WV at a tiny resort for an annual family reunion. A week of golf and sitting around. It's a rough life, but someone's gotta do it...