I keep my Paphiopedilum collection modest sized, trying to have excellent examples of a few types that I like, including a red/spotted complex. Although there are many red/spotted crosses available, it is not easy to get an outstanding one. The above plant was selected for me by Jerry Fischer at Orchids Limited after he screened a new group of first-bloom plants. I believe these were bred overseas but think plants from Terry Root’s Orchid Zone featured prominently in the breeding.

I received the plant in February 2020 as the single first flower was fading. The growth of the plant was excellent this last year. Bud development began the beginning of October 2020. The bud seemed very large early on and then looked unusual. Finally, it became obvious that two buds were growing. I didn’t think of this as necessarily bad, but once the first flower was opening, I saw that it hadn’t been a good thing. The secondary bud had indented the inferior pouch of the first bloom and rolled up the lower margins of the petals. The second bud is now growing out to the side. Here is a picture. 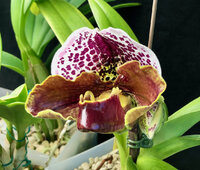 Because there is strong new growth and excellent roots on this plant, I am going to let the second flower develop fully to see what happens. I am expecting it to be a smaller flower.

Reading quickly about the dozen or so species that make up this complex hybrid, I find that almost all are usually single flowered, but some can occasionally have two flowers. I don’t know if there are cultural factors that augmented the production of two flowers this time. I would rather have just one, large, well-formed flower.

I would be interested in your thoughts and experience about cultural factors that might be causing a second flower to develop. If it is all genetics, I am probably stuck.

i think its mostly random. I remove the second bud early.

Terry, although this kind of flower might not go hand in hand with my personal preferences, I can still recognize a good flower when I see one - and also appreciate what you see in it!
As well as recognize the good culture, that brought it to the fine flowering.
In species a double, sometimes a triple flowering, in normally one flowered species, might be genetically based, but will only express itself with good culture. And I would take pride in two well formed, nicely sized such flowers! If the two flowers do not flower simultaneously, I have one or two times experienced that the second flower was the better one.
However if your priority is one good flower, I find Ozpaph's proposal sound!

I don’t think I could have physically removed either of the blooms with a knife early on because I couldn’t have seen the surgical cut plane! The second bloom is now nicely separated from the first so I may cut off the first, deformed bloom to put all resources into the second bloom.