"According to Sancai Tuhui (a Chinese encyclopedia), Fûran grows w/o soil. It is placed in a small basket and then on a tree. People call this Sen Sô (Celestial Herb/Weed). Small flowers have a light fragrance. According to 五雑組 (another Chinese encyclopedia), roots of Fûran never touch soil and mount on trees and rock. People hang this from eaves after collection (from wild). It grows well when breezy. There is no difference between leaves and flowers of this and those of ordinary orchids.

I contemplate that the habitat of Fûran is deep in mountains, and many are found on branches of Torreya nucifera, Abies firma, and such. Leaves look like Rohdea japonica, but small and narrow. The length of leaves are 2~3 inches. An inflorescence will emerge in June, and bear small white flowers. The tip of flower is bent, and has a weak fragrance."

1755 - Ehon No Yamagusa by author Tachibana Yasukuni depicts Fuuran along with other orchids on plate 27. 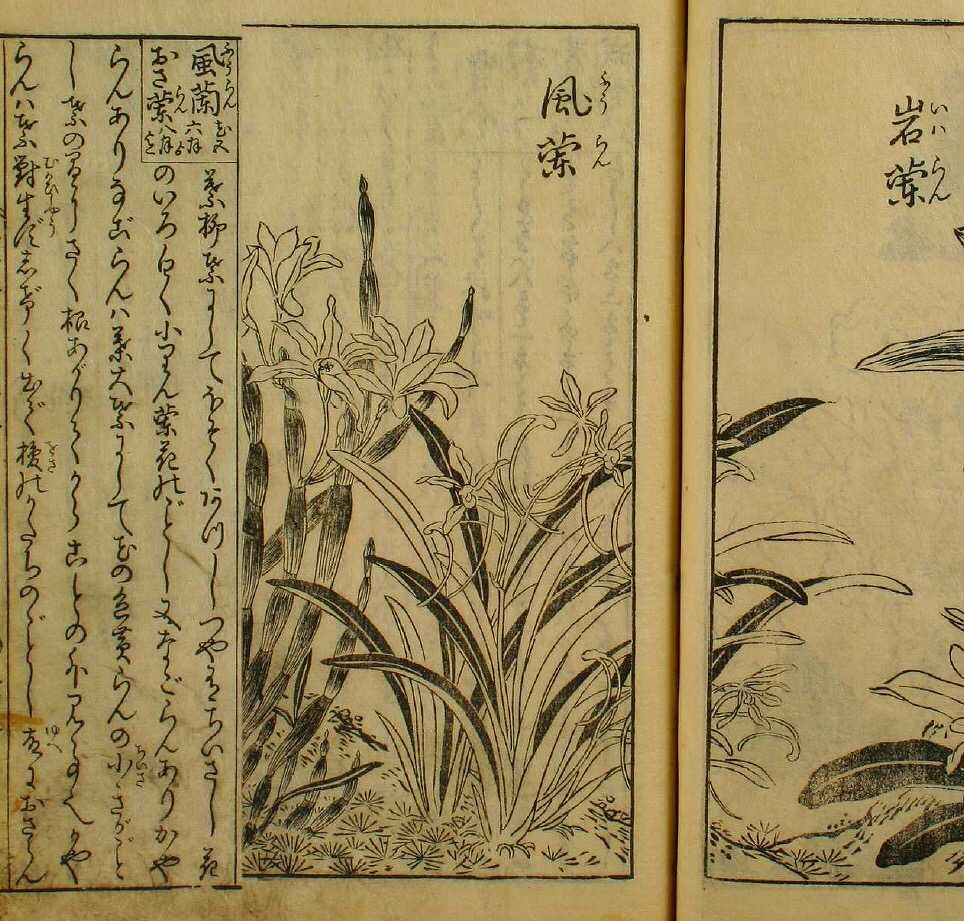 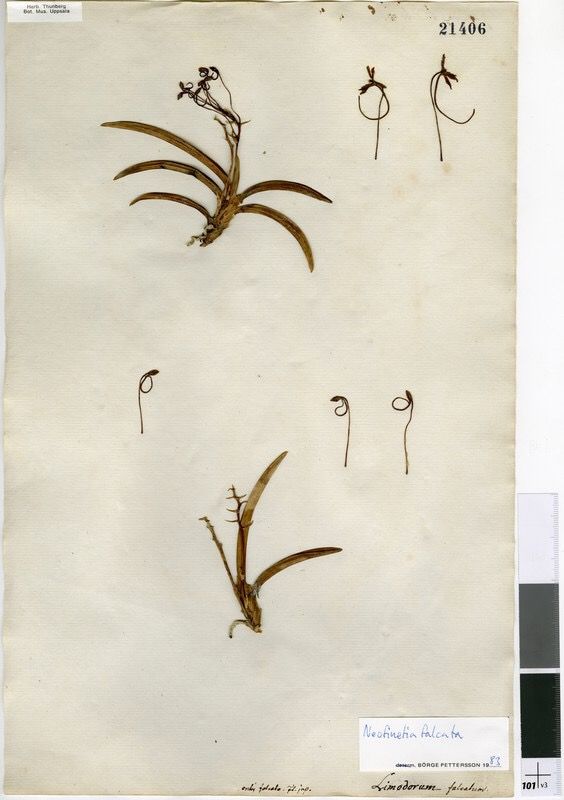 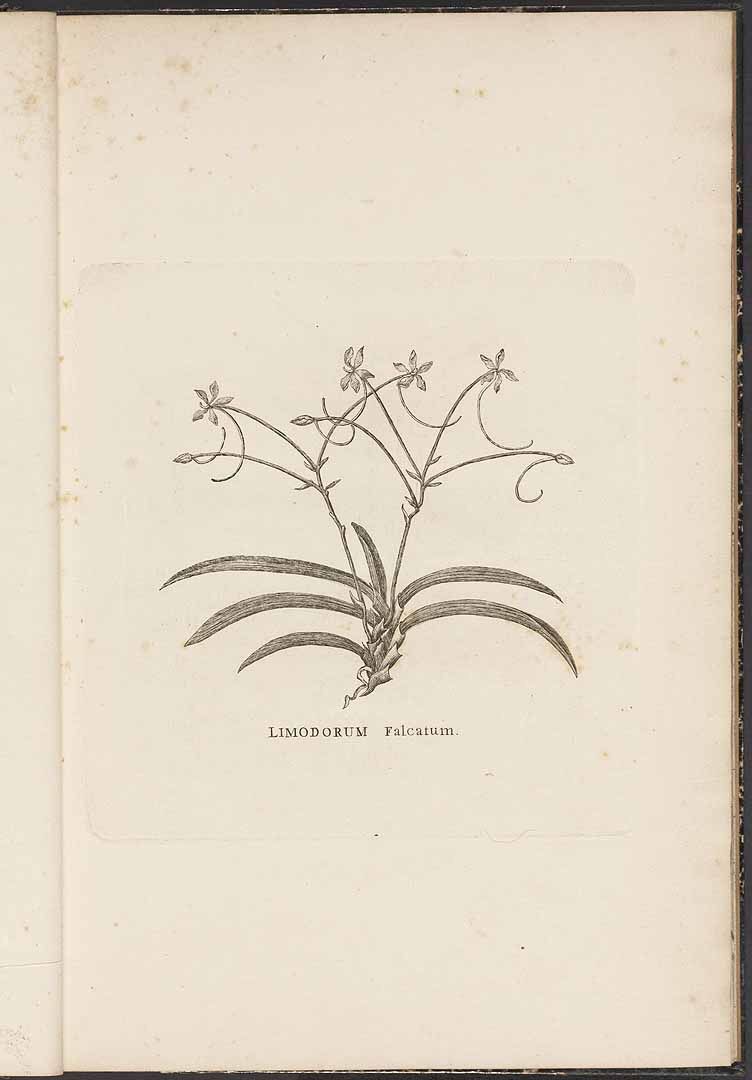 1893 - In the book A Manual of Orchidaceous Plants Cultivated Under Glass in Great Britain Vol. 2 published by Veitch & Sons, the plant is described as Angraecum falcatum.

The unpretending little orchid described above has an exceptional interest attached to it, not only from a scientific point of view on account of its geographical position and from the difficulty experienced by the older botanists in determining its systematic place, but also in a horticultural sense as being the first Angraecum cultivated in the glass-houses of Europe, and one of the earliest of the Japanese orchids ever introduced.

It was detected on the hills near the port of Nagasaki in southern Japan by Thunberg some time between 1773 and 1778.* So little was known at that time of the epiphytal orchids that Thunberg at first referred it to the terrestrial genus Orchis, with which it has but a slender affinity, but subsequently removed it to Limodorum, a monotypic genus widely dispersed over the Mediterranean region, to which it is scarcely more nearly related than to Orchis. In this, however, he was followed by his countryman Swarz, the greatest orchid authority of his time, and doubtless owing to the influence of this authority it was figured both in the Botanical Register (1818) and in the Botanical Magazine (1819) under the name of Limodorum falcatum. Lindley, was the first botanist to bring it under Angrscum, but afterwards removed it to Qiceoclades, a genus which he had founded upon a Brazilian plant previously described and figured as an Aiigraecum,t but now somewhat doubtfully referred to Eulophia; the other species brought by Lindley under (Eceoclades were removed by Eeichenbach to Saccolabium with the exception of the little Japanese plant, our present subject, which he seems to have overlooked. This enlargement of Saccolabium was sanctioned by Bentham, who, however, rightly restores the Japanese plant to the genus in which Lindley first placed it.) That a species of Angraecum should be found in a country so remote from its congeners as Japan, is a phenomenon for which no explanation can be offered.

Angraecum falcatum was first introduced into British gardens by Dr. Roxburgh, who sent plants to Sir Abraham Hume about the year 1813, and by whom they were cultivated in a hot-house in his garden at Wormley Bury, near Cheshunt. It probably became lost to cultivation for a number of years, till it was re-introduced by ourselves and other firms from its native country within the last quarter of a century. Besides the locality in which it was first detected by Thunberg, it has been reported from Kiu-siu and Kin-bo-san.

* Carl Peter Thunberg was a Swedish physician and botanist, a pupil and one of the immediate successors of Linnaeus in the Chair of Botany in the University of Upsal. In 1771 he obtained a situation as surgeon to one of the Dutch East India Company's vessels, and sailed from Amsterdam for the East. He landed at the Cape of Good Hope and made several excursions into the interior, and after having remained at the Cape three winters he sailed in 1773 for Java, and subsequently visited Japan. He returned to his native country in 1779, and published a Flora Japonica in 1784.
t Bot. Reg. t. 618. + Gen. Plant. III. p. 579,

Back in September of 2006, almost ten years ago now, I posted a thread on this forum asking Jason Fischer to come to Slippertalk and discuss Japanese orchids. He shared his wisdom about Neofinetia falcata in several posts. You can see that thread here...

Now it's 2016, and the Neofinetia falcata growing community outside of Japan has continued to grow. There are a few groups on Facebook dedicated to Neofinetia falcata, there is a yearly Fukiran judging contest in California, and there are more varieties available in the U.S. and Canada, and places to purchase those varieties, than ever before.

I stepped away from orchid growing for a few years. Now I am back, and with a few Neofinetia falcata varieties on my shelf, I am reminded why I fell in love with this species in the first place. The thread I posted a link to above is referenced on other forums, by other Neofinetia growers, as a good resource. I want to put together something bigger and better.

I would love some help or suggestions filling this thread. If anyone has links for places to purchase Neofinetia falcata in Canada or Europe, I will list them. We also need links to nurseries in Japan and Korea. I will try to come up with information regarding tsuke and root nomenclature, variety descriptions etc. If anyone wants to help, jump on in.
Last edited: Jul 30, 2016

By the way, did you know the Neo Base website?

Erythrone said:
For Canada, here are 2:

I have heard of Neo Base, but its information is locked behind a registration. This thread will be much more visible, indexed and easily found on a search engine. Plus, it never hurts to have more than one site with info in case one goes down.

Naoki posted a listing of vendors in Japan in the following thread:

Thanks Marco, I'll get those added ASAP. I got signed into Neo-base. It's pretty cool. I still have some more photos and things to add here, and I am going to contribute some to Neo-base too.

I hope you will write an article for Orchids, or Orchid Digest, with all this information.

I love digging up the information, but I'm no expert. It seems like just yesterday Jason wrote his, but that was ten years ago.
L

Time flies! I, too, once grew Neos -- a lot of them! Then I stopped altogether for a few years. Now I'm back, rebuilding my collection and having the time of my life. These are great orchids! I'm so glad to see this thread.

Maybe it's just me but lately it seems like tons of neo folks are getting back after taking a break.
N

Yes, the actions of a certain political party have helped us out of the recession caused by the' Real Estate is a speculative investment' era. Hint: It does not have an Orangutan as its candidate in the next election!
L

NYEric said:
Yes, the actions of a certain political party have helped us out of the recession caused by the' Real Estate is a speculative investment' era. Hint: It does not have an Orangutan as its candidate in the next election!
Click to expand...

True, as Neos can be a pricey hobby, which brings up something else I'd be interested in learning: What do each of you consider to be your most valuable Neo(s)?

I have several favorite Neos; it's hard for me to choose just one, but as for actual value, the choice is clear. Kokubotan is by far my most precious plant followed by Tengyokuhou and Otaka no Yuki.
Some of my favorite plants, however, are surprisingly common and inexpensive.
M

I would participate more often here but it is very difficult to post pictures of my Furan. There is something I cannot figure out how to do so--using Tapatalk on an iPad. I have set up a Flickr account so I can capture BBcode, to no avail.
M

My most valuable plant is the Manjushage.

Most valuable would be my favorites like Seikai and large specimen of Benisuzume. I love Tamanishiki, but refuse to pay the outrageous prices for them, even here.

My favorites. These are not based on value but rather characteristics. When they get big enough it may be the other way around. I'd like to have a nice sized clump for each of these but they all have a long way to go.

It's safe to say that I am partial to shima striped neos.
L

I favor the bean leaf Neos and that's mostly what I grow.

Kasen 華泉 is probably my current favorite plant even though it is very common and generally low-priced. I find it grows and blooms well, and I very much like how it looks.

The following plants are all favorites of mine but not in any particular order:

Kabutomaru 兜丸 is a strong plant, looks great, has a wavy tsuke, blooms well and the flowers have a great scent.

Kokubotan 黒牡丹 is currently my most valuable plant and also a favorite. The reason why Kokubotan is worth so much is because of its ability to freely transform into Kinbotan and its related varieties. It's one of my favorites because of its smaller size, very shapely form and its sumi markings. It is not considered a bean leaf variety.

Otaka no Yuki 大鷹の雪 is on my favorite list because it is such a good bloomer with great fragrance and also a strong plant. This is a mutation of Otakamaru with slight wisps of yellow variegation which occasionally appear on the edges of the leaves.

Suigai 垂崖 is a favorite bean leaf of mine because it has great form, is a strong plant and the long-spurred, sky-facing flowers are tinged with pink. It also has a nice, wavy tsuke.

Aoshinju 青真珠 also makes the list. It is a tiny plant much like Kuroshinju, but it is easier to grow and the flowers are often tinged with pink.

Tengyokuhou 天玉寶 has amazingly wide leaves, a mountain tsuke and seems to be a strong plant as well. I'm having fun watching it grow and am anxious to experience its flowers...maybe next year!

I'm sure I will be adding more of my plants to my list of favorites as time goes by. Tsushima Ryokuhou, Kyokko and Suruga Kyokko are prime candidates if not there already.

I also have some I'm not so crazy about like Yodo no Matsu and some about which I am currently dubious, at best, like Kirinmaru, Eboshimaru, Isechabo and Amami no Mai There's still hope for all of these varieties, however, as time goes by. It all depends on how well they perform and whether or not they start to please my eye a little more than they have up 'til now. Isechabo and Amami no Mai are the two among this group for which I hold out the most hope.
Last edited: Aug 10, 2016