Angraecum didieri is a powerfully fragrant miniature Angraecum, that's relatively common these days and usually pretty affordable. They are supposed to be easy to grow (more on that in later), and a good introductory plant for those inexperienced with growing Angraecums.

I don't think I've had this plant for a full year yet, and it's already bloomed for me 3 or 4 times. This time around I'm getting 5 flowers from 3 spikes (2-2-1). Of the 3 growths, there are 2 spikes on the largest growth, and 1 spike on one of the smaller growths. Plus, the growth that isn't currently in bloom has a new spike just starting to form. The flowers are proportionally large, about 3 1/2 inches wide and 3 inches tall. The largest growth itself is 6 inches tall and nearly the same width. Of course, the best thing about the plant is the powerfully fragrant flowers that are scented for a few hours right around dusk. The best approximation I have is a mixture of gardenia and camphor, which I recognize may sound gross, but it's actually very pleasant.

The reason for that tentative clonal name is that this is my third attempt at growing this species. Despite having a reputation for being a very easy to species to grow, I did manage to kill the first two. I drown the first one. I soaked it in some mildly soapy water to kill off some tiny black bugs I noticed on it, something I've done with tons of other orchids without issue. A few hours later, I returned to a plant whose leaves had turned translucent and dark green, almost like it had cooked. The second plant didn't even give me a chance to screw up, within a short time of owning it, it started dropping leaves until there were simply none left. I still have no clue what I did wrong with it. But this third plant, it's been extremely easy and obviously floriferous!

I'm growing it mounted to fern root, but sitting down in a pot. I mist the roots more or less every day, but I have also placed it in a spot where it gets good air flow from the overhead fan. Then once or twice a week I also splash a bit of water on it when I'm watering the rest of the plants. I'm just extra careful to empty the saucer shortly after since I'm paranoid about rotting the roots. As far as light, it's getting fairly bright conditions as it is on the shortest of the shelves. That's more than enough light to keep my Cryptanthus colored up nicely. This time of year, night temperatures can drop into the 60 F range. I would normally reduce watering a bit this time of year, but the plant has produced an explosion of new roots in the past month and in my experience, if the roots are actively (and explosively) growing it's a sign the plant wants to be watered. 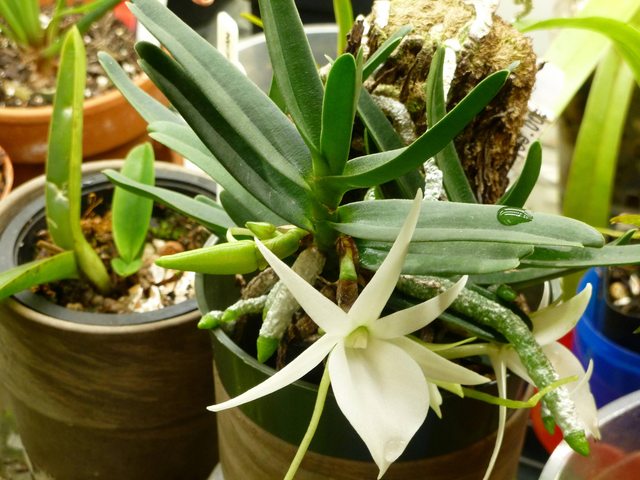 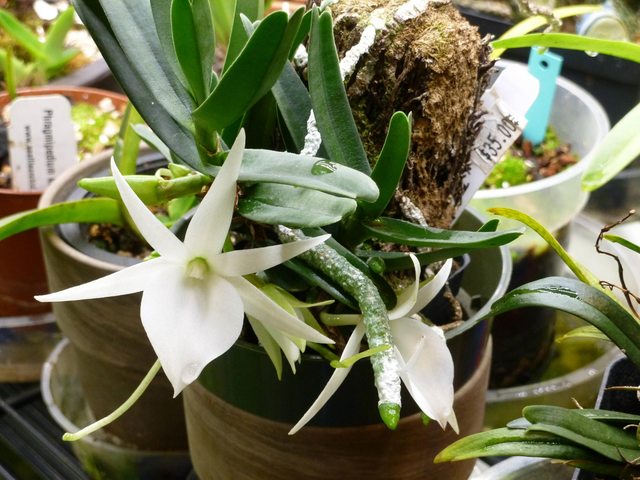 After previewing this, I realize that the price is showing on the tag. The tag itself is firmly in the grip of the roots so I am unable to remove it for photographs and I guess I didn't bother to take the sticker off since the plant is so beautiful that I don't really notice it. Considering that it was a 3 growth plant with a bunch of "spike buds" on it when I bought it, and that it was one of the healthiest didieris that I'd seen, I felt like $35 was a decent price. I've seen and bought smaller plants in the $20 - $25 as well, so it's really not a terribly expensive species.
A

I was so entranced with the flower that I didn't even see the price
tag until you mentioned it. Lovely plant and flower. I've never found
the proper conditions for Angs in my greenhouse, but now I'm inspired
to try again.
N

Easy to grow mounted but dries too much and blasts a bunch. Well bloomed, thanks for sharing.
Last edited: Dec 20, 2016

Mine is about to flower! Just one but still excited!
The bud looks different. First I thought the spike was turning into a keikis. lol

I can see it attempted to flower two or three times in the past but blated.
Not enough water at the nursery I guess.
It is in a 2 inch pot with very coarse mix. I mist daily and soak every three days or so.

Honestly, I'm tired of it. Will pot it up in fine mix once this flower is done.

Lovely! well done. I've also killed one, but will try again when I have the opportunity.

This one certainly looks healthy. I find these tough as well. I think the lower relative humidity for us non-greenhouse folks in one reason. Spritzing or watering everyday is a lot of work.

Thanks guys! Now I don't feel so bad about killing the first 2 plants. Most of my sources suggest this is a (relatively) easy Angraecum to grow. It's certainly easier than my mounted Aerangis, and some of my other ang alliance plants.

It does get hard to find the time to mist these guys down once a day, even if I do occasionally skip a day or two. However, the rewards for a fragrance fiend such as myself are definitely worth it. There are just so many strong, pleasant, and distinct fragrances in these guys, it's hard not to want more.

I'd say you have an exceptionally good plant! Happy for you!

Mine, only one bud, will open very soon. can't wait for the fragrance!!!

A lady in my society brought hers in bloom twice in the past years, and each time there was no scent since it was in the evening.

I wonder anyone grow this successfully in pot.
Mine has a little basal keikis growing, so hopefully it will one day look like yours.

By the way, this species was being offered like crazy (ok, a bit exaggerated) on eBay about two months or so ago, and very cheap!
I got mine then. I wish I had gotten more.
If I love the fragrance more, I will replace them with Aerangis fastuosa.
I like their fragrance too, but a bit weak.

Do you remember what mild soap you used??
It sounds very interesting what happened to the leaves as the leaves on this plant seems very tough. Who knew, right?

I should definitely remember that.

The second plant sounds like just a crappy plant.

All the more important to start with a healthy good plant.
Things can only go wrong. lol

You seem to have found a really good one the third time as you say, and it is obvious.
C

Mine died too.
Six months or less.

Happypaphy7 said:
Do you remember what mild soap you used?
Click to expand...

I don't recall. Probably Dawn Free and Clear dish soap or a comparable product as that's normally what I use for dishes. It was only a couple of drops in 1/2 gallon or so of water. Just enough to get some suds forming and break the surface tension. I honestly don't know if the soap played a significant part in it, I just think these Angs can't handle a prolonged soak. I've used this on numerous other orchids and house plants over the years, seemingly without any issues at all, so it took me by surprise.

Such weak dilution and the plant had a bad reaction right away.
That is very interesting!

Don't do that on this guy, ever! hahaha
L

Gorgeous! This is a great little species. I've always had good luck with getting it to grow and bloom -- bright light, moderate to warm days, cool nights, frequent wet/dry cycles, good humidity -- too bad I can't stomach the scent!

So mine opened up two days ago, and I can't detect any scent.
Oh, well...what a bummer.
L

It should be quite strong in the early evening.

Ok, it is very strongly scented, but I have to say I don't like it at all.
It is very much like some kind of factory chemical.

The flower is very pretty for sure!

Is yours strongly fragrant as soon as it gets dark and then the scent disappears quite fast?

That is what I observed today.

My other white nocturnal charmers like Neofinetia and B. nodosa are fragrant for a few hours at night.

They must have pollinators that are active right around dusk or my plant is a bit off.
L

Yes, it trolls out its stench/fragrance for just a few hours - maybe two or three - as soon as it gets dark and then it backs off. That has been my experience.