Just opened up its second bloom. No deformations on the pouch this time.

It bloomed in February 2021 for the first time but with a malformed & twisted pouch.
Not too bad given the parentage.
This plant (a mid sized seedling then) was a gift from a vendor in 2018. I almost gave it away in 2020 but i’m happy I kept it. 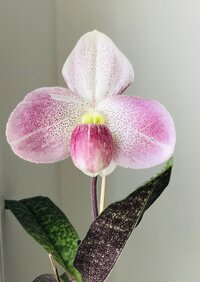 That is nice. Hopefully the flower lasts long...

Linus_Cello said:
That is nice. Hopefully the flower lasts long...
Click to expand...

It lasted for about one month last year which was what was expected.

Very nice! I love the shape and the blending of soft pink colors.

Aren’t you glad you kept it? Goes to show you need to flower 2-3 times to see potential.

That's wonderful. Love the pastel colours in particular. Yes, it would have been sad to give that away.
M

That is a nice flower
P

just love the softness of it. Would want one in my greenhouse

That's a keeper for me.

Thank you, all!
I think it is a keeper until I find something even better.
I do have Ho Chi Minh x bellatulum just starting to show a low sheath. Fingers crossed!!

Thought I would put in some info regarding culture.
I got this plant around 2017 as mid-sized seedling. They were about 6 inch from leaf tip to tip. I hoped that was near blooming size as I had bloomed a couple of similar hybrid at this size. Unfortunately, this plant got much larger and eventually reached 8in in length for each leaf when it finally bloomed for the first time in the spring of 2021.

It is still sitting in the same potting mix in its 2.5 in tall square plastic pot it came in. I would guess that the plant had been in this pot at least 1-2 years at the time of purchase. The mix is mostly orchiata with some perlite in it but very little of it.
All I did was to add thin layer of sphagnum moss on top to keep the top roots covered.
The plant looks very healthy with not a single disease spots or suspected salt burn on the leaf tip.
I water with my tap which is very low in dissolved mineral contents at around 40-50 TDS.
I fertilize about twice a month during the warmer months at about 30-50 ppm N. I do 100ppm N occasionally but most of the time it is on the lower end close to 50 or lower.

Right? Exactly my thought! I wish the leaves were shorter and darker like vietnamense.

Phragper said:
just love the softness of it. Would want one in my greenhouse
Click to expand...

I think I saw an offering of flask at Orchid Inn, but I'm hesitant to try as parvi x brachy paring often results in some uglies.
However, I see again and again that leucochilum does wonders to this type of hybrids as compared to when bellatulum or other brachy is used as a parent.
So, I might just get a flask and try and wish for the best, or wait until a blooming size plant becomes available in the future. Still deciding.
N

Thank you for sharing all the great information and beautiful picture. Thank everyone for all the wealth of information that you offer

I wonder what selfing of this would give? Just for the heck of it, you know?

Can an admin change the title for this thread?
I made a mistake. Somehow, I was mistakenly thinking this was vietnamense x leucochilum but the tag says Pink Sakura (vietnamense x concolor).
sorry about the confusion.

Unexpectedly stunning, exactly what you hope for from a cross like this, congrats!

That makes so much more sense! The form of the dorsal, the size of the freckles, etc.
Looks like a shy vietnamese

I really love the color on this.