Joost:
“colloidal sliver can do this”. Are you saying spritz blooms with colloidal silver? Concentrate or diluted?

Joost said:
colloidal sliver can do this
kelp will give you aminoacids the advantage being the plant it self can save energy producing them

the effects i have seen so far have always been very limited and not very clear
but that should not keep you from trying!
Click to expand...

Have you tried Kelpak or other brands?

One thing to keep in mind: there are two products sold under the “Kelpak” trade name, one is the biostimulant, which is what this thread is about, and the other is a fertilizer, which I have never used not seen much abo7t.

An update: the first blossom dropped today, meaning it lasted 32 days. I’ll be honest that I don’t know what the average blossom lifespan for this plant has been the prior two times it bloomed, but it seems a lot longer this time, and it has certainly carried more blossoms at a time.

Looks like the experiment worked to extend the flower life on your Phrag. Floral auxins seems to be affected by these kelp hormones to play a role in its longevity. I’m interested to hear more on these empirical experiments by others. Perhaps I’ll try myself too.

FWIW, I have a Phrag Sorcerer’s Apprentice coming into bloom, and I sprayed the first bud a few days before it opened. I got the division from Hadley about 2006 or -7, and it has grown , bloomed, and been divided several times since then, and - again, “gut feel” only - it appears to have longer petals than it ever has had before…

My Sorcerer’s Apprentice is now 10 days into carrying two flowers, which is easily a week longer than I’m used to, and the Lucky Girl, having lost the first blossom, opened another, so is continuing with three...

I shared my observations with the technical director of Kelpak, and he responded:

"That is an excellent result!! I may have told you in the past that we found a large amount of polyamines and phlorotannins in Kelpak and that we believe that these compounds are responsible for some of the effects we see with Kelpak application.

I believe the effect that you are seeing can be attributed to the polyamines. The are known to aid in flower formation, and play a vital role in stress mitigation in plants. They are also known for their anti-senescence effect! Many years ago, there was a publication that showed that the shelf-life of tomatoes and cucumbers were extended by 7 days with the application of Kelpak. Now that we are learning more about polyamines, these observations make more sense."
N

Yes, and proud of it.

Ray, I’ve never bloomed this plant before as it came to me in spike but I did put KelpMax solution on the spike where the flower stem joins it once, about 3 weeks ago. It opened and is still open 2 days after the second flower opened. Phrag. Susan Kulhavi (Saint Oven ‘Ice Queen’ JC/AOS x andrettae ‘Ghostly’). Will report again when flower drops. 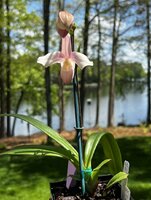 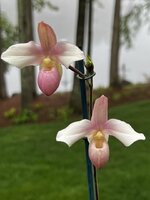 Well I rejoiced too soon. The first flower fell this morning. So, basically 1 ½ days after second flower opened.

When I tried, I thoroughly sprayed (wetted) everything in the top 9” of the flower spike - spike, flowers and buds.

Hmmm. I might try this on my micranthum flower. How long do they usually last? I seem to remember reading somewhere, "not long." It's been open since 4/27.

Woo hoo! Finally! My first load of Kelpak 1L bottles left the California warehouse yesterday, so I should have them late next week.