Well, she finally bloomed. I tried to hold out on pictures and wait until all the buds have opened but it doesn’t look like she will afford me that luxury as many of the first flowers are starting to fade.

This plant I purchased at the Redland show in 2012, source unknown.. it was hot and was a last minute grab at a small vendor table before leaving the show. I never thought I would be able to bloom this and bought it because I really like the vanda shape of the leaves. Last year it put out a spike that aborted but this year it was successful. Instead of staking it like last year I decided to tie the spike down to a rail on the bench and I continued to tighten the tie as the spike grew.

The flowers don’t seem to fully open but the backs are a brilliant magenta and the front of the flower is a strong yellow with dark burgundy spots.. I am also very amused by the angry man face. In each bloom.

sorry for the growroom pics but this planthas a network of roots across the entire table. 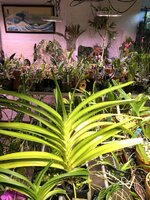 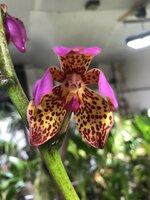 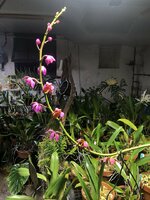 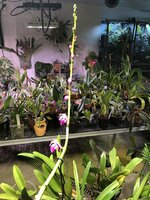 Interesting! I’ve not seen this species before,
David
A

It was hot at Redlands!?!?
Well done. Thanks for sharing.

abax said:
I like it! Very unusual and eye catching. Might it have a fragrance (smell anyway)?

NYEric said:
It was hot at Redlands!?!?
Well done. Thanks for sharing.
Click to expand...

It's always sooo hot under those tents.. Next time I head down to the sunshine state, I think I'll opt for the Tamiami International Orchid Festival | Orchid Festival I have seen videos from attendees boasting a nice cool large convention center and reggae music playing in the background. My kind of scene, would make shuffling through thousands of orchids way less stressful.

Wow! What a great color of this particular one. The magenta background is not usually so bright and really adds to the contrast.

The tight weave of the plant stem of the interlocking leave bases are so neat.

PS I think more grumpy than angry lol
A

It wasn't the heat...blahblahblah...it was the gnat invasion the year I attended. Gnats in
your food, gnats in your eyes...really quite miserable except for the company and the
ever alluring orchids. Great reggae band as well.

im surprised you can flower it under lights. Well done.

It grows in a 1 gallon nursery / cymbidium pot with a chunky orchiata mix. But the roots are networked all over the grow table.

Correction. As the flowers mature past prime they turn a bit more yellow, the magenta back fades but their overall structure is still intact. I noticed the last few days about mid day a slight fragrance on these older flowers. I had to document this, because it caught me off guard it smells like a box of nag champa incense. I’ve never picked up a scent like this before from a flower so I’m very excited and had to double check today to confirm.