Interesting that IOSPE doesn't have this listed as fragrant. The fragrance was one of the top of many reasons why I purchased this plant. It's not a super powerful scent, but it's very pleasant. Depending on my mood and the plant's mood, it reminds me of either orange or strawberry pez candy. Very simple, delicate, sweet and fruity smell.

This is also my only Vanda. Vanda and close allies have a reputation of needing a lot of warmth, high humidity, and a lot of light. Many of the common hybrids aren't really good candidates for growing indoors, under T8 lights, on metal shelves.

Vanda vietnamica seems to break all those perceptions. I wouldn't exactly call this a mini, but it's certainly a dwarf sized plant, and one of the smaller members of the genus Vanda.

It really doesn't seem to need much more light than a Phalaenopsis to grow well and bloom. In fact, for most of the time I've had it, it's been growing in a basket hanging by the side of the light stand. It has multiple Tillandsia companions, and almost no potting media other than what's left down in the tiny 2" pot I bought it in. The Tillandsias shade the leaves a bit as well.

As far as water goes, I splash it with water about twice a week, dunk and soak it at least once a month, and when I have time or don't forget, I mist it in the morning. I don't use fertilizers very heavily on any of my plants, and this Vanda isn't an exception. It probably does get slightly more fertilizer than the Phrags, because I periodically cycle in a small amount of fertilizer into the bottle I spray with to ensure the Tillandsias are fed well, meaning the Vanda gets some of that as well as the normal fertilizer I add when I water.

I moved it outside for a short time in the summer because I thought it wasn't getting enough light, since it didn't bloom in the spring. But, as it turns out, its siblings at the vendor didn't bloom until this Fall as well, so I'm guessing this species is a fall bloomer.

The flowers are nice sized, and I like the color of them. The plant originally started producing 2 spikes, and as the buds started becoming noticeable, I moved it back indoors to protect it from pests and weather trauma. Unfortunately, after doing that one of the spikes aborted, presumably from the cooler temps and lower humidity indoors. However, the second spike continued to develop nicely, and I got a couple flowers out of the deal. 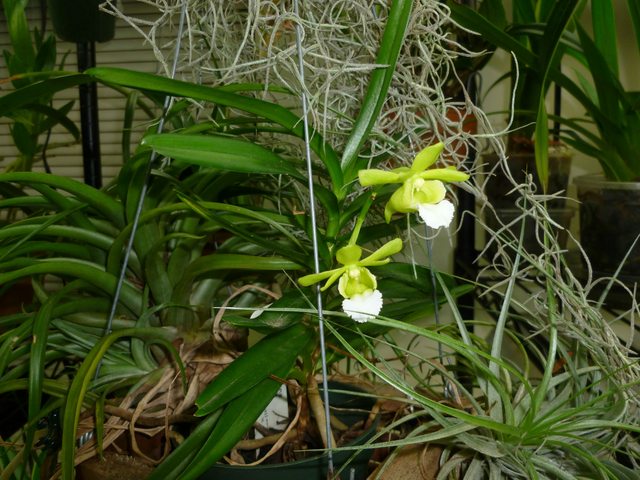 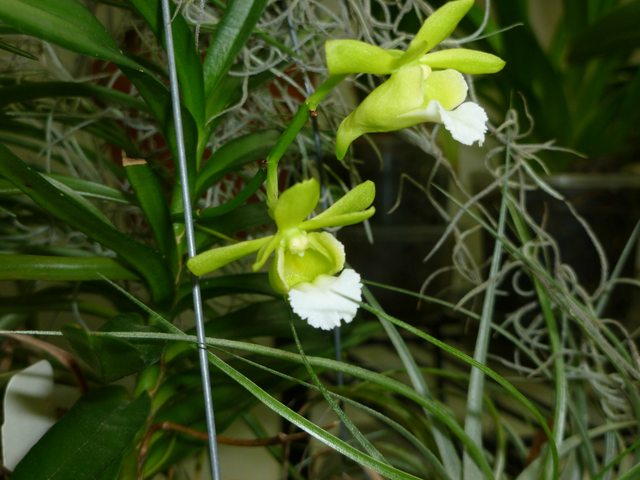 There are several in the Vandaceous group that do better in less light than most Vandas are noted for. They like to flower, also.
A

Ooooo I do love fragrant flowers...even if they're green.
That white lip is a stand-out.

Green and white - one of my favourites! Thanks for sharing this beauty!
M

I love the green and white color combo on this one and the fragrance & floriferousness must be a great bonus.
N

It is a pretty species. It looks like pretty big plant, nice growing!
L

I was inspired by this thread to buy one from J&L at the NCOS show.

Linus_Cello said:
I was inspired by this thread to buy one from J&L at the NCOS show.
Click to expand...

Yay! I hope you enjoy it. I've been surprised at how forgiving and rewarding it's been to grow this plant. Also, it's nice to know that other things besides the paphs and phrags can enjoy my care and growing conditions.
N

Linus_Cello said:
I was inspired by this thread to buy one from J&L at the NCOS show.
Click to expand...

Shameless plug!! oke:
Thanks for sharing. I think I have a small one of these somewhere in the apt.
L

Does anyone know if these grow well s/h?

I like the green & white flowers. And I especially like the way of your writing. It's a pleasure to read such a well verbalized text in a forum. Thank you!

Very cool, I like the contrast between the white lip and the green. I appreciate the very informative post as well!

Thanks guys, glad you liked the info.

Linus_Cello said:
Does anyone know if these grow well s/h?
Click to expand...

I personally would not Vandaceous in S/H because they like to dry out between waterings and they like a lot of air around their roots.
G

Ugh...another one lumped into Vanda.

Beautiful flower and plant though!