I bought this plant about a year ago from Regina Elsner just a few months before she retired and gave up her orchid business.
The plant when it arrived was clearly very well established with nine bulbs, two leads and great roots. I was very happy to find a plant as they are as rare as hens teeth in Europe.
It is way darker than any other mossiae and for this reason there are two internet theories as to why this is.
The first is that it is actually x gravesiana, a natural hybrid of mossiae and lueddemanniana.
From looking at the flowers today, I doubt this. They have the texture of cardboard and I suspect that it is a tetraploid. It looks to me to have been bred. The flower is quite unlike a normal mossiae in form as well as colour. In addition it is very early to flower for a mossiae.
The second theory is that it is a line bred clone, over 5-7 generations from the 1940’s and 50’s in the USA when mossiae was a popular cut flower. They grew large populations and it may have been possible then to select and cross the darkest flowers from each generation and over time produce something like this.
It is also possible that one of the parents somewhere along the way had a bit of lueddemanniana blood in it and this contributed to the super dark colour.
We know from Dr Leslie’s post of the F3 trianae that it is possible to get quite far away from the normal forms of cattleya species quite quickly, so my view is that it is line bred. 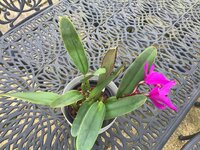 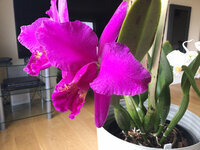 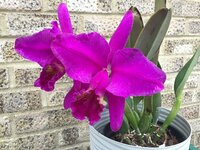 The clone has a reputation of being a finicky flowerer and quite capable of producing poor blooms unless well established and mature. I am very happy with this blooming and we will see how things develop. This is day 1 after opening and the scent has yet to kick in.
David

Very nice clone whatever it is.There is the same problem as with lueddemaniana s/a Cerro Verde.I think it is straight mossiae.

I took this pic from net.If we put on this the coloration, two yellow patches will remain on the side lobe maybe this is the reason of theory of lueddemanniana blood.

Dodidoki,
The main reason people think it has lueddemanniana blood is the depth of colour. Very few unifoliates have clones with this colour but some of the rubra clones of lueddemanniana are very dark. They are called the larense biotypes and come from a specific geographical region which is very dry. Some of the lueddemannianas in this region grow on cacti! Plus there are some natural hybrids between the two species.
David

David, many thanks for useful info!It is very rare and famous clone, indeed!
N

Thanks, David. I have been looking for the arguments to be pulled together. Mine is in bloom now.It seems obvious that this has been mericloned, probably more than once because we can’t all have divisions of the original. That would create potentially more variation. My plant must be divided this year after the blooming is done. I still can’t get a sheath with mine and maybe that was the case for this blooming of yours?

Terry, this plant has a small sheath on both leads!
David
T

Several of these dark mossiaes have surfaced over the last three decades with dark rubra flowers with intense colour. These include 'Panther Creek', 'Michael', 'Friar Tuck' and 'Dark Prince'. Apparently these were from the same seed pod.

After growing and blooming my 'Willowbrook' for many years, researching and consulting with numerous cattleya experts, I have come to the conclusion that it has been contaminated with lueddemaniana for several reasons:

1. The rubra colour does not exist in nature for mossiaes. No amount of breeding with natural dark clones could produce this color.

2. The substance of the flowers are not delicate like true mossiaes but are firm like lueddemanianas (almost like soft cardboard). Due to this harder substance, the petals are able to hold up more upright and straight.

3. The plant stature of those dark mossieaes have stouter bulbs and more erect narrower leaves than type mossiaes (under optimal conditions). Flowers also fuller due to lueddemaniana's full round shape.

4. The blooming period of these rubras are always 2 to 3 months before ALL mossiaes, closer to lueddemaniana blooming season.

5. And finally, the glistening texture of the flower in full sunlight mimics the rubra Larense ecotype lueddemanianas, when placed side by side.

With these reasons, it is without a doubt where this plant lies. The question is what to do with this information?

My suggestion is to keep name as is for historical purposes. But when breeding, the Gravesiana should be listed as the parent.

Interestingly, I heard selfings of these types were very variable.

Dr Leslie,
many thanks, you are indeed the oracle for unifoliate cattleyas!
Do you know who produced the pod of all these seedlings?
David

monocotman said:
Dr Leslie,
many thanks, you are indeed the oracle for unifoliate cattleyas!
Do you know who produced the pod of all these seedlings?
David
Click to expand...

Thanks for your confidence in my unifoliate knowledge lol.

I don't know (or remember) the source of this original pod, but I will do a little investigating to see if I can find out. It might be a US nursery in the late 70's or early 80's.

Good luck Leslie.
putting my plant breeder’s hat on it would seem that the most likely thing to happen was that a x gravesiana was used somewhere in the early breeding, whether by intent or accidentally, we do not know.
Thousands of mossiaes were imported in the 40’s and 50’s for cut flowers and you would expect the growers to select the best forms and put them to one side. Did they start breeding them then? Imported wild plants were so cheap that it would not be worth it on a large scale but maybe for a select few?
If the odd wild collected x gravesiana made its way into this select bunch due to the deeper flower colour I would not be surprised.
I agree with Leslie that you could cross mossiae for a hundred years, selecting out darker colours and still get nowhere near the colour of willowbrook. The variation simply did not exist for this colour form in the pure species until the lueddemanniana genes appeared in the form of x gravesiana.
From then on it would just be a case of crossing and selecting the darkest forms in each generation until you reach willowbrook. Quite how long this took and how many generations is anyone’s guess.
David

Beautiful.
lip markings remind me of lueddemaniana. (but what would i know...)
T

I have an intense urge to change my label to Cattleya Gravesiana ‘Willowbrook’. I won’t be breeding, but I believe in using the best evidence available to update nomenclature. Mistakes happen but we can fix them.

Just wanted to share my blooming of this plant a few years back in the link below. Back then, I was already playing with this introgression idea.

Despite the controversy about its parentage, it's a beautiful colored flower. One day the mystery of whether it's pure mossiae or x graevesiana (hybri
www.orchidboard.com

Leslie, lovely photos. Do you still grow your plant in leca?
Terry, I would not change the label. It may not strictly be a x gravesiana. At some point the x gravesiana may have been crossed with a true mossiae and that would produce a new grex. Only if the original plant, assuming that it was a x gravesiana had been selfed and then the progeny repeatedly sib crossed could you call it a x gravesiana still. We dont know that.
I agree with Leslie that the original name is still the best.
T

You are right. Likely not pure Gravesiana and maybe not fully diploid. There are probably other famous Cattleya species cultivars that are not 100% pure.

Terry , almost definitely.
Here are a couple of others that are problematic:-
cattleya lueddemanniana ‘ cerro verde’
cattleya jenmanii ‘Fuchs snow’.
These are just the ones we know about.
There are bound to be others that will only be uncovered by genetic testing,
David

Some updated photos taken outside.
The flowers are now more mossiae like, the petals have grown and are now characteristically forward facing. There is a slight scent. 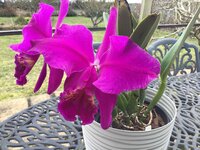 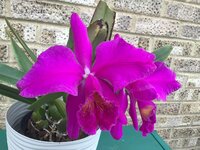