My only success with a large, full, strongly yellow Cattleya flower has been with Rlc. Chyong Guu Chaffinch ‘Sunset Blaze’, which just opened again with two flowers about 14.5 cm horizontal natural spread. The tips of the petals and sepals curve posteriorly, reducing the measured width of the flower. 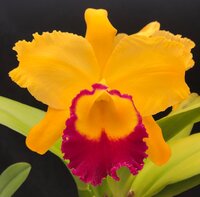 What I have read suggests that breeding for large flowered yellow Cattleyas is difficult. Chadwick’s description of the problem and the development of the outstanding Rlc. Williette Wong ‘The Best’ can be found through this link:

There is nothing easy about breeding large yellow cattleyas. Hybridizers have been trying fervently since 1901, when the very first attempt at combining two lemon-hued species took place. Since then, there have been hundreds or even thousands of pairings – mostly with disastrous results. The...

Williette Wong was (Tassie Barbero x Toshie Aoki) and was registered by Orchids of Waianae in 1990. There are 18 species in the background (dowiana about 60%). Only three cultivars have been awarded with ‘The Best’ receiving an AM in 1999. It had two flowers with horizontal natural spread of 14.7 cm.

My Williette Wong ‘The Best’ perished under my beginner hands many years ago and I did not replace it. I have not yet bloomed my Cattleya dowiana var. aurea, Rlc. Ann Cleo ‘Lea’, or Rlc. Toshie Aoki ‘Pizzaz’ that should all have some yellow. I have been blooming a good Cattleya Triumphans (dowiana x rex) for several years, but the color is not a vibrant yellow and the form is more open.

Chyong Guu Chaffinch was registered in 1994 by C.F. Tsao as (Yellow Ball x Sunset Bay). There are 14 species in the background (dowiana about 40%). Only three cultivars of this hybrid have been awarded with the highest AM points to ‘Suzanne’ in 2003. It had two flowers per inflorescence with a horizontal natural spread of 14.7 cm. ‘Sunset Blaze’ has not been awarded.

Rlc Kelsi Ikeda (Chyong Guu Chaffinch x Williete Wong) was registered by Akatsuka Orchid Gardens in 2012. No cultivars of this cross have been awarded, but I can find pictures of several cultivars online and interestingly the red/magenta coloration of the labellum is almost gone as can be seen in this picture of ‘Volcano Sunshine’ on the Akatsuka web site:

There must be polyploidy at work or a lucky merging of recessive genes to form such bright yellow coloration in this small group of hybrids. I would be interested in other excellent, strongly yellow, large flowered Cattleya alliance plants that you have, or have seen.

Nice work on this plant.

My all time favourite yellow is Rlc Alma Kee ‘Tipmalee’ AM/RHT-CST, a deep butter yellow with a scarlet red lip. Classic heirloom which was famous in the 80’s in Asia, where I grew it in Thailand.