I have lost many a philippinense to rot over the years so moved to net pots. Haven't lost any since. Taking this net pot idea to another level I've moved other multies into nets but with the addition of a plastic solid pot.
Here is a 2 growth stonei i just repotted today. It was hard to get it out of the 6 inch solid 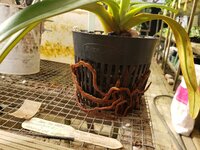 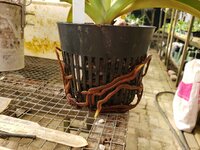 A philippinense growing the same way 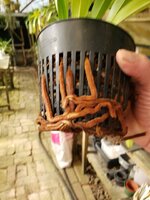 Looking good! I have wondered about doing similar with my net pots as it is a bit too dry on my house I think for the nets to be the perfect choice. Do you use clear pots with holes in the bottom?

Let's think about this for a minute: in nature, these critters live on the surface of the earth, with their roots spreading under the accumulated leaf litter - so in the interface. Your have created a plastic-within-plastic interface.

great idea.
Can you show the pot-in-pot?

I don't have any clear pots but I bet you would get the same results.
I'm sure you are onto something Ray!
Here you go Stephen 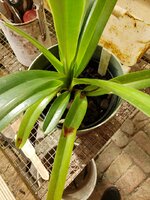 So eds that was my issue initially, being too dry. In my search for keeping humidity around I noticed the 5" net fit tight into the 6". Its not easy to pull the net back out for an inspection but I did leave a few plants as seen above. My next idea was add a few styrofoam peanuts to bottom of the 6" to hold the net up so I could easily pull the net out. I got the same results but not as dramatic. See pics 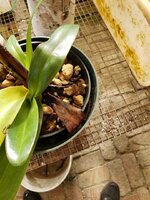 And with the up and out 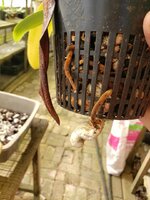 I use something very similar for some of my cattleyas. They seem to love it,
David

Well, if nothing else, it does create the situation in which those roots are neither wet for a long time, as they might be inside a solid plastic pot, nor dry out quickly, as might be the case in a net pot. The “Goldilocks point”.

Good name, Ray--the Goldilocks Principle, neither too wet or too dry. Here is how I would state it: "Healthy roots are critical to orchid plant health. The velamen covering the roots is kept healthy by maintaining an acceptable ratio of air and water at the roots. This ratio may vary between genera or even species in a genus. The variables are the medium, the container and the ambient humidity in the growing space."

As Ray knows, I've been playing around with various plants in Semi-Hydro, and the above is the conclusion I have come to, regardless of medium or growing technique. Orchids are epiphytes and like to have humid air at the roots. The closer we can come to that, the better. So I'm not surprised at the photos of the roots above, particularly if grown in a decaying organic medium (Pinus radiata or Orchiata or similar seems to decay more slowly than most of the fir or Doug fir mixes). But even in S/H there is variation among genera. Some genera (Miltoniopsis is a good example) have fine roots and seem to like to be wet, unlike Catts and the monopodials which appear to like more air at the roots, so for some of them (like Catts) I will do exactly what was illustrated here, except using S/H, and so far the result is good. I think Phals may like this as well (though they also like heat at the roots). I go a bit further with Tolumnias and Vandas, which are placed in an empty plastic net pot surrounded by moss inside another pot (clay or S/H) to keep the humidity good around the roots. So far so good.

As for the top layer of leca in semi-hydro (the advantage of leca appears to be its shape as much as its composition, as it allows more air around the roots). The disadvantage is that the top layer can stay too dry. I'm trying both NZ sphag as well as live moss (I live within sight of Puget Sound, so no lack of this, we aren't called mossbacks for nothing, particularly this winter). I added this layer to my Paphs and Phrags a few months ago, and when I checked themthe other day they really like it with lots of new growth (of course it's also spring here and I use bottom heat until it's warmer). New roots of course come at the top of the transition from root ball to plant and so they like something damp to go into, much as they do in nature.

Compact Multi vs. Not So Compact