Phragmipedium Ouaisne (dalessandroi x Eric Young) was registered in 2004 by the Eric Young Orchid Foundation. There have been three AOS awards for Ouaisne, with the most recent being an AM for ‘Dolly’s Pick’ on June 8, 2019, shown by George A. Bogard. The awarded bloom had an 11.2 cm horizontal natural spread. I do not know about awards by the RHS.

There have been a small number of Ouaisne flowers shown on Slippertalk. My plant is from an Orchids Limited cross (dalessandroi x Eric Young ‘Ember Glow’). ‘Ember Glow’ was made with a confirmed polyploid longifolium ‘Fernbrook’ and was pictured in a post to this forum in 2014.

The dalessandroi paired with Eric Young ‘Ember Glow’ was diploid so my plant could be diploid or still polyploid depending on how the genes shuffled. This is the fourth flowering of my plant (blooming approximately every 10 months) and the first few flowers each time have consistently been 12.0 cm in horizontal natural spread and subsequent flowers hold the size fairly well. The current spike is branching. The plant is large, has been a vigorous grower, and is not stoloniferous. 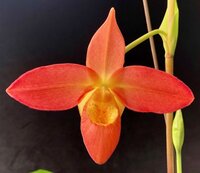 There is continuing debate amongst experts about whether dalessandroi is a separate species from besseae (Gruss, Orchids, September 2020 and Cervera, Orchid Digest, October 2020). The current RHS classification has dalessandroi as a variety of besseae, which means that hybrids made with dalessandroi have different names than the same cross made with besseae. The cross (Eric Young x besseae) is the famous 1995-registered hybrid Don Wimber, to which Ouaisne of course bears a strong resemblance.

I love my Ouaisne! They are easy to grow and bloom and they give us a wonderful burst of color!
A

Here is one of my Ouasine from last fall that received an HCC at The Dallas Judging center.

Almost looks polyploid to me. What was the breeding?

What were the exact parents of your plant?
N

The shape of the blooms is easily distinguishable from Phrag. Don Wimber. Yay besseae hybrids! I don't think this cross has been around long enough to see many blooming yet. Especially when I think of some of the MASSIVE Don Wimbers (registered 1995) that I've seen.