This is Phalaenopsis cornu-cervi fma. chattaladae 'Orchidgrove' CHM/AOS × sib 'Chinainthorn', from Troy Meyers TN6337. It is interesting that some siblings of this cross came out as flava/alba form, but mine had the original deep red. The reciprocal cross didn't have any flava offspring, so it appears some funky genetics is involved.

I believe this is the offspring of the original fma. chattaladae. One of the parents (I think 'Orchidgrove') is the type specimen of the form. It is the offspring of the two only known collected specimens, then known as Phalaenopsis cornu-cervi 'Pravit Chattalada' JC/AOS (awarded on April 18, 1979) and the second plant found some 25 years later, 'Oun'. A sibling of 'Chinainthorn', the cultivar 'Maria Teresa' has been awarded AM/AOS.

I forgot where I found this info about the lineage, but I kept this note from somewhere (I think there used to be a web page for P. cornu-cervi fma. chattaladae). My plant is derived from the cross done by David L. Grove in Aug 2007. I received a small seedling in 2014. For some reason, it is a slow grower compared to another individual which came from Hawaii. 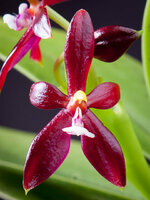 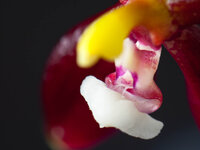 Thanks for the provenance… wonderful story behind such a great color form.
A

Very interesting Naoki. I have one, but it's a reluctant bloomer and I've forgotten where
I got it many years ago. I have it mounted on bark with sphag. How are you growing
it?
N

Angela, mine used to be mounted, too. But under my condition, it grows better potted. It is potted in just medium size barks, and it is in an intermediate temp area (65/80F in the summer, and 60/70F in the winter).