Phal. Equestris and all its variations

So I have been on a Phal. equestris kick lately. I find the different variations fascinating, but there seems to be a lot of conflicting info on the web. From what I can gather there are several variations, but I can't get a clear idea of exactly what those variations are.

These are the variations I know exist...

And these are the variations that I can't figure out clearly what they are...

Some of these may be duplicate names. Can someone shed some light on what the true variations may be, and describe what the difference is? I know, that is asking a lot, but I need to learn this.
S

Check out this webpage for some of the answers to your questions.

Ya' know, you should pose your questions to Peter Lin's, "Big Leaf Orchid Forum". Robert Bedard (Phalaenopsis equestris expert) would probably jump at the chance to reply!
R

There is also peloric forms of equestris. I purchased one earlier this year.
P

Thanks for that link. It really illustrates the wonder of the internet when someone in France teaches an American about orchids from the Philippines.

I am a member of the Big Leaf forum. I just wanted to have a discussion about phals on my own turf. Maybe someone should invite Robert Bedard over here. I have been at his site enough times to count as a lurker there.

I am not as much interested in the peloric equestris. I have seen several though which makes me wonder what percentage of the equestris grown from a flask turn out peloric.
P

So here is what we know so far, based on the information learned in that link...

equestris var. rosea- also known as 'ilocos' after the island on which it was found, this equestris bears smaller flowers with uniform pink coloring and a dark pink lip


equestris var. alba- white form with a touch of yellow on the callus

And then, according to that site, the following two are not recognized variations, but appear sporadically more like forma.

equestris var. leucotanthe- waxy white flower sometimes suffused with pink, yellow callus with brown spotting, dark pink blush at the start of the lip while the rest of the lip is yellow-orange

I can't post photos of these two because I can't find one that clearly illustrates the variation. That was part of my confusion in my previous internet search.
R

Thanks for the invite, John. While I appreciate Jim's comment, I am not an expert. I just happen to be opinionated, and willing to share. I have also been growing orchids for over twenty years, so have a little experience to back up my assertions.

That said, I am also not a taxonomist. The whole issue of what to call things has probably been discussed in this forum before. Dr. Christenson's contribution in his monograph on Phals notwithstanding, the taxonomy of certain sections of the genus is still, in my opinion, a mess. Phal equestris is one.

In the US, Christenson seems to be how people like to label their Phals. Outside the US, people still seem to like to use species names that he has reduced to synonyms. I don't care to get in the middle of that. I like to make hybrids, and I just want to know what to call the things, and the more specific and correct, the better.

That's the context. Okay so now for equestris varieties. Christenson revised equestris and if you subscribe to his taxonomy, "valid" equestris are: var. rosea, fma. alba and fma. aurea. These distinctions are all based on color, not flower morphology, so in a way, that leaves it open for the other types; while he chose not to recognize them, others do. 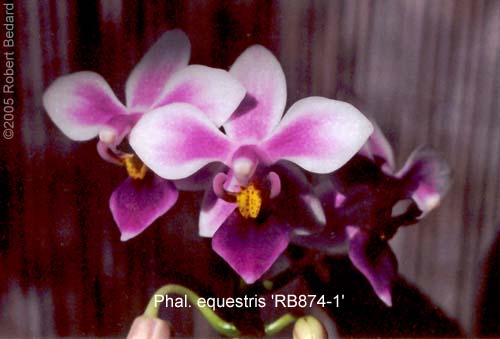 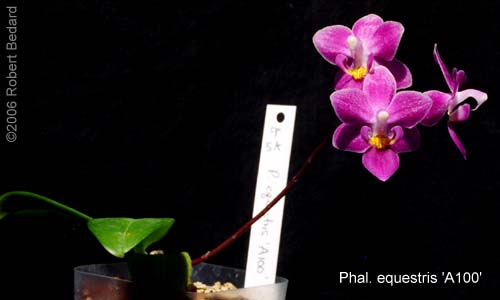 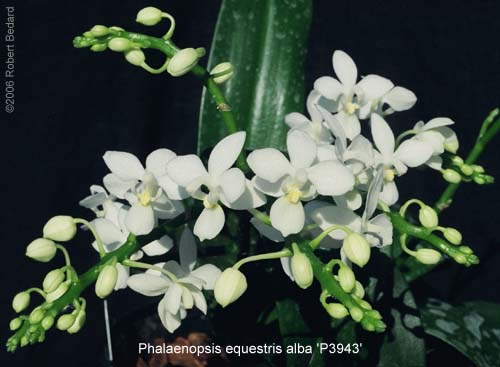 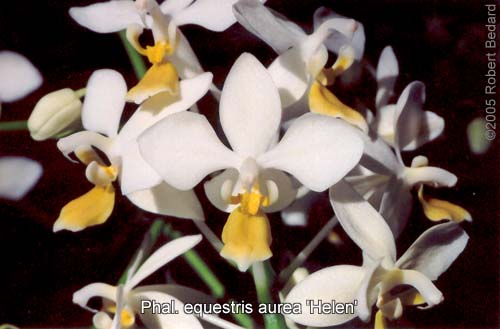 So, the alba and aurea forms flower with lindenii, and have a strikingly similar lip structure. The callus is definitely equestris, but the midlobe looks like lindenii. I am not making an argument that they have a common ancestor or anything, I will leave that stuff to those more qualified ... but I will say one other thing, and that is equestris fma. alba and equestris fma. aurea tend to produce seed with lindenii more easily than with other members of their own species.

Hope this helps a little.
R

Here is a recent import, that I think probably represents a "hybrid" of var. rosea with fma. aurea: 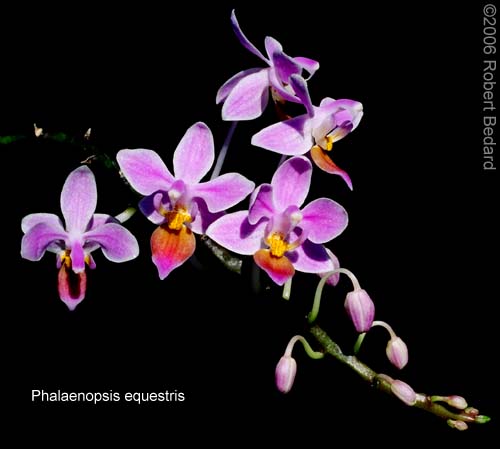 I really like this color, even if the proper nomenclature is unclear.
P

So how are blue/lavender equestris and these new "multicolored" equestris classified? Just plain equestris?
P

And where is a good source, if any exists, to get species equestris plants that haven't been linebred to death? Would I even want to, as sometimes the true-to-genetic-source species can be difficult to grow?
R

Equestris cyanochilus is supposed to be the blue form, it is the lip that is slightly blue. I have never seen one that I would call blue, but that doesn't mean that they aren't out there. Blue and lavender are notoriously difficult t ophotograph accurately, so it is possible that some of teh photos I have seen of cyanochilus simply do not do it justice, but so far they all mook a lot like mediocre equestris to me.

The lip color is essentially separate violet and yellow components. The correct balance of color yields red, or the absence of violet produces the aurea form, and the absence of yellow creates the pink or violet lip. If you get one with less yellow and a form of violet that is more blue than purple, you get cyanochilus.

I think it is quite probable that the population from which that last photo came was an artificial "hybrid", not a naturally-occurring population, but I have no first-hand information about that. You'll note that I just called it equestris, though it came labeled as var. rosea. I got a number of plants from the same source that were labeled rosea and leucaspis; in looking at enough plants, there was very little difference between the two populations.

In general, equestris is a weed. Yes, there have been some famous line-bred populations that have produced plants nearly impossible to keep alive, but that is more the exception than the rule. Once I started letting more air get to the roots, (looser moss, or coarser bark), growing a little brighter, and watering heavily in summer and lightly in winter, they all seemed to grow pretty well for me. You also want to remove the keikis when they get large enough, if you get too many, the entire plant and the keikis it is supporting will go downhill.

I think the best way to get a good grower is to buy a flask or community pot, and allow natural selection in your environment to do the rest ... ;-) ... or you can buy or trade keikis with people that have known good cultivars. I think most of the plants that came in with the last photo above will be pretty good growers; that one has the best color of any of them so far, it is not really representative. I have those for sale, and siblings of the plant in the first picture, which is a selfing of equestris 'Riverbend' AM/AOS, and I sell keikis from selected varieties, including the alba shown above. I also have a sib of a light pink rosea in the lab right now, will have flasks and seedlings of that next spring. In general, the equestris I have purchased from others have been awarded or select cultivars, and those are not always the best growers. But you can almost always select out vigorous plants from a given seedling population, so that is how I like to get vigorous cultivars; make my own.
S

See John....I told you so oke:. Rob't has the answer (or opinion, at least) if no one else does about the weed, Phal. equestris . Just look at the hybrids he has made, or owns, of this species :drool:.
P

Well, I have six equestris now, and nine more on the way. I think I am pretty much set. Though, until they bloom I guess I won't know for sure what var/frma they are.

PHRAG said:
and nine more on the way.
Click to expand...

Well, they were cheap.

PHRAG said:
Well, they were cheap.
Click to expand...

9???hmmmmm...did your wife really scream at you or did you just need room! oke: :rollhappy:

By the way john if you ever get keikis on yours and looking to unload keep me in mind. same thing with and violacea you have :wink:
P

What Phals to order?

Phalaenopsis schilleriana and a unknown hybrid