Ozpaph said:
All very interesting, and technical, but why would adding the 'forma' be important in awarding a species? Surely they are all 'just' colour variations of villosums and should be collectively compared as they are a single species.
Click to expand...

The short story is if we keep everything labeled correctly and keep good records we can always make corrections later if we need to.
Other examples might be:
adductum and anitum
concolor and josianae
barbigerum and coccineum
B

This was posted in an Australasian Facebook forum a couple days ago. It was thrilled because there’s also one for insigne (I have a mystery, bowdlerized-label insigne).

I agree with Pherd. The separation of varieties is important to distinguish the various types of villosums based on color markings, localities and genetic isolation evolution. They are all in the villosum complex and descend from the same ancestor. Like many of the complexes in the Paphiopedilum alliance, many have been elevated to species level, even though they started as mere variants of the type species. For example, we have new species outlaid in the recent Orchid Digest (2019 Volume 82-4) Paphiopedilum Annotations by Koopowitz that introduce the following gratixianum (also of the villosum complex) and villosum types as their own species ranking; christensonianum, cornuatum, daoense, denssisinum, guangdongense, and stenolobum. To keep these varieties named and separated are the key to maintaining species purity and correct registration of future hybrids.

Thanks to Hien for the article links.

And a nice pic of the var annamense from BrucherT. Might be villosum var fusco-roseum too.

Elf, if the leaves of the flower you showed have narrow leaves (less than 4 cm) and finely spotted, it may be a Paph. christensonianum or Paph. villosum fusco-roseum, and not annamense?

Jens, the official name for this variety is laichaunum based on the description on Die Orchidee by Olaf Gruss et al as well as on the offical WCSP (World Checklist in Kew).

Phred, I sent a message to AOS to clarify these issues with the previous awards mislabeled as annamense. As well as to ask what to do when I bring the plants in for judging this coming weekend (if I should label as laichaunum even though tag says annamense). I will keep you posted on this thread.

I stand corrected and bow in deference: laichauanum seems to be the validly published epithet...var. laichauense thus reduced to synonymity!

Jens, no need to bow in a healthy discussion and clarification of points discussed. All done in good faith and love of taxonomy!

I received message back from the AOS that the plants should be labeled correctly as var laichaunum. Wish me luck for judging on Saturday!

BTW does any own the var boxalii (syn. atratum)? I am looking for one with great markings like the one below on left pic from Orchids Limited.

not willing to crap shoot on their seedlings?.... 85$ seems in line with the rest of their pricing ;-)

I have very limited room to try to gamble. If they were albums yes, but nowadays I just procure the best ones LOL.

DrLeslieEe said:
Elf, if the leaves of the flower you showed have narrow leaves (less than 4 cm) and finely spotted, it may be a Paph. christensonianum or Paph. villosum fusco-roseum, and not annamense?
Click to expand...

Hmmm no spotting? Could be var fusco roseum then?

Unfortunately no awards to neither villosum var laichaunums. Flowers too small as first bloom seedlings. Next time. There were other same types there too. The judges had a great time relearning the new type vs annamense...

Here are pics at judging of other 2 there for comparison. None got awarded for now. 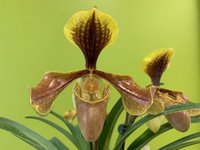 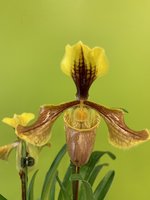 DrLeslieEe said:
Hmmm no spotting? Could be var fusco roseum then?
Click to expand...

That makes sense - in the nighttime flash photo I posted, the colors look much more intense than in daylight - I would say that the flower has an overall sort of dull pink color in the daylight - which translates to fusco roseum. Are there any other distinguishing factors to consider? Thanks for your knowledge on this topic!

Perhaps you can post day pics of flowers, plant and leave base? Let’s get a closer look

DrLeslieEe said:
Perhaps you can post day pics of flowers, plant and leave base? Let’s get a closer look
Click to expand...

I absolutely will do that tomorrow

DrLeslieEe said:
Perhaps you can post day pics of flowers, plant and leave base? Let’s get a closer look
Click to expand...

Here's my plant in question, and the first photo best demonstrates its natural daylight colors. The second photo (side view) best demonstrates its proportions. The foliage is 2.5cm at the widest point, and the flower is about 8cm both tall and wide. I got it from a lovely gentleman at an orchid society show this spring, labeled with just villosum. Thanks for your expertise in looking at this one!

Better pics in daylight.It does look like the base of narrow leaves have light spotting. That combined with the white dorsal sepal and the red patch through the center gives this the var annamense type to me. Let's see what other think?

Ozpaph, I myself am a lumper. I consider all villosums, each with their distinct varieties. I don't think using phenotypes of floral colours and leaf width a good determination of raising them to species level, particularly if they can be distinctly traced to a recent common ancestor. That's just my opinion.
B

White and cranberry dorsal = annamense, as far as I know.

Perhaps Olaf may give input if he is still on here?