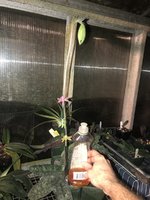 Does anyone have any info or a pic of paph maculatum? I can’t find anything on it. It’s clearly a parvi, but all I can find with that species name is an oncidium. It could be a variety name of a parvisepilum? I’m guessing malipoense since the spike is so tall. Thanks

i've never heard of Paph maculatum
it's appearance suggests to me that it could be a malipoense or a related plant
are the leaves at all wavy in appearance? i believe that's something that Paph malipoense does

Yea the lead margins are wavy, but that is a characteristic that polyploids also possess. The other phenotype that this plant has in common with or is typical of polyploids is the low ratio between the lead width vs the length. In other words the plants leaves are twice the width of any other normal parvisepilum....at least any one I have seen. 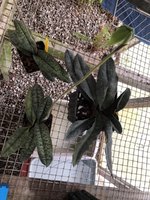 This is an interesting example of what I was discussing above about polyploidy. The thee plants in this pic are all malipoense, but the 2 in spike are clearly different from the other one. The larger plant is most certainly a polyploid, while the two in spike probably are not, but they have most certainly at least been line bred and they might be 3 or 4N. They are great plants, but the difference between line breeding and polyploidy can be staggering.

the two on the right have leaves that dont look like malipoense. The one on the left looks typical.

The dark one looks like the malipoense I used to have.
Don

Have you bloomed those two smaller plants that are in bud or seen the flowers on them yet? It will be interesting to see photos of them once they're open.

The foliage of the suggested polyploid example looks like pretty much all of my P. malipoense in terms of presumed size and degree of leaf margin undulation, where as the smaller ones you suggest may not be polyploid look a lot like some of my P. Norito Hasegawa and similar hybrids in terms of the smaller size and reduced or non-existent leaf margin undulation. Keeping in mind that it's hard to gauge things from a couple of photos, so obviously I wouldn't stake my life on their ID.

According to the KEW Plant List there is no species with the name of Paphiopedilum maculatum. Have yourself a look at http://www.theplantlist.org/
IMHO all three are P. malipoense.....but the patterns on the mottled leaves of malipoense have a great varity, therefore you can't be sure you to determine a plant by its leaves.
Last edited: Jan 12, 2020
B

One year ago, Hausermann’s had a whole quarter table full of malipoense that looked like your big plant here, many in spike, for $20 each. I passed because they had mealybug.

So lots of questions. The smaller 2 plants are both sending up their first spikes so we have yet to see them. Like I mentioned I believe the smaller ones have been line bred, but they both have wavy margins. The three plants in the 2nd picture are all maliopoense for sure, it’s the plant in the first pic that I’m unsure about. It’s labeled maculatum, but I can’t find any reference for it at all. Funny thing....another plant in the collection I inherited was labeled bodogomi (sp) and I couldn’t find it anywhere either until finally when I realize it was paph praestans v. Bodogomi (again sp). I have searched for maculatum as a variety and can’t find it listed either. I will certainly upload a picture as soon as it’s open . I will also upload the malipoense flowers when they open.

I might repeat some of the things that others have already pointed out.
First off, unless chromosome counts have been performed, polyploid should not be a guess work based on the appearance. Call it 3N or 4N only if it is. If not confirmed, then, they should never be called as such.

Now, the wavy edge is typical of malipoense and has nothing to do with 4N. Also, the degree to which the leaf margin is wavy is highly variable among the individual plants. The species in general run on the large side. So, none of the things that have been said regarding your larger plant is out of ordinary for malipoense. Some are smaller and others are larger.
The plant in spike in your very first photo looks very much like typical malipoense to me.
Also, your two smaller plants are smaller than the average for the species.