I've had this one for quite a while and nearly lost it to root rot. It is slowly coming around and blooming for the first time in years. 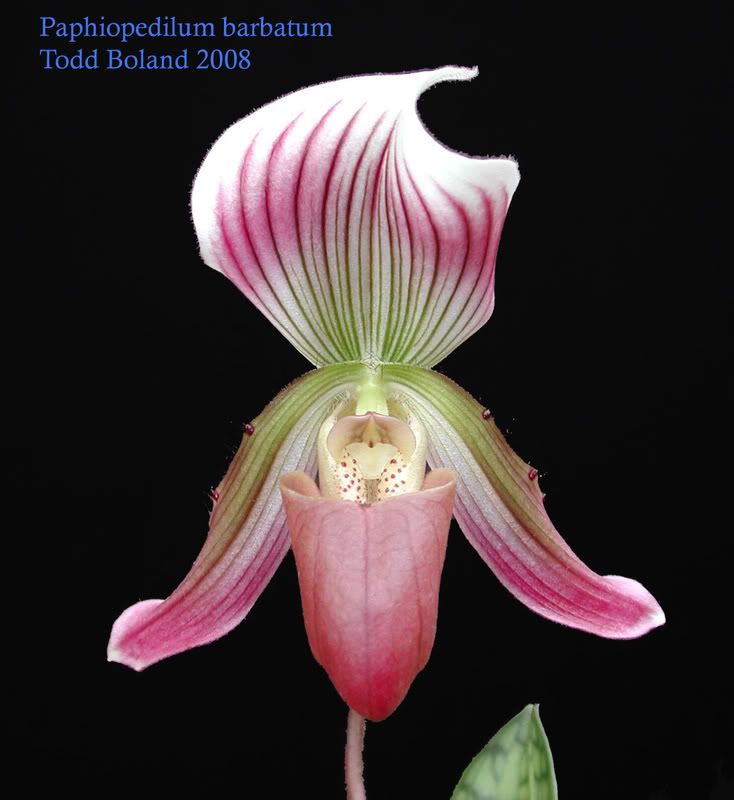 Fortunately it survived the root rot and rewards you now with a beautiful flower. On the first sight I wasn't really sure whether it is P. barbatum or perhaps P. callosum var. sublaeve because the shape of the dorsal and the stance of the petals made me think of this. But the staminode is not P. callosum like.
BTW great photo too.
Best regards from Germany, GuRu
B

Nice colour and exellent photo - and it looks a bit drunk as I am right now:rollhappy:
P

I agree with the question of it being a callosum. Here's my barbatum for comaprison.

I believe it to callosum as well, the stamie looks like my callosum
C

Candace said:
I agree with the question of it being a callosum. Here's my barbatum for comaprison.

Of course that is contingent upon Candace's actually being barbatum.oke:
Too bad we can't just politely ask the plant and have it whisper the answer in our ear.
B

Here is my callosum from spring 2007. 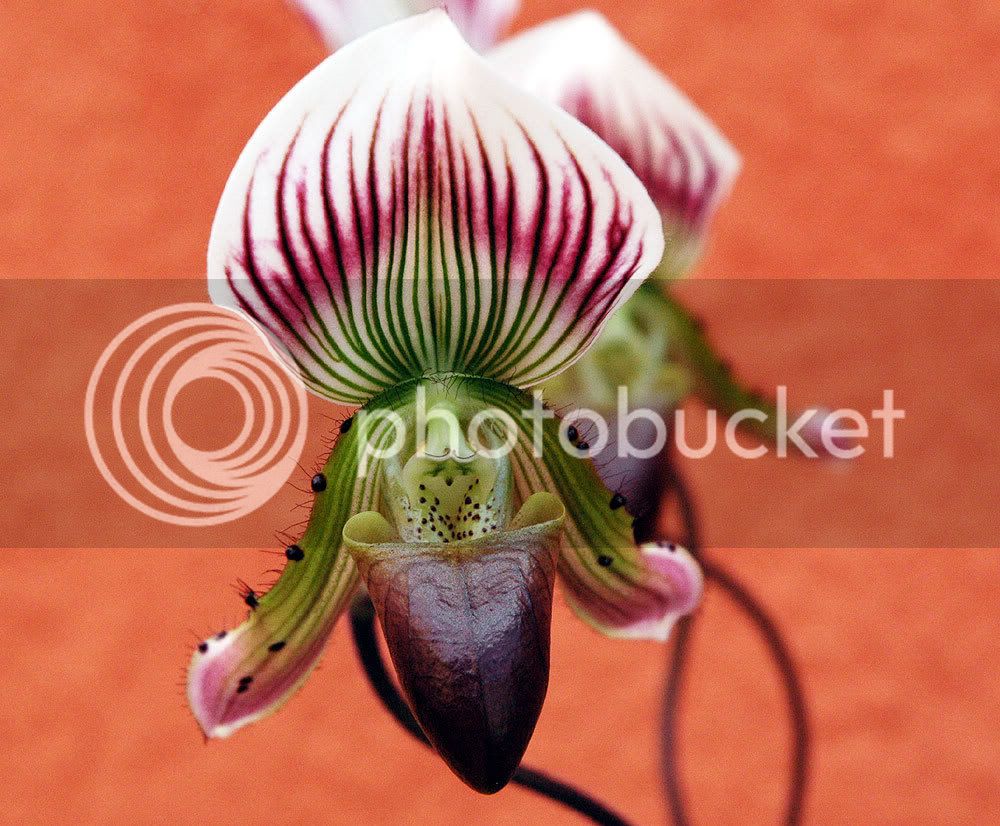 Well, cdub since it's a named clone from a specialty paph breeder and it looks like all the other barbatums I've seen, I'm thinking mine is labelled correctly;>

Well, it looks like I have two callosums then. Here is my callosum from earlier the summer. This one is sublaeve and the flowers are twice as large as my so-called barbatum. 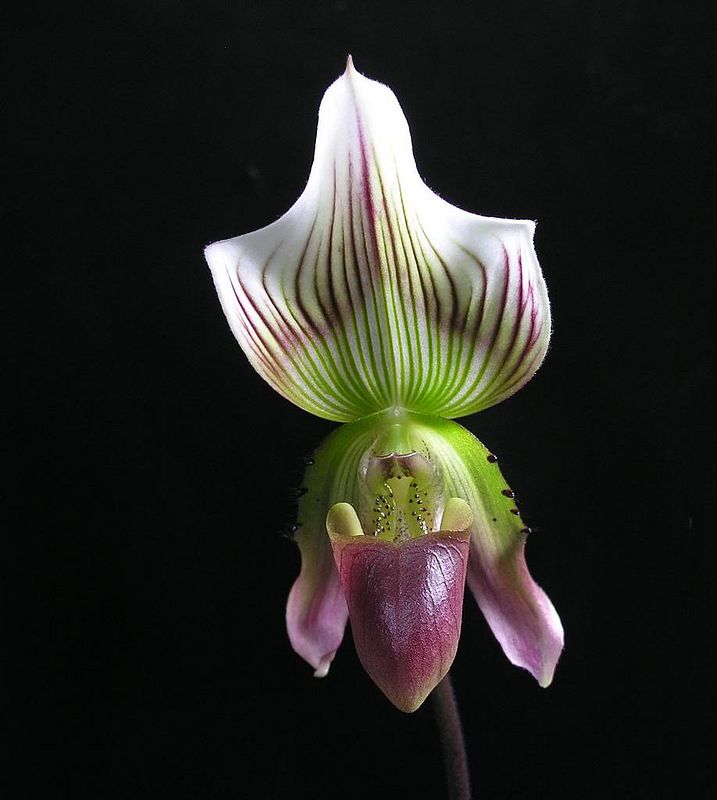 Candace...your plant is beautiful, but it does not look like barbatum to me. Looks more like a hybrid........Take care, Eric

Eric, have you googled it? Mine looks just like all the others on the net, maybe a bit lighter than some, but I don't see any "hybrid" in it. I think barbatum is somewhat variable.

Here are a few others that look like mine. 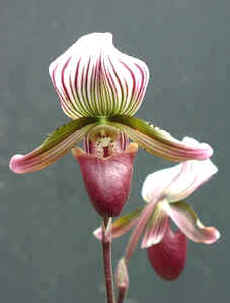 Well, barbatum and callosum aren't species I'm Really really into, so I haven't looked at enough to have an opinion of any worth, but I did wonder seeing the picture...here's some pics of my barbatum from OL if that adds anything for ppl more familiar w/ the details of these 2 species...and now I'm gonna go cry a little cuz I thought it was a pretty nice barbatum, but it succumbed to dorm room environment before I moved out and got an apartment where I could control things better:sob:
close

closer - I really like this shot, but of course you can see the color went a little red, the color is correct in the top picture though.

The staminodes of lawrencianum and barbatum are more similar than to callosum, and should have a prominent projection pointing down on the lower edge near the center of the notch.

That being said, the range of collosum var. sublaeve is contiguous with barbatum, and there are intergrades of the two where the range overlaps. That's probably a good indication that barbatum is probably just another variety of callosum. Maybe someday they will do some DNA work to find out how far apart they really are.
R

So far Miss Paphiopedilums OL barbatum comes the closest to the taxonomic description. The sparse warts on the upper edge of petals held straight out, and the tab on the staminode are quite visible.

Candace, sorry to say but I agree with Eric. There are way too many spots on the petals for a straight barbatum. Here are two barbatums to view.
#1. barbatum 'Barbara'

Well crap, is this the year of mislabeled paphs for me or what? I have to say...out of all the orchids I've owned through the years paphs tend to be the most f*cked up label wise..you buy from reputable "breeders" and growers and consistently they're still not what you're supposed to be buying. Sorry to vent, but this is like the 3rd questionable paph this month for me. Looks like you're right Eric!

Candace, your not on your own getting miss labelled plants. I bought 100 seedlings of near blooming size from a nursery, nearly all Maudiae types.
The rest were heavy sukhakulii influence. Some of the vini colour mauds have the best plain green leaves you'll see, I think I have 6 Brachy or Brachy cross ???? with possibly some sequential and multifloras thrown in. In fact I think there is nice P. lowii in there coz it looks exactly like some I have of the same size I know are lowii. I also bought some divisions and the first one to flower P. tonsum v Curtisifolium turned out to be the roughest alba maudiae I've seen. Funny, this nursery no longer sells Paphs.