A rather new hybrid that I got from Terry Glancy at Pine Ridge Orchids. The color is alot deeper.... but new camera. 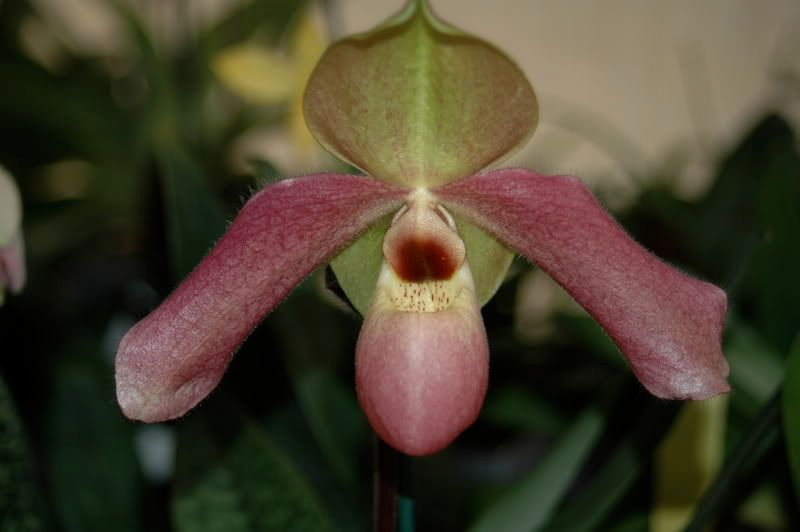 cute...what cross is this blake?

I do like what viet. brings to it's hybrids. Nice job, Blake...I mean Terry.

Very interesting.
I love the combination of colors.
N

Hmmm, looks kind of like the delenatii x moquettianum.

By the way, this is a LEGAL cross made with a vietnamense from Antec.
G

bwester said:
By the way, this is a LEGAL cross made with a vietnamense from Antec.
Click to expand...

They all are. oke:
B

By the way, this is a LEGAL cross made with a vietnamense from Antec.
Click to expand...

You may very well find out by posting it to the internet, Blake. The plant didn't originate with us, and if it has been made with Paph. vietnamense we released, flasked and grown to blooming, well that's pretty amazing growing. We did make some hybrids with extra Vietnamense pollen, and a few flasks have been sold which we were asked to keep careful track of just like the original vietnamense flasks. This was not a cross we would make with the precious pollen. Were you told the plant originated from us?

That's what they all say. oke:

Damn it Lance, go back to your tiger penis and quit poking me!!!
and here take this oke:
and this oke:
one more oke:

just messin with ya, btw.
G

bwester said:
Damn it Lance, go back to your tiger penis and quit poking me!!!
and here take this oke:
and this oke:
one more oke:

BTW the orchid police are on the way.
B

Well, Eric, even if that is so Blake has nothing to much to worry about if he is polite, it is obvious that legit plant or not he operated well intentioned. They will ask to see the plant and any paperwork, ask the origin, and most likely inform him he is not to sell or otherwise dispose of the plant because it is potential evidence. That has been the case that has been reported back to me by some who have had these visits. The sad part is, and I won't explain the why's or how's, those that know me won't need them, we probably would have all of these plants (the Vietnamese species) and then the hybrids already available if it weren't for the nonsense, greed and jealousy of what I hope is a minority of our community. BTW, the "orchid police" are folks doing their job, and human beings. I have had several visits from them that have ranged from just wanting to learn something about the plants, will you show me, to a bit more tense, probably because I like to be the only one wearing a sidearm in my greenhouse One person I know was nasty to an agent, and the agent told me what he planned and had the right to do, that what could have been resolved with a violation appearance ticket would end up felony charges and a friday night arrest when a Federal Judge would not be available for bail until Monday. I was able to talk the agent down, explaining some of the circumstances that probably led to this persons nastiness. Of course, later this person, who knew I helped him out, strongly implied that it was somehow my fault he had sold illegal Ho Chi Minh hybrids on ebay before we had even released them. It's always all my fault. Now having said all this, I do my best these days to ignore all of the nonsense of all of these illegal plants being sold, anyone with any time growing knows how fast they grow, how long it takes to get seed pods and compots and adult plants etc. Do what you want, but don't put my name or my business name in association with it unless it is true. Then I get pissed. (Blake, that ws not aimed at you, you just repeated what you were told, but think about what is possible). If your thinking, boy, is he overly sensitive, let me give you one of dozens of incidents we have had. A vendor that not too distant, well known, told one of our customers who he knew regularly visited us, that something like legally reproducing Paph. vietnamense could get our wells poisened with herbicides. Isn't it a lovely idea that you have to weld your well caps shut so that you do not have to worry that your family, animals and plants will be poisoned. Over plant envy?? Why to hell does this go on? Do many people consider this a competitive sport, full contact? They are not the people I appreciate. Good God, we've had people have to have guards at judgings in Florida over such nonsense. Okay, I'll chill now and get my work done. I will come back with pleasant or good news next time I ever post again.

Actually, I really enjoyed reading that, Bob. We don't often hear about what goes on behind the scenes, or what to expect/how to behave should someone pay us a visit. It is valuable information to know.

I personally don't have any vietnamense hybrids, but I do have a kovachii hybrid seedling and I have my certificate of legality well filed in a safe and unforgetable place just in case I ever need it.

Amen Bob,
you know I have been on the sidelines watching all this nonsense for all these years. It sucks. And it hasn't lessened any, attention is shifted to kovachii, but with a whole new crop of idiots, plus the same old jerks are all swirling around. Sometimes I think I should just go back to raising only bonsai. But in that group, theft of champion trees is a real problem. Side arms necessary. Maybe I should just raise African Violets? Naw, too boring. How about hallucinogenic cactus? Damn, while fun it would require fire-arms again. Guess I will stay with orchids. (mostly because I'm a lousy shot with a pistol)
Leo

Naming of Paph. anitum progeny on the RHS app