The story of this plant started allmost two years ago. I picked it up from a fellow hobbyist at the annual Orchid event that's hosted by the Dutch Orchid society.

Here's the link to the thread in which I shared my purchases with you all:

The plant a few days after I bought it: 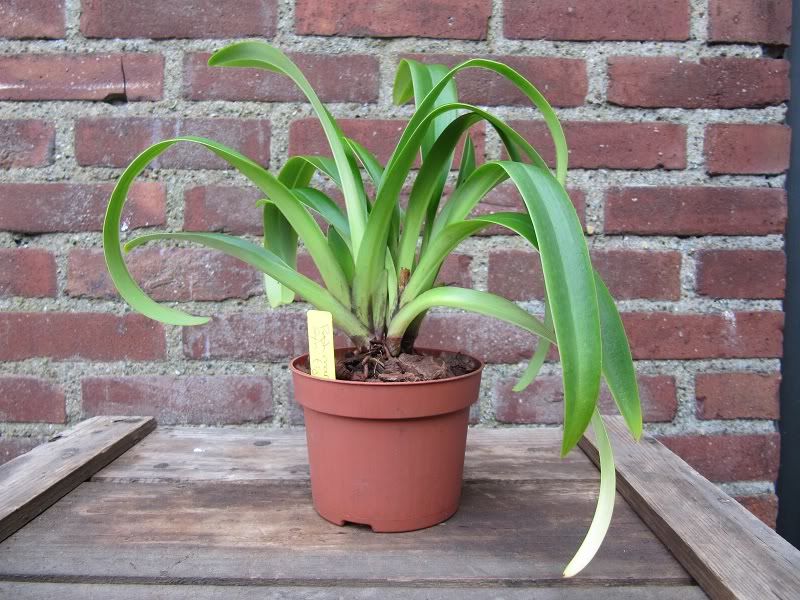 Since then I've been treating it as the most precious plant in my collection and giving it as much TLC as I can. In the year 2012 it grew, produced some new growths but no flowers. So I still wasn't sure if it was a real tigrinum yes or no. I still couldn't believe that I bought such a big tiger.....

The 2013 came and in the beginning of this year I noticed two sheaths slowly forming. As I heard so many horror stories of bud blast I was so worried that it might to my plant as well. So I ended up keeping it on the dry side and only watering once every 2 weeks and even then the pot was only dipped once in a bucket with water.

To my great surprise in the weeks there after I discovered even more sheaths emerging and I ended up with the great total of 4 sheaths. As the inflorescence started rising I staked them all, just for extra stability in case someone would bump against them.

During this whole period I didn't take any photo's and I didn't inform you guys. I was too worried that I actually might jinx it.

In the beginning of June the first bud started to open and I checked it every few hours and slowly saw it open. When the dorsal sepals started opening I was a very happy panda as the plant that I bought in 2011 turned out to be a real tiger!

As there are some minor differences between the flowers I actually took one of each flower.

And another shot of one of the flowers I allready posted:

For me this is the biggest accomplishment I have reached as far as Orchid growing is concerned. If I had the opportunity to have it properly judged I would but this probably wont happen. I've also never seen a picture of a tigrinum in cultivation by a hobbyist with more then 2 flowers on a single plant. So that makes me extra happy! :drool:

However there is something that made me even happier this year!
H

WAY TO GO MARC!!!! That is so AWESOME! Keep up the good growin'!
Another one I'm jealous & envious of!
N

Well done. I guess it really was a good acquisition! BTW, that would be a $400 plant here.
The color is not the best, but 4 flowers and good markings would influence the judges.

Great growing sir! :clap: CCE, it should be.
T

Its a great feeling when all your care given to plant pays off like this.:clap:
A triumph!! Congaratulations and I'm full of envy.

WOW WOW WOW!!!
That has to be one of the best, if not the best, tigrinum ever. Just gorgeous.
Yes -- have it judged!

WOW. That is wonderful. Great growing and good effort not to blast them.

So what they say about growing dry during bud formation is true, I'll be damn! Congratulations Marc! A job well done!!
A

What a wonderful accomplishment! The blooms are beautiful and I finally
see that the name is justified...it does look tigerish.

Marc, congratulations both with your son and your accomplsihment (tigers). I really cannot understand how you did that! I am struggling myself to keep rot at bay. So far my two seedlings (two-three years old) have pushed buds, but they are soooo slow. No blast so far though. I do however not keep them dry, after all, where they come from its rainy season now! With lots of water from above, so if they blast etc. it must be due to some other cultural thing.


SlipperKing said:
So what they say about growing dry during bud formation is true, I'll be damn! Congratulations Marc! A job well done!!
Click to expand...

Thanks everyone for the compliments

.....So I ended up keeping it on the dry side and only watering once every 2 weeks and even then the pot was only dipped once in a bucket with water. ......
Click to expand...

A bit of info about how I grow this plant

The plant is potted in a substrate that consists mostly of bark but I've also added in spagnum and perlite. Ratio about 80-10-10 I would guess.
The plant is grown on the windowsill of an east facing window. Temperatures in the summer are quite high, but during the winter I struggle to keep the temperature above 15C during the night.

During this winter time I keep all my paphs on the drier side to prevent them from rotting away. So my tigrinum gets this same treatment. This year when the sheaths started emerging I really under watered this plant. One quick dip in a bucket every 2 weeks and I only started watering heavier when the buds had cleared the growths.

As with all my Orchids I watered the plant by hand, so no hosing down the plants. Big advantage is no water in the axil of the growths. Disadvantage costs a lot of time. ( But on windowsills not an option either )

The fertilizer I use is K-Lite.

Thanks Marc,
dry, cool season makes sense. Personally I treat them similarly, but water overhead with a hose. No signs yet of bud-blast, the buds have started to come up. But I have an issue with rot (erwinia?) when temperatures increase.

That is very, very nice. congratulations

It's rare to see many specimen sized paphs in general, but I've never seen a tigrinum specimen like yours. Well done!

An extra plant and flowering, congratulations Marc for its culture! Is it at Utrecht that you bought this plant?

Paph. villosum var. annamense (or not)